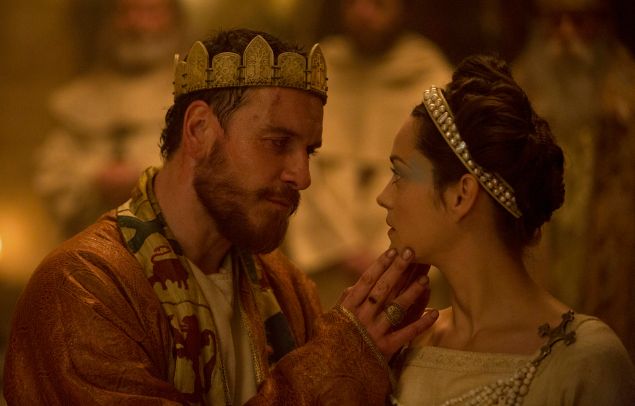 Macbeth is one of Shakespeare’s dullest and shortest history plays, in addition to being the most dangerous. Theater legend is rife with so many tales of unlucky productions plagued by fatal accidents, illness, postponed opening nights, cancellations and worse, that upon hearing of another Macbeth, a lot of superstitious actors head for the exit doors. Michael Fassbender is a brave soul.  His Macbeth is a far cry from the ill-fated Orson Welles movie, filmed in 1948 on the Roy Rogers western sets at Republic Studios, but not as powerful as Roman Polanski’s 1971 version. It lies somewhere in between, violent and inarticulate, a true tale of sound and fury, signifying nothing.

For the uninitiated, Macbeth is the troubled and sometimes confusing narrative about ambition, murder, rage and tyranny that unfolds in a bloodbath of brutal glory in 11th century Scotland, where ghosts roamed the countryside, witches predicted the future and no one was safe from the sword, including the king. Filmed on the Isle of Skye, where it is freezing cold even in the middle of August, by Australian director Justin Kurzel, when you see the stars, Michael Fassbender and Marion Cotillard, barefoot and scantily clad, splashing around in the mud and water, you can feel their pain. Shot in grim mists, windswept bogs and dark moors, it reminded me more of Mad Max than Macbeth.

But the antique weapons, ancient mud-splattered costumes and faces so caked with dirt that the expressions are often obliterated make this a visceral Macbeth, if far from flawless in other areas. Filled with images of death and grieving, the film begins with the funeral of the Macbeths’ baby, a tragedy that sets in motion the madness that follows them from one crime to the next.  Years of bad luck and misfortune follow as Macbeth joins the civil war in allegiance to King Duncan and becomes the Thane of Cawdor, but has ambitions far beyond property and wealth. Stop-motion photography accentuates the battles as blood spurts and blades clash. On the battlefield, the witches appear from the smoke, predicting Macbeth will someday be king. They are different from any witches anyone has ever seen before. Gone is the toil and trouble they rant about, as well as the fire that burns and the cauldron that bubbles. These hags are just peasants gone to seed. One is a child and another nurses a baby.

In fact, just about everyone in this Macbeth is so grotesquely disguised and shot from so many weird angles in distorted close-ups that they look like they’re attending a black mass. The political conflicts and religious paranoia of an ancient civil war are relegated to a few sentences in a brief foreword. From there, vagueness reigns. Mr. Fassbender as the cold-blooded, ruthless nobleman desperate for a crown, and Marion Cotillard as his wicked, guilt-ridden wife who goads and pushes him to fulfill her own destiny while the corpses pile up around them, play famous roles less like the power-hungry fun couple they’ve been traditionally labeled, and more like psychos in the grip of ascending madness. Eliminating every adversary who stands between them and the throne, they stab Duncan (David Thewlis, as a rather naive king) in bed, burn the family of MacDuff (Sean Harris) at the stake, and the final fight sequence between Macbeth and MacDuff, as a nose is crushed into bloody hamburger and Macbeth is disemboweled, is as brutal as any horror flick.

Sometimes, in the most famous speeches, the camera focuses on clouds instead of faces. Coarse accents make the Bard’s dialogue (rewritten by three screenwriters) harder than ever to understand. Marion Cotillard’s French accent complicates things even more. Her haggard, pop-eyed Lady Macbeth reveals so little character that you never really understand why she goes loopy. You never see where her influence over her husband comes from. And why does she deliver the “Out, damn spot!” speech to a child?

This is a disappointing Macbeth that may not possess the searching insight or the dramatic clarity one might desire, but it has a lot of feudal spectacle and a nightmarish mood worthy of awe when all else fails. In fact, the theatricality dominates, leaving Shakespeare in the shadows and Dunsinane Castle looking more like a cave in Carlsbad Caverns than a prime piece of Scottish real estate. 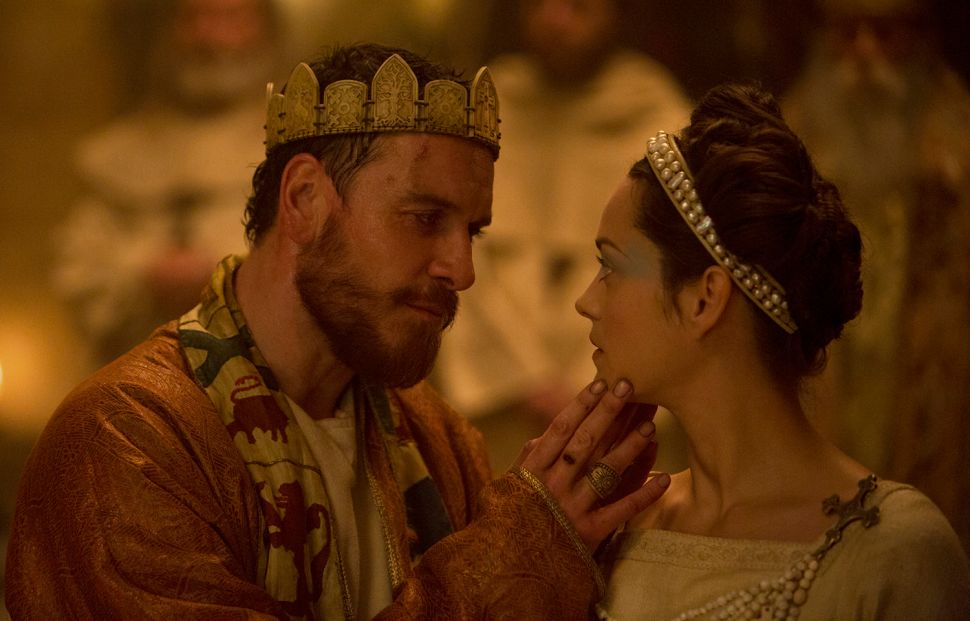