Tom Wolfe called it “The running of the billionaires.” It’s the moment every year at Art Basel Miami Beach art fair when the doors open and the VIP guests stream in. It is possibly the fanciest and most expensive art fair in the world, and it opened at 11 a.m. today.

As the line began to move, “What kind of TV are you going to buy?” a woman at the back called out to a friend.

Yes, this is the Black Friday of the art world, the scrum to buy the deals, to find the finds, to see the masterpieces. Arnold Lehman, just recently retired from running the Brooklyn Museum and now a consultant at Phillips auction house, was one of the first VIPs across the threshold. He favored a Barbara Kruger in Skarstedt’s booth, and noted: “Seeing the art is equally as exciting as seeing the people. It’s like a family reunion!” Hollywood-type celebs in early included Leo DiCaprio, Elle Macpherson and, lounging in the VIP room, Lenny Kravitz.

Shoppers were positive–but “tame” is a word that came up a lot. With its 250-plus booths, the fair offers a snapshot of what is desired at the moment, and of the moment. The big picture was that dealers seemed determined to sell big-ticket blue-chip Abstractionism into the last gasp or two of a frothy art market.

So, trends: Classics are in, and there was a small smattering of classics by women artists– a rare Kiki Smith stood out at Pace; video art is out, not too many mirrors (some years it’s all mirrors). There’s a decent amount of art influenced by or about technology. Lot’s of photo-based work. Topic-wise, a little bit of sex, not much politics. Nothing is cheap: six-figure price tags are routine. In the first few hours, dealers report sales but it’s not a blowout.

The CEO of the Speed Art Museum said he and his team were at Art Basel Miami to nab some contemporary art for the collection at the soon to be reopened museum in Louisville, Ky. The institution, which will double in size with this recent renovation, will open in March 2016.

“We decided to celebrate the collection,” said the CEO, Ghislain d’Humieres, since 50 percent of has not been seen before. So far they have a new Lorna Simpson, an Anish Kapoor and work from The Propeller Group for the permanent collection. And they are planning two site specific pieces for the reopening, including a Bryan Knepp new media piece and a Matthew Moore commissioned work that is about the “dark but important” Kentucky tobacco industry, Speed curator Miranda Lash told the Observer.

A trio of New York collectors and friends toured the floor: sisters Belinda and Melissa Neumann, daughters of super-prominent and active art collector Hubert Neumann, and Alison Katz Wolfson, who noted “the fair used to be more edgy. The booths are so expensive now!” and too much of the art is “redundant and derivative.”  Belinda was equally critical, noting “The only thing I liked was the Luhring Augustine booth… [upon reflection, actually] The Mangold booth was gorgeous.”

Walking the floor, noted German artist Bodo Korsig, whose exhibition opens at the city’s Museum of Contemporary Art in September said: “It’s very scary as an artist because everybody is trying to make money and there’s only one cake [to slice]. Everybody talks not about the theme of the art, about the motivation. You make art because you have something to say, otherwise you would work in the real estate market.”

Our favorites so far, and more to come:

Tobias Rehberger at Foundation Beyeler (more of a museum than a gallery, but named after an art dealer): The walls simply looked like they were covered with abstract blocks of color, but if you step back, or take a photo, it’s a giant mural of people having sex.

The Paul Kasmin booth was gorgeous, with works by Kenneth Noland, Robert Motherwell, Frank Stella and Constantin Brancusi. Soothing and breathtaking at the same time. Gladstone was excellent–no surprise, and Gagosian had, among other highlights, a beautiful Warhol Liz Taylor. Michael Craig Martin shone at Alan Cristea of London. There were gorgeous Matisse drawings and a powerhouse Calder mobile at Nahmad Gallery, now just dubbed HN. 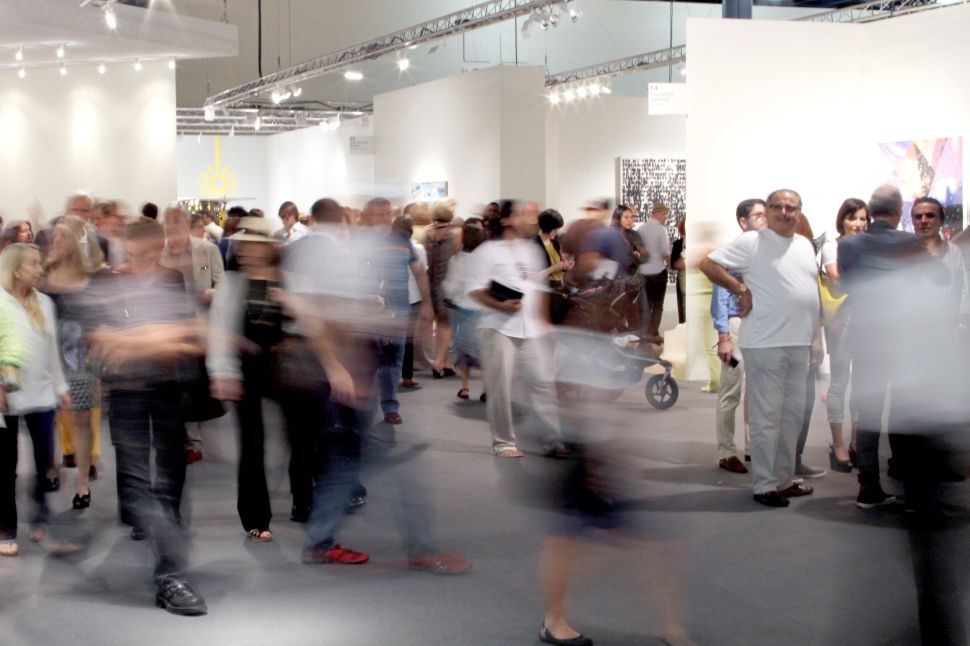