You know, I never really “got” the whole Matt Bomer thing. Maybe it’s because I can’t tell White Collar from The Mentalist from the mid-aughts classic Lie to Me, and am thus always getting Bomer confused with Simon Baker, or Tim Roth, or anyone from the billion of other “police consultant” dramas out there. I mean, I’ve walked past pictures of White Collar before and thought “Wow, that guy from American Beauty is getting work again, that’s so great!” I mean, technically I was mistaken…or was I just SUPER prescient about the fact that one day a show would come along that would call for the skills and remarkably similar looks of Wes Bentley and Bomer? Who is to say, really?

Anyway: Matt Bomer is attractive in that CW-dude way. He looks like if you ripped his shirt off, he’d be as gleaming and hairless as a newborn seal. (I imagine Bentley having Jason Schwartzman-level fluffs of hair growing in odd places.) Since the first example of Bomer’s acting prowess was watching him play “Dead Male Hooker #1” in last season’s Freak Show, and that the only thing I’ve seen him in subsequently is Hotel, you could forgive me a little “meh-ness” about the guy. It’s not that he isn’t attractive, because he is, in a bland, Bateman way. I just don’t find him particularly interesting or good. If we had an American Horror Story spectrum that had Evan Peters on one side and Finn Wittrock on the other, and the spectrum was called something like, I dunno, “People Drew Would Kill For” vs “People Drew Wants to Kill, Okay, Maybe ‘Kill is Too Strong A Word, But Maybe Just Go Away Forever?”, Matt Bomer would land somewhere squarely in the middle.

UNTIL THIS WEEK’S EPISODE. DUH-DUH-DUH.

I mean first off, we just don’t have much going on in the Cortez these days. Iris is a vampire, but is busy making her own eulogy video (who ever knew she was such a big cats and rainbows person?) Liv Taylor is meeting her son, who hasn’t seen her in 33 years or something. That’s basically it, in terms of plot development before the third act. Oh yeah, John Lowe still might not be aware of the vampire situation yet? Or maybe he did and just forgot it, but either way he gets mad when Alex shows up as vampire, Sookie, and tells him Haden is still alive (kinda) and living under the same roof as dada. He’s all “You let me believe he was a hallucination,” and for some reason Alex doesn’t immediately respond with “And you’re a serial killer with frequent blackout spells, so “let” is kind of a strong word in this scenario, brah.” And hey, technically when she told him Haden was a hallucination, she definitely thought he was. She just forgot to update her soon-to-be-ex husband on the status change. (Scarlett, the Lowe’s other kid, is mentioned briefly and in passing, and that little nod to their only living-ish child who is far too young to be alone and far too traumatized by mommy’s vampirism and daddy’s discharging a gun and a deformed monster baby in their living room is just the type LOL-parenting style we’ve come to expect from these two.

But anyway, that’s all on their end. In exchange for sexual intercourse, John helps track down the bunch of vampire children she accidentally turned, and one dies of measles (sad) and another one—the red-haired kid who played Drew in the Wet Hot American Summer TV show and is just popping up everywhere these days—kind of smells a rat when the nice nurse lady rounds them all up and takes them to a hotel, where she brings them to a steel-reinforced door that leads to a dark, endless hallway and tells them to go have fun.

“Uh?” says the red-haired kid, but he gets pushed in anyway. Jesus, these two make the Volturi’s extermination of the Immortal Children look like helicopter parenting. (That’s a Twilight: Breaking Dawn 2 reference, for all you Team Edward fans.)

MEANWHILE THOUGH! Matt Bomer dances to Drake’s “Hotline Bling” for like a good 60 seconds this week, and it’s AH-MAZING. (Sorry for the shit quality of the video, though!)
[youtube https://www.youtube.com/watch?v=85qRDPjV4lM]

Also, Donovan as a character has stepped up his game this week: going out in broad daylight (wait, doesn’t that like, weaken even these not-playing-by-the-rules vampires?) and killing Valentino with a gun-vs-sword fight that was exactly like the one from Indiana Jones.
[youtube https://www.youtube.com/watch?v=anEuw8F8cpE]

Turns out Donovan just wants the Countess to kill him, which she prepares to do, not remembering the advice of her first husband to stop killing love interests in the building, where they inevitably turn into super annoying ghosts. (See: Will Drake.)

BUT THEN! Liz Taylor and Iris come in, guns blazing! They shoot a bunch of times and it’s a cliff-hanger, I guess, because you don’t see if anyone got shot. (Vampires are not bullet-proof, as we keep being reminded.) But come on, this isn’t Pulp Fiction. No way any of those bullets missed BOTH of them. My money is on Donovan dying and the Countess living, and then five minutes later Donovan coming back completely fine as a ghost and being horrified that his one means of escape just doomed him to an eternity trapped in the prison of the hotel.

Speaking of prisons, nice job Liz Taylor: she finally reconnected with her son, who is more accepting of his parent’s trans status (and also, total abandonment) than a Pfefferman, but then immediately starts murdering his employers. What’s the endgame here? I mean, now he gets to go to prison for murder. Or vampire prison for vampire murderers. (That happened on True Blood, right?)

So: way to go, bad decisions all around, but at least I changed my mind about Bomer, right?? 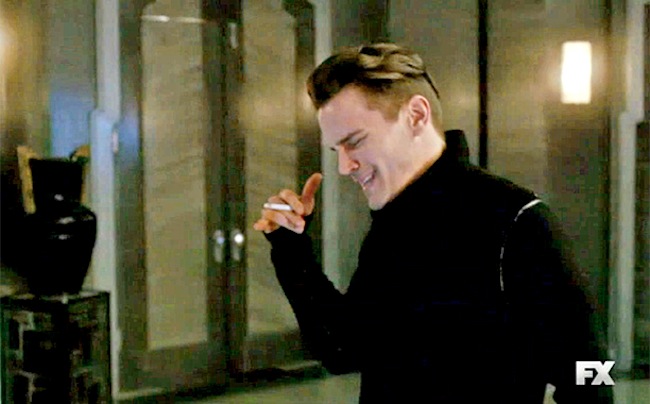