Maybe it’s because director Michael Hurst (Spartacus, Xena: Warrior Princess) and relatively unknown writer Nate Crocker were the first Ash vs. Evil Dead duo to truly get the balance of the blood-soaked slapstick that is the Evil Dead aesthetic. Maybe it’s that this episode rounded off to the sound of Styx’s “Renegade,” a tune made to play as Ash Williams walks away  from a pile of corpses. Or maybe it was the sight of a teenager being launched into a ceiling fan. Whatever the reason, if you stayed in on this particularly cold winter Saturday to watch “The Killer of Killers,” you were treated to Ash vs. Evil Dead‘s finest outing yet, a non-stop delight as bloody as it was hilarious.

But first, a visual call-back to Army of Darkness. 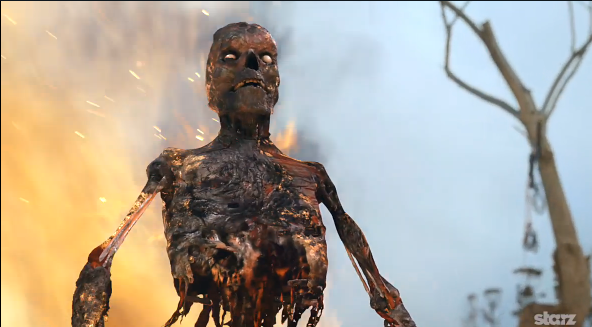 Jill Marie Jones’ Detective Amanda Fisher and Lucy Lawless’ Ruby Knowby arrive at Brujo’s compound, just missing Ash and Co. but finding a walking skeleton fresh off the funeral pyre, minus a layer of skin or three. And just as we get some veiled backstory on Ruby from ol’ toasty –“Ruby, you double-crosser, the others will never let you get the book for yourself–back onto the pyre they both go. Is this the last we see of Ruby? Probaaaably not, but for now she’s toast in every sense of the word.

Meanwhile, over a pancake meal he definitely didn’t offer to pay for, Ash decides he needs to go back to where it all started —Evil Dead‘s original cabin the woods. From this point on, Nate Crocker’s script is one quip after another, each one quality and spread equally throughout our three Ghostbeaters. Only Ash Williams could transition so smoothly (?) from a story of his tennis racket stringing friend to a bathroom-quickie proposal, the only currency that’ll do when you can’t front the $22.89. It’s all that much more surprising when you realize episode writer Nate Crocker’s first major IMDB credit, not counting a script production assistant position in 2011, is this episode.

Not to say our cast isn’t carrying their fair share of the load themselves. Ray Santiago and Dana DeLorenzo, through just six episodes, have settled into a fantastic groove that by now should have assuaged any fears over giving Ash “sidekicks.” Santiago’s earnest naivety and DeLorenzo’s brashness with a side of vulnerability give Pablo and Kelly’s relationship a sweetness that makes the fallout from the shotgun-bong fiasco more entertaining than maybe it should be. Plus, Santiago’s delivery of “That makes sense…fuck that demon,” made a throw-away line somehow one of the episode’s funniest.

Once Fisher showed up, and her captain right behind her, and a whole host of evil behind him, the show devolved into one, long, batshit kill-a-palooza. An ice skate was embedded in a skull. A teen boy was impaled on a ceiling fan (“Another member for my fan club.” My God, yes). There were shotguns, chainsaws, decapitations and meat slicers. And in the end, it’s Ash again walking away from a pile of corpses. But now, his backup is large and growing larger still — Fisher has officially signed on to kick Deadite ass, seeing more than enough evidence to conclude Ash is innocent. Well, depending on your definition of innocent.

If you weren’t already on-board for Ash vs. Evil Dead, “The Killer of Killers” might be the point you crank some Styx and push the Dodge Charger pedal to the metal. It’s not subtle, it’s not understated and it’s definitely not “prestige.” But you’re also not going to get “You were in full on bone mode, like a preying mantis” anywhere else on TV.

-The waitress on the receiving end of Ash’s charms just happened to be named Nancy while Bruce Campbell portrays Ronald Reagan over on FX’s Fargo. Has to be a coincidence…right?

–Best one-liner: I already mentioned the fan club line (twice), so runner-up goes to “Good news, I found a pizza pie without blood on it.”

-So what’s up with Ash’s buddy Lem? If his run-in with the “drafter” in the woods is any indication, he’s either dead or Deadite. But I’d expect we should remember the name on the other end of his phone–Crosby–and the armed-to-the-teeth militia Lem joined up with. At the very least, they always be stockpilin’.

-I couldn’t help but notice when the Necronomicon responded to Brujo’s pendant around Pablo’s neck, it opened to a specific page.

Is that the knife Ruby used in the opening of episode three?  That face on the left sure looks mighty burned. 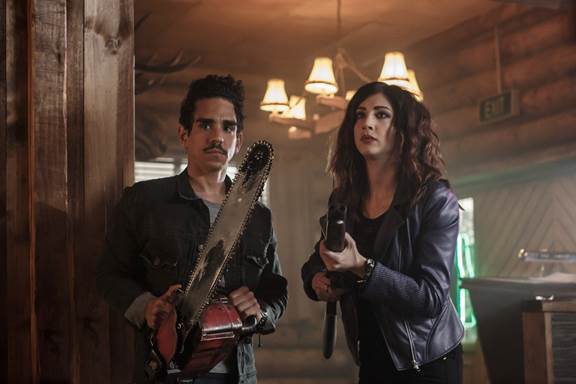