Oh, boy. If you didn’t get the nostalgia-chills from that final shot of the original cabin in the woods, I’d suggest checking the mirror for white eyes, decaying skin or possibly a severed finger or two in your mouth because you might just be dead. Or, you know, you weren’t a huge fan of low budget splatter horror-comedy circa late-80s. Either way, we’re moving right along on Ash vs. Evil Dead, and all roads lead to the beginning.

But first, the our heroes needed to go through some Deadites, a militia of gun nuts and perhaps the most terrifying thing of all–topical subjects.

The Ghostbeaters, now with the increasingly on-board Detective Amanda Fisher in tow, are in the market for some artillery and Ash’s militia connection Lem can provide it. Unfortunately, a possessed Lem is too busy ripping his pals into pieces, and Ash and Co. find the militia’s campground littered with the assembled parts of several second-amendment spouting gun enthusiasts. Things go even further to shit when the militia recognizes Fisher as a cop, because the only thing more frightening than an otherworldly presence of pure evil is guv’ment come to take your weapons. With Pablo and Kelly running from militia, and Fisher and Ash attend to Lem, the question becomes what’s more dangerous, the monsters or the machine guns?

If all this sounds too serious a subject for Ash vs. Evil Dead, rest assured. ‘Fire in the Hole’ is satire, but with a gore-soaked wink at the audience. (and in terms of blood, this episode is certainly up there, despite no teenagers being impaled on ceiling fans). After a sweet sequence that involved Pablo pinning a possessed attacker to a tree with a pickup truck, Kelly fires a machine gun haphazardly into the reanimated body, narrowly missing Pablo in the process. “It’s the gun’s fault!” she yells. “These things are dangerous!”

Even among the bullets and the blood, love seems to be in the air on Ash vs. Evil Dead. It helps Ash sees no problem with spouting pick-up lines at Fisher even as the Deadite-fueled bastardization of a former friend stalks him through the darkness. That’s just “old-school, baby.” And wouldn’t you know it, Fisher seems to come around in the end. It doesn’t hurt that, in the most impressive sequence of this entire episode and possibly the series so far, Ash and Fisher take down Lem in a graceful, handcuffed-together dance. It ends with a pick-axe to the throat, while sparks fly  equally from a signal flare and all that romantic tension.

It’s a shame, really, that the team is coming together so nicely just when it’s time to tear it apart. In something of a nice twist, the day is eventually saved by the gun-toting Fisher, Kelly, and Pablo, with Ash looking on unprepared from the sidelines. “Each of you has a very special place in my heart,” Ash tells them like a proud, one-handed father. “Good job staying alive.”

It’s this newfound warmness, though, which causes Ash to desert his Deadite-slaying companions in the end, headed off to that old cabin in the woods alone. After all, it’s the ones Ash actually loves, the one he genuinely cares for, that he usually ends up having to behead with a shovel.

Although it looks like Ash will be meeting an old friend at the cabin anyway, one with which he used to share an incredibly intimate bond. 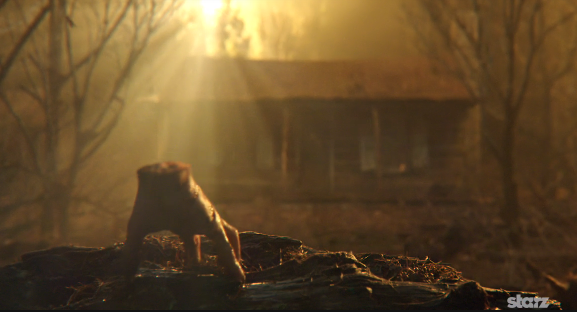 -Although I legitimately felt a disturbance in the Force as thousands of dudes born in the 90s thought they saw Xena Warrior Princess’ bare ass, I’m pretty sure that was a body double rising from the ashes at Brujo’s compound. But it is nice to know for sure Lucy Lawless’s Ruby isn’t out of the fight by a long shot. I mean it’s only natural–that cabin in the woods did used to belong to her family.

–Best one-liner: “Just tuck that attitude into your cleavage, which I have definitely never noticed before.” Is it any wonder Fisher succumbed to Ash’s charms?

-Ray Santiago is so good at making Pablo a character you want to root for, and Dana DeLorenzo is even a little better at making Kelly relatable in horrific situations. There is a chance, however, I’m only saying this because flamethrower is the first thought in my head for pretty much any world-ending, apocalypse scenario, practicality be damned.

-This episode credited three writers, but at no point felt cluttered. And it’s only natural we went back to the series’ beginnings because along with Sean Clements and Dominic Dierkes, Ivan Raimi–brother of Sam and Army of Darkness scribe–had a hand in the script. Pun so very, very intended. 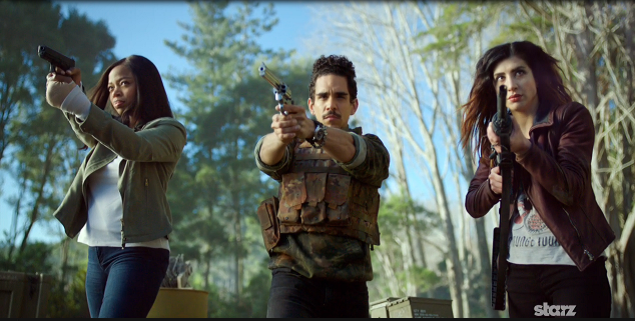