When I spoke to Sam Raimi before Ash vs. Evil Dead‘s season premiere, the director minced no words regarding who he created the Starz series for: “We want to please the hardcore fans shamelessly. If we do, it’s been a tremendous success,” he said. “If we don’t, there’s nowhere to hide, it’s been a miserable failure.”

Last night’s shocking, bloody Ash vs. Evil Dead, “Ashes to Ashes,” proved Mr. Raimi is no liar. The episode, set at Evil Dead 1 and 2‘s cabin in the woods, played like a love letter to diehard Evil Dead fans, a slideshow of the original series’ greatest hits — “Look, there’s the cross on Linda’s grave site! And the cellar door! That’s the psychotic deer head!” The beauty of it all, however, is after a 22-minute nostalgia trip down a gore-stained memory lane, Ash vs. Evil Dead still manages to end with a surprise.

So who do we think made a bigger mistake – Ash for returning to the cabin, or Detective Fisher for developing feelings for Ash? I guess it’s not Fisher’s fault. I assume she doesn’t own a Evil Dead Blu-ray box set, and doesn’t know anyone who gets close to Ash Williams either winds up dead, dismembered, or otherwise horrifically maimed. Case in point: Ash’s very first cabin guest, his girlfriend and fiance-to-be Linda, who caught a bad case of the Deadite, a sickness only a shovel-beheading can cure. Or, as Ash so eloquently put it, “I cut her head off, then she did this crazy dance in the moonlight. I put her head in a vice and cut it off with a chainsaw. She did have a rocking bod, though”

What a fantastic touch it was to have Linda show up here, sans a body, in the same tool shed Ash left her in 28 years ago. I’m not sure what I enjoyed more, the sheer crudeness of Linda’s taunts (“I give good head”), or how well set up her appearance was. In fact, everything about the buildup in “Ashes to Ashes” felt unique. It wasn’t quite the in-your-face balls to the wall splatter of the previous episodes; it was genuine slow-build horror, the tension so tight that the small, disturbing visuals–like Ash’s severed hand inching through the walls, pausing only to sprout an eyeball–held that much more weight.

Of course, who better to disrupt the quiet tension but not one Ash Williams, but two? Continuing the trend of alluding to but not directly referencing Army of Darkness, an evil Ash doppelganger, spawned from the infamous severed hand, arrives on the scene. “Maybe I grew another hand,” the Evil Ash says. “Or the hand grew another me. What’s the difference, Amanda?”

The difference, it turns out, results in Amanda Fisher’s death by meat cleaver-deer antler combo. In something of a twist, Fisher’s death–and I know how strange this sounds–is the first on Ash vs. Evil Dead that didn’t seem “fun.” Yes, it included an amazing one-liner (“Now that’s what I call cleavage”) and used just as many, if not more gallons of fake blood as a number of death scenes in the past. But Fisher’s death was more than just a Deadite doing what Deadites do. She just signed up for this, just realized Ash wasn’t the enemy. And on the other end Ash, after all these years, really does deserve a normal partner and a retirement to Jacksonville, Florida, or really anywhere evil doesn’t want to murder his loved ones (so maybe not Jacksonville).

With that said…I can’t say I’m too upset to see Fisher go. With Pablo and Kelly consistently becoming fully-fleshed characters and worthy successors to the Evil Dead name, Fisher never quite clicked. She worked far better as the only person not buying Ash’s bullshit, a character trait the show dropped too quickly and with zero grace. Even without Ash, Fisher fell into a narrative habit where the character played horrific situations way too cool, a calmness which never felt earned. Some of this is on how Jill Marie Jones played her, some of it is on Ash vs. Evil Dead‘s 30-minute time-frame, and some of it is on the charisma tornado cooked up by the combined efforts of Bruce Campbell, Lucy Lawless, Ray Santiago and Dana DeLorenzo which would suck up most other characters, regardless of who they are. 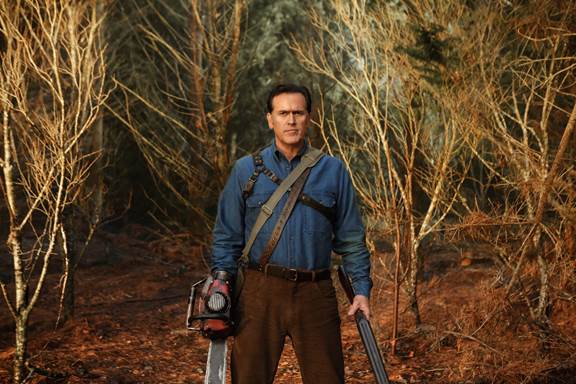