A Deadite-possessed Amanda Fisher stuck her fists through two hikers’ skulls and used them as puppets. Boom. End of recap. Amazing. Bravo.

Unfortunately, contractual obligations mandate I must review at least some of Ash vs. Evil Dead‘s penultimate episode not involving corpse-puppets. Again, unfortunately, there isn’t much else to review. I’ve said all along the one major gripe against Sam Raimi’s twisted Evil Dead TV adaptation is its half-hour format, and its tendency to pull you from the action the moment said action gets going. ‘Bound in the Flesh,’ touted as the long awaited showdown between Bruce Campbell’s Ash Williams and Lucy Lawless’ Ruby Knowby, seemed particularly set on killing time, even when that time is so precious.

But still, did you see Fisher use those hikers as puppets? God, that was great. Even the most uneventful half-hour of Ash vs. Evil Dead uses its most blood-splattered visuals to play the viewer like a…well like a puppet.

Now, none of this is to say it isn’t a thrill to see Campbell and Lawless, two walking balls of charisma made human, trading one-liners and barbs back and forth like a tennis match played with chainsaws and daggers. “What have you accomplished in all these years?” Ruby sneers at Ash. “You put a chainsaw on your stump?”

She has a point, true, but that chainsaw played part in this episode’s second most entertaining set piece of the evening — Ash dutifully chopping up the body of his doppelganger to the tune of Bill Withers’ ‘Just the Two of Us.’ I was a little disappointed, though, that all that genuine emotional weight garnered from Fisher’s death last week was lost here by Ash, well, not really caring that much Fisher was dead. No, I didn’t expect one Ash Williams, master of the bathroom quickie, to suddenly become a romantic. But pretty much any change in Ash’s character seen in Ash vs. Evil Dead‘s first eight episode went out the window as soon as he said “I promise to respect your modesty as I cut you into small pieces…okay maybe one more peek.”

But as long as we’re discussing changes in character, I must admit I like Fisher 100 times more as a Deadite than I ever did when she was alive. Even without the aforementioned puppet show–which, again, was amazing–Deadite-Fisher gave ‘Bound in Blood’ all of its most chilling moments. “Before you die,” she screams in the face of newcomer Heather, “I want you to know there is no Heaven.”

Yeesh, dark stuff even from the puppet master her/itself.

What are we to make of Heather, after all is said and done? She’s the only hiker to make it out of this ordeal with her brains fully inside her skull, and she seemed to be crushing hard on Pablo until a demon had to go and launch her into a tree. If history has taught us anything, pretty blondes in this universe usually meet the wrong end of a sharp object, especially out in the woods. But Ash vs. Evil Dead seems hell-bent on expanding the Evil Dead’s cast of important characters past “just Ash Williams,” and surviving at least one episode on this show gives a character a better track record than most. Despite the broken bone sticking out her leg Heather seems safe, for now, firmly entrenched at least as the wedge between Pablo and Kelly.

Finally, the third impressive practical effect-driven piece–the Necronomicon itself. I really enjoy how Ash vs. Evil Dead worked to make the book of the dead a character in its own right, just as much a partner to Ash as any of the Ghostbeaters. After all, who else has been there for the last 30 years? “I’m what makes you special,” the book whispers to Ash, and you can’t help but wonder if it has a point. Of course, seducing the weak-minded is kind of what the book does, so what does that say about me?

And what does that final line say about Ruby? “I wrote this book.” I mean, of course Ruby didn’t have noble intentions in forcing Ash to turn over the Necronomicon, but it’s not really about what Ruby wants. It’s more about what the hell Ruby even is? One has to assume she’s connected to, if not a member of The Dark Ones mentioned all the way back in episode three, but we basically have no idea what they are, either. Is she actually a Knowby? Did Professor Raymond Knowby actually stumble onto something he didn’t understand in the original Evil Dead film? Or was his entire family more entrenched in the dangers of the Necronomicon than was hinted at on that fateful cassette tape?

No matter what we have one more episode, one more half-hour, in Ash vs. Evil Dead‘s first season to get some answers. All aboard the night train to Killadelphia.

-Kind of disappointing that Ash’s evil twin was dispatched so quickly this week, but the solution as to which Ash was real–“I’m racist, but NOT against Asians”–was just offensive and absurd enough to be classic Ash Williams.

–Best one-liner:  “I’m gonna bury it in the basement, so I can finally say to evil, ‘Hey evil, eat my butt.'” Yeah say what you will about my maturity level, I still think Bruce Campbell saying “Eat my butt” deserves its own Emmy category.

-I’m…not sure I understand what happened between Ruby and Fisher, moments before Fisher died. Fisher manages to say “We can still be together, if you want,” to which Ruby replies “I’d like that. But our time has not yet come.” Who was talking to Ruby, the dying Fisher or the demon insider her?

-After two or three episodes of being far, far left of the main action, I’m happy to see Pablo and Kelly re-entering the fray, even if it means the cover of the Necronomicon attacjing itself to Pablo’s face, The Mask-style. 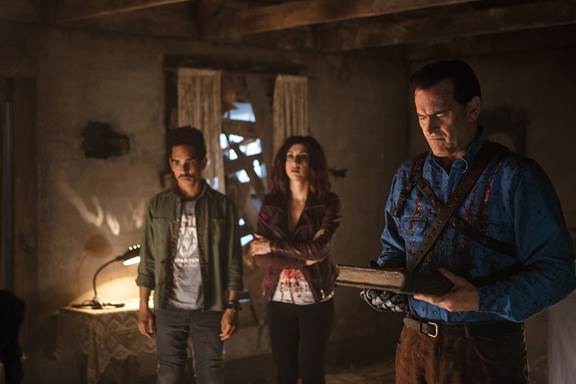