In light of the Occupy Movement, which rose quickly from the economic recession only to dissipate in organization and focus, Ben & Jerry’s co-founder, Ben Cohen, established a nonprofit to remove money from politics.

“No matter what issue you are most passionate about—environment, healthcare, soaring prescription drug costs—the root cause is always linked to corporations giving so-called donations in large sums to politicians, in a process Senator John McCain has called ‘legalized bribery,’” Mr. Cohen said in a phone interview with the Observer. Mr. Cohen founded Stamp Stampede, marking U.S. currency with slogans such as “NOT TO BE USED FOR BRIBING POLITICIANS,” and “STAMP MONEY OUT OF POLITICS.” Inspired by other successful currency-stamping movements utilizing the viral nature of money—like WheresGeorge.com—Mr. Cohen wants to involve those who wouldn’t necessarily go to a public park (like the Occupy Movement) to protest.

‘Our representatives get gobs of money from corporations for either passing or not passing legislation, essentially transforming our democracy into an oligarchy.’

Since the Citizens United ruling in 2010 stipulated spending on political campaigns could not be regulated, both Republicans and Democrats have demonstrated broad support for campaign finance reform. A New York Times/CBS poll in May found 84 percent of Americans believe the role of money is too influential in political campaigns. A recent analysis by the Brennan Center for Justice found outside spending from groups who operate independently from political candidates, such as super PACs, has double since the ruling.

“A few hundred really wealthy people put in the majority of early contributions to our country’s presidential candidates,” said Mr. Cohen. “In the context of congress, our representatives get gobs of money from corporations through lobbyists for either passing or not passing legislation, essentially transforming our democracy into an oligarchy. We can’t tackle the rest of the problems until we tackle this basic one. It’s difficult to address because it requires an amendment to overturn a Supreme Court decision, but that’s what Americans have done throughout history—we have worked to overturn egregious decisions, which is why we have the constitutional amendment process.”

Mr. Cohen says some legislation has gained ground, but the underlying problems remain, and strong support for anti-establishment candidates like Mr. Sanders, Donald Trump and Ben Carson attest to the level of disenchantment across the country. But money still plays a significant role in politics—from local levels to the presidential primaries—and the ones who see success in the polls find creative ways to spend the donations they receive.

Candidates benefitting from a corrupt campaign finance system are the least inclined to petition for change.

Senator Ted Cruz, a presidential candidate with strong financial support from super PACs, has attributed his recent boost in the polls to using donations to strategically profile and target potential supporters. Mr. Cruz’s campaign hired Cambridge Analytica, a Massachusetts-based behavioral research company owned by Robert Mercer (who has donated millions to a Cruz super PAC), to develop psychographic models of households in key primary states such as Iowa, in part through collecting Facebook data. The strategy is paying off. Mr. Cruz—once viewed as too extreme and abrasive towards the rest of the Republican Party—has overtaken Mr. Trump for the lead in Iowa.

Candidates benefitting from a corrupt campaign finance system are the least inclined to petition for change—given the amount of money they have on the line, it is difficult to inspire them to push for reform. Instead, finding a solution is dependent on grassroots efforts to urge politicians to talk about campaign finance reform and to live up to these expectations in remedying policies that undermine democracy by breeding corruption.

“The big problem is most people want to change it, but they think it’s not changeable. As those people see more and more stamped bills and more people talking about it, their lethargic opinions might begin to change about whether we can get our democracy back,” said Mr. Cohen. “If we don’t deal with this issue, we might as well hand over the keys to the corporations and ultra-wealthy and admit that we are just going to be their pawns.” 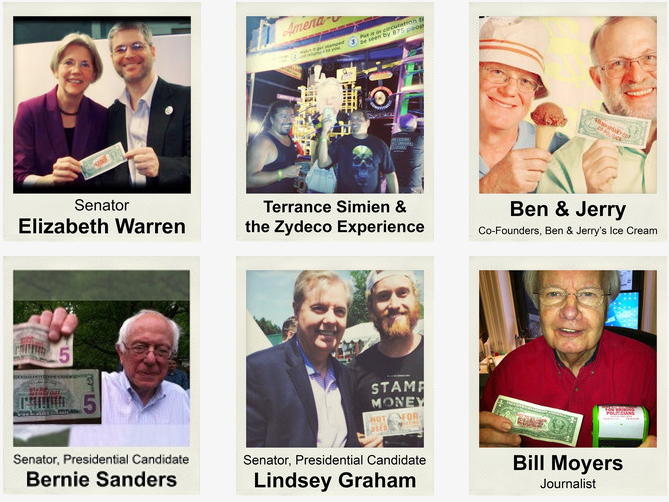