In one of the wisest and most profound farewell addresses in the history of the American presidency Dwight Eisenhower warned the nation of the dangers of a military-industrial complex.

In his farewell address during the Cold War era President Eisenhower was warning of the danger of military establishments in the United States and the then-Soviet Union seizing total control of the political process and driving the world towards nuclear war.

Somewhere in heaven Mr. Eisenhower must be looking down to earth and observing American politics and thinking: “My fellow Americans, don’t say I didn’t warn you.”

America today faces a grave and imminent danger of becoming an oligarchy ruled by a handful of individuals possessing and wielding vast sums of money to seize control of an interlocking directorate of American politics, American business and American media in ways that have nothing in common with the democratic dream envisioned by Washington, Jefferson, Madison and Adams.

What is most striking, fascinating and profound about the Bernie Sanders campaign—and the workers and small donors who are rallying to his cause—is the degree that he, and they, are battling against the oligopolization of America across the landscape of American politics and the American economy.

The lead story in The New York Times is titled: “For the Wealthiest, a Private Tax System That Saves Them Billions.” Mr. Sanders could not have said it better.

Americans are being frozen out of a college education entirely because they cannot afford the costs that have continued to balloon day after day, year after year, decade after decade and generation after generation.

When Mr. Sanders calls for increasing taxes on the wealthiest Americans and closing the loopholes that allow many of the largest American corporations and wealthy Americans to avoid paying their fair share of taxes, he is battling against a financial-industrial complex in which money is spent to buy legislation that creates tax laws and to hire lawyers to make the most of the loopholes that their money has purchased.

When President Obama was pushing his healthcare reform law that has come to be called Obamacare, I joined Mr. Sanders, Sen. Elizabeth Warren, and other progressives championing a more enlightened version of healthcare reform that would have included a public option and other reforms that Mr. Obama claimed (untruthfully) that he, too, supported.

Remember, Obamacare was passed at a time when Democrats controlled the presidency and large majorities in the House and Senate.

So why were the stronger reforms that Mr. Obama and most Democrats claimed to support defeated?

The answer lies in a medical-industrial complex that includes big insurers, big drug companies, and major hospitals whose lobbyists directed big amounts of campaign donations in return for stripping out of the legislation the most powerful reforms that were defeated even under a Democratic president who governed at the time with large Democratic majorities in the House and Senate.

When Mr. Sanders calls for a Medical for All healthcare system that would maintain high quality health care at a far lower cost to consumers he is battling against this medical industrial complex.

The village idiot can figure out that Ms. Clinton’s opposition is not unrelated to the considerable degree that Wall Street firms pour millions of dollars into her campaign and to enhance her personal wealth.

Today American families are being strangled by the high cost of college education, forced into lifetimes of heavy debt burdens, or frozen out of a college education entirely because they cannot afford the costs of college that have continued to balloon day after day, year after year, decade after decade and generation after generation because of an education industrial complex in which highly paid college administrators are allowed to gouge hard-hit students and parents with costs they are unable to afford.

When Mr. Sanders calls for a free college education at public universities he is battling against the education industrial complex that created and continues the status quo. When Mr. Sanders calls for financing his free public college education through a tax on Wall Street transactions that is so small it would barely be noticed by the wealthy Wall Street  players who would be affected, he is battling the financial industrial complex that does notice and aggressively opposes even a tiny contribution to educating the next generation of Americans.

When Mr. Sanders calls for breaking up America’s largest banks and bringing back the Glass Steagall Act, he is launching a revolutionary assault on the heart and soul of the financial industrial complex which has taken almost complete ownership of the Republican Party on financial issues.

Hillary Clinton to her credit has offered some financial reforms but when asked about Glass Steagall she hems, haws, bobs and weaves and ultimately opposes this major policy of financial reform.

Whatever her considerable virtues, the village idiot can figure out that Ms. Clinton’s opposition to restoring Glass Steagall is not unrelated to the considerable degree that Wall Street firms pour millions of dollars into her campaign coffers and pay millions of dollars to enhance her personal wealth through highly paid speeches to leaders of the financial industrial complex.

While American and NATO leaders have difficulty devising an effective policy against terrorism it speaks volumes that 2015 has been a banner year for American arms sales around the world, powerfully enriching defense contractors in a stunning triumph for the military industrial complex that Mr. Sanders battles against.

While the mainstream media pursues an almost child-like obsession with every insult and gaseous emission dished out by Donald Trump there has been a virtual news blackout of Mr. Sanders that is only beginning to be lifted. It is true in part that the reason for the Trump obsession and Sanders blackout is ratings but there is something larger at work as well.

The major network and cable television companies are corporate-owned by behemoths such as Comcast, Disney, Viacom, Time Warner and Rupert Murdoch in what can fairly be described as a media industrial complex that Mr. Sanders continues to battle against.

As voting approaches for the Iowa caucus and New Hampshire primary it is far from clear which side the force will be with.

As I wrote in my last column here, it is entirely possible that Mr. Sanders will win the Iowa caucus, in which case all political hell will break loose and the Sanders movement will reap a gigantic burst of attention as voting turns to the New Hampshire primary, which Mr. Sanders has a strong chance of winning that even the media industrial complex will no longer be able to ignore.

And as New Year arrives and the quarterly campaign finance reports are released by candidates I predict the political and media worlds will be amazed by the amount of money raised from small donors to Mr. Sanders who are the modern equivalent of colonists who battled at Lexington and Concord, as they battle for the America that the founding fathers envisioned against the creeping oligopoly that the founders and President Eisenhower warned against. 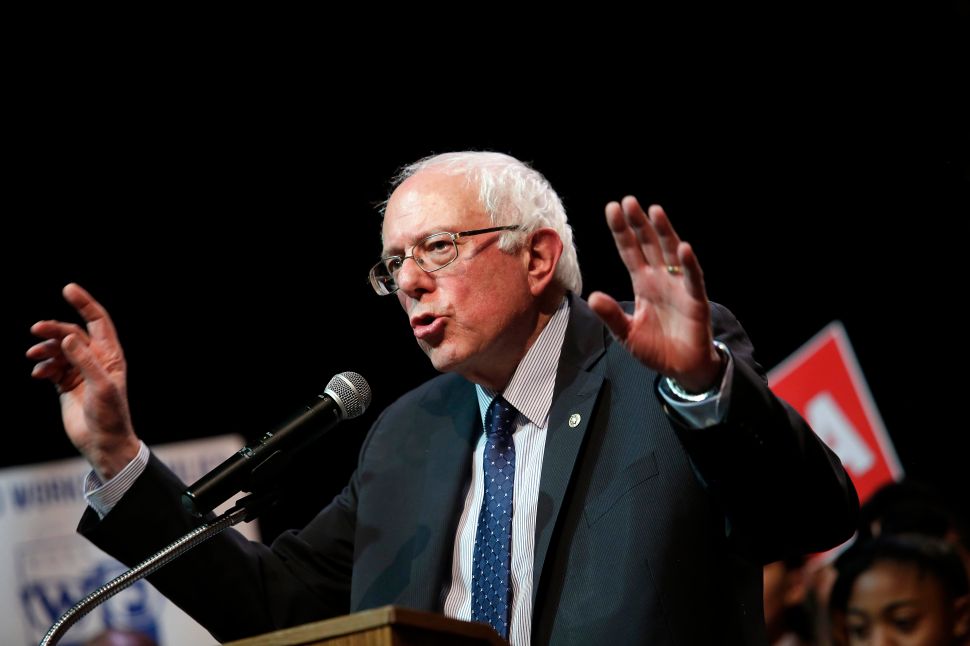