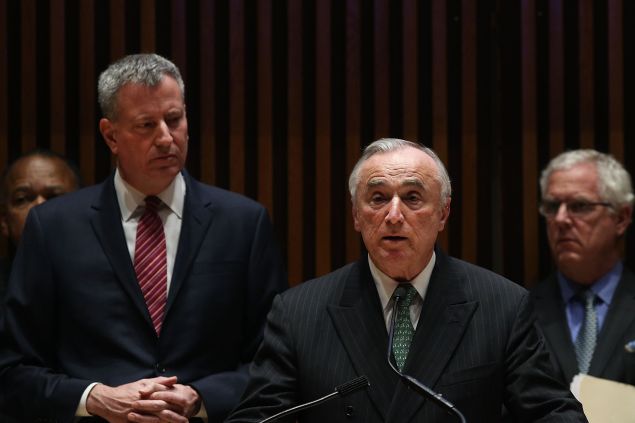 NYPD Commissioner Bill Bratton scoffed at the idea today that he might feel some remorse over having bashed the de Blasio administration’s handling of homelessness—even though Gov. Andrew Cuomo seized on the top cop’s comments to question Mayor Bill de Blasio’s “management” and “intelligence” last week.

Mr. Bratton seemed nettled when asked a question about any regrets he might have about saying last month that the mayor’s team made “a mistake” by not acknowledging and “validating” the visible increase in the street population upon entering City Hall in 2014. Mr. Cuomo and Brooklyn Congressman Hakeem Jeffries, both bitter rivals of Mr. de Blasio in the Democratic Party, cited the comments when attacking the mayor’s “leadership” last week.

“I have no regrets about it. Why should I?” the commissioner told the Observer at an unrelated press conference at One Police Plaza.

The NYPD chief pointed out that, as a mayoral appointee, he is “a very significant part of this administration,” and seemed to suggest he shared in the fault himself. He also quickly pointed out that the indigent population had spiked not just in New York but nationwide, and recalled seeing many people without shelter during his recent visits to Boston, Los Angeles and Chicago.

He highlighted the administration’s efforts to combat the problem by reaching out to people on the street with mental health and substance abuse services, connecting tenants at risk of losing their apartments with legal services and committing to build 15,000 units of housing with on-site social services for the homeless.

“There’s no city in America that does more for the homeless than this city. That’s the reality,” he said. “We’re addressing it and we’ll continue to address it.”

Nonetheless, Mr. Cuomo—citing Mr. de Blasio’s “failure” on the issue—has announced he will unveil his own plan to reduce homelessness in his State of the State address next year.