This week an article in The Daily Beast ruffled feathers by noting that Canada, our placid neighbor to the north, has a large and growing problem with radical Islam. It went so far as to suggest that, despite much Trumpian commotion about a wall facing south, it’s not just the Mexican border that needs watching by American security agencies: the threat from the Great White North may be just as serious.

This claim was met with some skepticism and even derision. Canada? That’s a very nice country that most Americans think kindly of but little about. The notion that Canada—which, frankly, is a tad boring—is the source of any sort of threat to the United States sounds a bit, well, out there to most people.

Except that it happens to be entirely true. If anything, the piece in The Daily Beast, which was light on counterterrorism specifics, low-balled the extent of Islamic radicalism that has taken root in Canada in recent years. Thanks to large-scale immigration, a permissive environment that emphasizes multiculturalism over assimilation and overwhelmed security agencies, Canada now possesses a domestic radicalism threat that Americans need to be talking about.

While this sounds shocking to us, none of it is exactly news to Canadians. Ottawa’s security agencies have repeatedly warned the public since the late 1990s that their country is a haven for dozens of terrorist groups, though they have had difficulty keeping the citizenry’s attention. Over a decade ago, a respected Canadian journalist published a detailed book that explained just how significant a terrorist haven the country had become. Yet matters continue to worsen, and last year a well-regarded Toronto think tank published a research paper titled “Is Canada an Unofficial State Sponsor of Terrorism?”

They are quiet professionals, and behind closed doors they’ve had a good understanding of their domestic radicalism problem for years, but they’re overwhelmed and, as is increasingly the case in the United States, hamstrung by politics. The Canadian Security Intelligence Service, the country’s domestic intelligence agency, has fewer than 3,000 employees, and it has to cover the world’s second-biggest country on everything from terrorism to espionage to immigrant screening. CSIS is competent but far too small to handle its rapidly growing mission set.

Canada has enormous numbers of immigrants, many of them from regions where jihadism flourishes.

Much the same can be said of the Communications Security Establishment Canada, which despite the mundane-sounding name is their National Security Agency, charged with conducting signals intelligence and information security. A close NSA partner for many decades, CSEC is professionally skilled but too small to meet Ottawa’s security needs, as well as restricted by laws that make any domestic operations very difficult. It’s no wonder that, in the terrorism plots disrupted in Canada in recent years, more often than not the intelligence tip-off sparking the roll-up has come from Washington, D.C., not Ottawa.

All this is compounded by the fact that, per capita, Canada has enormous numbers of immigrants, many of them from regions where jihadism flourishes. There are about seven million immigrants living in Canada, and 21 percent of the country was born somewhere else, the highest rate of any G8 country. Since almost two-thirds of immigrants to Canada come from Asia (including the Middle East), it’s no surprise that the country’s Muslim population is skyrocketing. Newcomers are found overwhelmingly in cities; one-quarter of all immigrants head for just one city, Toronto, the country’s biggest, with the result that half of Toronto’s population today is foreign born. That city digested 1.1 million immigrants between 2001 and 2006 alone.

While the overwhelming majority of Muslim newcomers to Canada are no threat to anyone, it’s been evident for years that there are radicals among them and Canadian security agencies have a tough time tracking them effectively. The good news, at least for Canada, is that incidents of domestic jihadist terrorism have been rare.

Although the October 2014 shootings on Parliament Hill in Ottawa, which killed a Canadian soldier, got the world’s attention, the Muslim shooter was mentally unbalanced and did not have ties with any known terrorist groups. Better organized was the jihadist gang arrested in 2006, the so-called Toronto 18, made up of angry Muslims bent on murder and mayhem at home. The hate-filled wannabes, mostly immigrants, planned to kill hundreds of Canadians but they were stopped well short of execution. They were inspired, but not directed, by Al Qaeda.

For Al Qaeda and the Islamic State, Canada is especially attractive because it’s so close to the United States.

It’s long been evident to Western security services that professional jihadists view Canada as a safe staging base for operations elsewhere, a place to raise funds and organize plots to be executed outside Canada. Hence terrorism conducted in that country is considered “off message” and counterproductive, which explains the dearth of mass-casualty jihadist terrorism in Canada, despite the large numbers of radicals there.

For Al Qaeda and the Islamic State, Canada is especially attractive because it’s so close to the United States. Jihadists are well aware that Canada takes in large numbers of refugees, and Ottawa’s benefits are generous. Moreover, newcomers can get a coveted Canadian passport rather quickly, which enables easy travel all over the world. With a Canadian passport in hand, access to America is no problem, since U.S. border enforcement isn’t eager to detain Canadians without reasonable cause, since we don’t want Canadian authorities doing the same to Americans.

None of this is new. CSIS is supposed to screen refugees for security issues but, as everywhere, that task is exceptionally difficult, no matter what politicians tell you. The warning shot that wasn’t seriously heeded was Al Qaeda’s Millennium Plot at the end of 1999. This involved Algerian jihadists based in Montreal, and controlled out of Bosnia, that aimed to blow up Los Angeles International Airport.

It’s a numbers game, and nobody really knows how many terrorists are lurking in Canada.

As I detailed in my book Unholy Terror, LAX and hundreds of lives were saved through the diligence of a single, low-ranking U.S. customs inspector who stopped Ahmed Ressam at the border—it was a well-timed hunch, no more. Mr. Ressam and his fellow refugee-terrorists were living in Montreal, collecting welfare and committing crimes to fund their jihadism. They were in Canada legally, since they claimed they would be tortured if they were returned to Algeria. Which was true—they merely neglected to mention to Canadian refugee screeners that they would be tortured in Algeria because the security services there knew Mr. Ressam and his friends were Al Qaeda-linked terrorists.

CSIS failed, and they have doubtless failed many times since. It’s a numbers game, and nobody really knows how many terrorists are lurking in Canada. Politics is a big part of the problem. In addition to the generic political correctness that infects many Western countries regarding jihadism, Canada’s particular problem is that one of their big political parties has actively kept Canadian spies and cops away from known radicals for decades.

The Liberal Party has long viewed immigrants as a core part of their constituency. A classic case is that of the Liberation Tigers of Tamil Eelam, one of the world’s nastiest terror groups, which waged a brutal quarter-century struggle—the LTTE is infamous among terrorism gurus as the pioneers of suicide bombing—in no small part from Canada, which émigré Tamils used as a staging base for operations in their homeland. Liberals viewed the country’s 300,000 Tamil immigrants as potential voters, and turned a blind eye to repeated warnings from CSIS that the Tigers were conducting terrorism from Canadian safe havens.

The word “terrorism” did not even appear in the Canadian criminal code until after 9/11.

Leading Liberal politicians regularly appeared at Tamil events that were raising funds for the LTTE, and party leader Paul Martin, who was Canada’s prime minister from 2003 to 2006, was unapologetic about his showing up at LTTE fundraisers, despite CSIS warnings that this was collecting money for terrorism.

The word “terrorism” did not even appear in the Canadian criminal code until after 9/11, which forced Ottawa to start getting somewhat serious about the problem. Just how bad things got under the Liberals, who ruled in Ottawa from 1993 to 2006, is evidenced by CSIS figures. A decade ago, according their numbers, which counted as terrorists those who were members of recognized terrorist groups or those involved in witting fundraising for them, there were 10,000 terrorists in the Toronto area alone, according to CSIS.

Conservatives coming to power in Ottawa in 2006 helped, and new laws assisted the fight against terror. The LTTE finally was added to the official list of terrorist groups, which dried up much of their fundraising in Canada. But most of those 10,000 terrorists in the Toronto area are still there, an hour’s drive from the American border, and it’s a safe bet most of them hold Canadian passports.

Worse, the Liberals have just returned to power in Ottawa, and Justin Trudeau, the country’s youthful new prime minister, has gone out of his way to court Muslim votes. Mr. Trudeau has often castigated alleged discrimination against Canadian Muslims, which he used to good effect in recent elections. His early actions in power, including pulling Canadian fighter-bombers out of the U.S.-led air campaign against the Islamic State, do not inspire confidence that he grasps the seriousness of the situation.

This, after all, is the politician who back in 2011 expressed his strong public disagreement with a Canadian government brochure aimed at immigrants that described honor killings as “barbaric.” That Mr. Trudeau does not take jihadism seriously is a view expressed by security professionals on both sides of the border. “We were underwater on the domestic terrorist threat even before this government,” explained a senior Canadian security official to me, “and now it’s certain to get worse. We’re already feeling pressure to back off from 24 Sussex,” a reference to the prime minister’s Ottawa residence.

Although CSIS only months ago expressed public concerns about a “sharp increase” in the number of Canadians going abroad to wage jihad, that seems to have changed now that Mr. Trudeau is in charge. Only weeks after the Liberals took over, accusations have appeared that CSIS is low-balling the numbers of jihadists in the country to make the new government look good.

The alarming reality is that nobody really knows how many jihadists are north of our border, much less how many of them possess Canadian passports. All that can be said for certain is that if Canada’s new Liberal government gets in bed with radical Muslims like its predecessors did with radical Tamils, on grounds of political expediency, the terrorist threat to North America will rise quickly. The time to talk seriously about mitigating that risk is now. 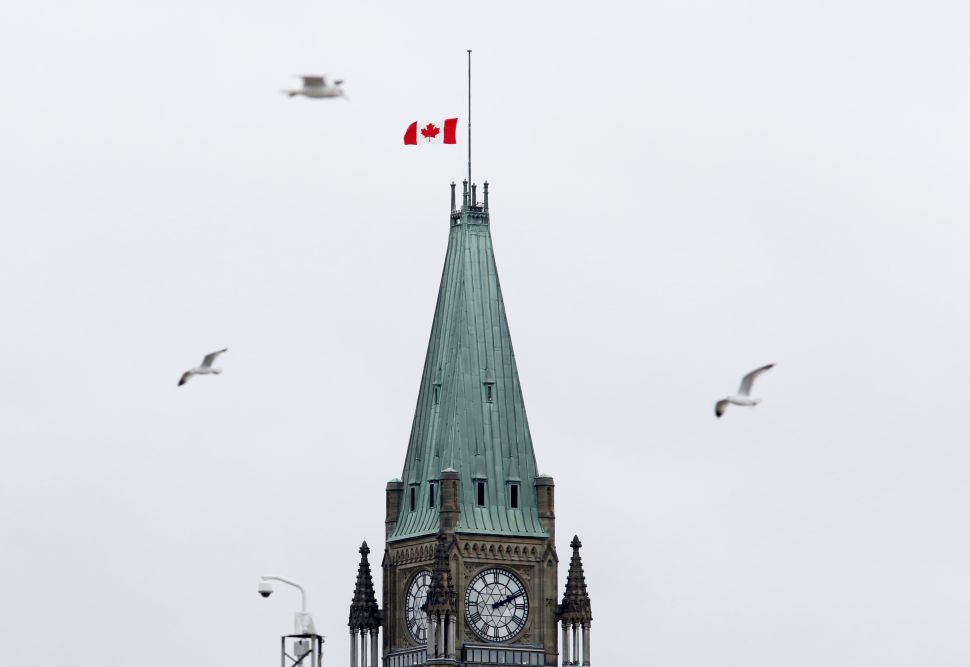