Star Wars: The Force Awakens finally opened last night, riding a wave of great reviews and fan expectations. Promotions for the film have included everything from a new Star Wars rap to a series of Google Easter eggs.

But the film’s best promoter may just be a dog named Gary.

Gary, a French bulldog who belongs to Carrie Fisher (aka princess-turned-general Leia), has accompanied his owner to just about every press junket for The Force Awakens, including the film’s premiere.

The cute canine seems delightfully unfazed by the attention being given both to him and to Ms. Fisher—he barely blinked when being cooed at by hosts on Good Morning America and Live! with Kelly and Michael.

Like any good modern celebrity, Gary has capitalized on his Internet fame by starting a Twitter account, where he (or at least his human handlers) comments on life as a dog and a Star Wars celebrity:

What has been the best part of Star Wars coming back?

It's hard texting when all you got is paws

Mommy @Gary_TheDog hasn't aged any in my eyes. She is still as beautiful (even more when she has bacon strips) pic.twitter.com/1yfpwL1rZF

lol good try @genesimmons but you ain't no Gary pic.twitter.com/90N5xqK5KX

Who let the dogs out? @carrieffisher did

Hey, Yoda! Come over and let's do it on the paper. You are a dog right?

Hey @carrieffisher did you know Christmas was coming and I need a new chew toy? I'm just sayin pic.twitter.com/SB5CdyjAnz

May the Force be with you, Gary. Thanks for the laughs. 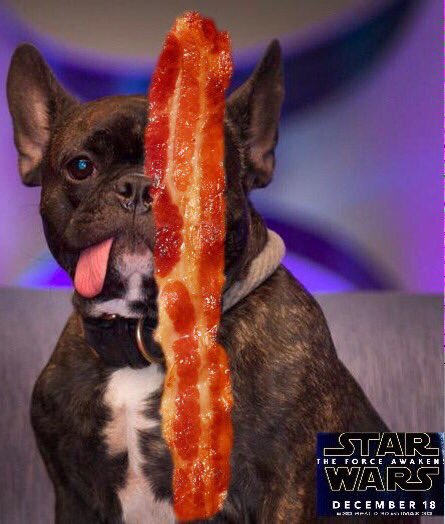