For the last decade or so, the holy trinity of Republican hate has been as predictable as a GOP vote against Obamacare.

There was Nancy Pelosi, the former House speaker, and Harry Reid, the former Senate majority leader. There was, of course, President Barack Obama, avatar of all the American right loves to loathe. (If you want to turn the trinity into a square, throw in Hillary Clinton for good measure.)

But the trinity—or square—appears to have inducted a brand-new member: Charles Schumer.

Mr. Schumer, the ubiquitous senator from New York, has lately been on the tongues of the Republican presidential candidates almost as much as Mr. Obama and Ms. Clinton, the Democratic front-runner for the White House. Three candidates in the televised debate Tuesday night tried to tie the veteran Democrat, who is in line to lead the Senate Democrats after the 2016 elections, to their rivals, lending additional airtime to a name that has had more than enough exposure over the years.

Sen. Ted Cruz of Texas, a hard-line conservative, seemed to delight in bringing up Mr. Schumer the most, ripping into his top rival, Sen. Marco Rubio of Florida, for working with the New York senator and other Democrats on an immigration reform bill in 2013. Mr. Rubio, sensing the Republican electorate’s dissatisfaction with granting undocumented immigrants a path to citizenship, eventually backed away from the effort.

“There was a battle over amnesty, and some chose, like Senator Rubio, to stand with Barack Obama and Chuck Schumer and support a massive amnesty plan,” Mr. Cruz declared. He would repeat the line again in the debate.

Sen. Rand Paul of Kentucky, trying to gain traction against his top tier rivals, took a similar approach. “[Mr. Rubio has] more of an allegiance to Chuck Schumer and the liberals than he does on conservative policy,” he said.

But Mr. Rubio was not to be outdone. Mr. Cruz was just like the New York senator because he “voted along with Chuck Schumer and other groups to weaken our intelligence gathering capabilities,” referring to Mr. Cruz’s support of the USA Freedom Act, which removed the bulk collection of phone metadata by the National Security Administration.

As a well-known press hound with bipartisan bona fides, Mr. Schumer, 65, has endured plenty of jabs from Republicans since he entered Congress in 1981 and led a Democratic takeover of the Senate in 2006. But it hasn’t been until 2015, with Mr. Reid anointing Mr. Schumer as his successor, that the senator has risen to the rarefied stratosphere of Reid or Pelosi, two Democratic leaders who earned the everlasting ire of conservatives when they shepherded the Affordable Care Act into law. Following the ACA’s passage, Mr. Reid of Nevada and Ms. Pelosi of California became the subjects of countless fundraising appeals and Republican takedowns.

Ms. Pelosi in particular, as a San Francisco lawmaker, was the ideal foil: an unabashed liberal from an upscale, unabashedly liberal city. Mr. Schumer, a New Yorker, if not a hero on the left, can play the heel too.

“For a Republican, the added benefit for Schumer is that he’s from New York which is thought to be somewhat of a liberal stronghold and is seen as wealthy and elitist,” said Bruce Haynes, a Republican consultant. “Generally speaking there’s an awareness that one of the most dangerous places in Washington is between Chuck Schumer and the television camera. He’s had a pretty high level of exposure over the years in various leadership positions.”

As Mike Morey, a Democratic consultant and former communications director for Mr. Schumer, pointed out, the New York senator will be a lightning rod for the GOP because of his work on immigration reform, which dates back to his time as an upstart congressman in the 1980s. “The fact is Chuck has been a leader on immigration reform and embracing immigration,” he said. “Cruz and Rubio are trying to ‘out right’ each other, invoke Chuck, because he has rational immigration reform on his mind.”

Any Democrat or Republican occupying a position of power in this polarized era, when voters increasingly hate the other party rather than identify with their own, is due for invective. Still, targeting legislative leaders is not exactly new: Tip O’Neill, the longtime Democratic speaker from Massachusetts, became a stereotype of runaway liberalism, even as he was supposedly sharing his late night drinks with President Ronald Reagan.

“Tip O’Neill was being booted around constantly on the Republican side,” said Larry Sabato, the founder of the Center for Politics at the University of Virginia.

John LeBoutillier, a Republican congressman from Long Island in the early 1980s, once said Mr. O’Neill was “big, fat and out of control—just like the federal government.” The National Republican Congressional Committee mocked Mr. O’Neill frequently, Mr. Sabato recalled.

In other ways, however, Mr. Schumer will make a more curious bogeyman. Some Republicans, at least in the establishment wing, like him, and he has been unafraid to defy his own party on major policy initiatives like the Iran nuclear deal. Mr. Schumer has been dismissive of Obamacare and drawn plenty of outrage from progressives over his long-standing, unwavering relationship with Wall Street. Unlike his more liberal Senate colleagues, he has strenuously avoided ideological fights, hewing to the center when he can.

But the nuances of Mr. Schumer’s positions are likely to be lost in the partisan din, where party affiliation trumps all. When asked how it felt to be the target of so much Republican venom, Mr. Schumer, in a statement, only had a two word reply. 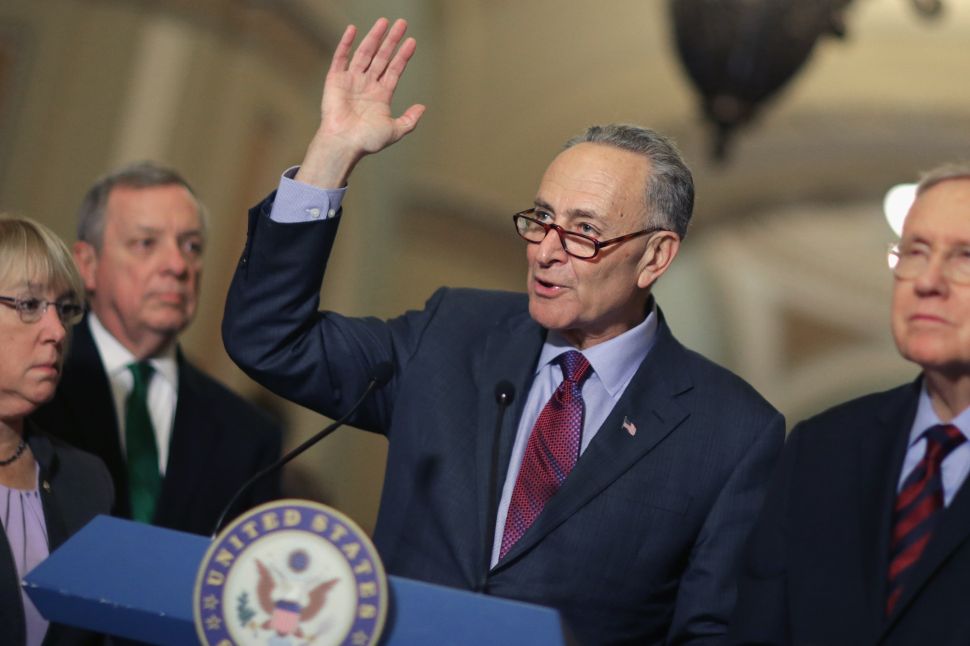