MADISON – Five years after former Governor Jon Corzine unceremoniously left the Trenton State House, he took to the gilded stage of Fairleigh Dickinson’s Silberman College of Business. In 2009, he lost as a Democratic incumbent in a blue state to a Republican challenger—now Governor Chris Christie. He hasn’t been seen in a public appearance since 2011, when he testified before Congress.

“I haven’t had a mic in my hand since I left politics,” said Corzine during his opening statements. His speech—titled “Life with Purpose: Reflections on Success and Failure”—did not focus on his political shortcomings, however. Instead, Corzine offered perspective to student attendees on career goals. He did so not as former governor and U.S. Senator, but as someone with a long and varied career. In addition to the time he spent in New Jersey Politics, Corzine is also a former Goldman Sachs chair.

“My political life was filled with many, many choices and sometimes it was hard to choose what direction to go in,” Corzine said. “In your business life, you have to face many of those same choices. Excellence and integrity must be pursued hand-in-hand.”

His remarks came across as somewhat canned with the clear attempt to inspire the young crowd. Corzine shared thoughts like “giving up is not an option,” “ambition is a good thing” and “you want to love, you want to like what it is what you do.” His long hiatus from the public eye was clear as he failed to break out of the inspirational monologue, though he did draw the occasional chuckle from the audience.

One thing his remarks centered around was risk, and how it should be calculated carefully and often.

“My life has been filled with what I believe has been measured risk,” Corzine said. But, Corzine acknowledged that not all risk, even when measured, guarantees success, alluding to the failed MF Global, a company where he took the helm after his 2010 gubernatorial loss. The company rapidly went bankrupt and Corzine had to testify in front of Congress about the financial losses. He resigned from that position in 2011.

“I hope that someday I can talk about this issue fully,” he said.

When the remarks turned to the question and answer section, Corzine fielded questions from the student attendees on topics as varied as how renewable energy will change the economy and which courses were his favorite when he was in college. He also gave a shout out to state Senator Ray Lesniak, a late arrival.

Corzine has no ties to FDU and received no compensation for his appearance at the school. The event was part of a speaker series at the university where those with corporate experience share life experience and advise with those pursuing careers in business.

For now, it does not seem like the 68-year-old has any plans to reenter the public eye but this appearance does mark, at least, a lack of need to avoid it. 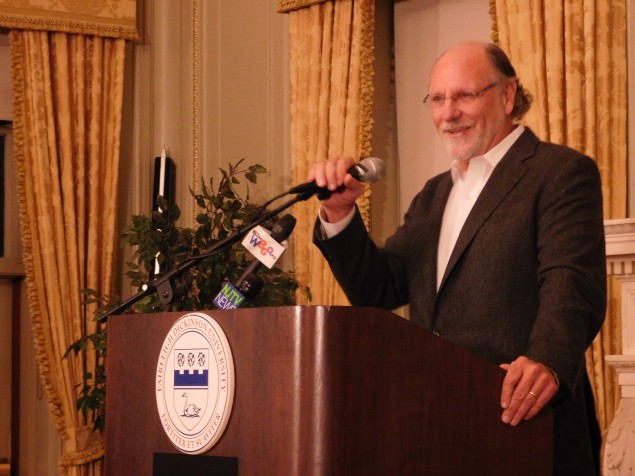