CONTEST ALERT! You guessed it. We’re collaborating with rock icon and muse @courtneylove on an exclusive collection (coming soon)! Win a trip to LA, VIP entry +1 to the launch party with @sophiaamoruso and @courtneylove + $1K Nasty Gal shopping spree! Here’s how: 1) Post a pic on Insta of your fav female musician and tell us how her music inspires you. 2) Hashtag #NastyGalxCourtneyLove & tag @NastyGal. 3) RIOT! (Tap link in our bio for full terms & rules!)

In case you weren’t quite convinced that the ’90s are back and better than ever, Nasty Gal is teaming up with Courtney Love for an upcoming collaboration. While the details are hazy, everyone can prepare for lots of grunge and glamour. The news was announced in a decidedly not ’90s way, via Instagram, with the foreboding “coming soon” to describe the impending rock and roll launch. There’s also a contest to win a trip to Los Angeles along with VIP entry to the launch party and a Nasty Gal shopping spree. Potential winners simply post a picture on Instagram of a favorite female musician with the hashtag#NastyGalxCourtneyLove.

The Nasty Gal brand is known for an obsession with all things ’90s, spotlighting back in the day heartthrobs like Andrew Keegan on their blog and selling looks like this Betsey Johnson babydoll dress that would be equally at home on Cher Horowitz from Clueless as it would be on an LES “it” girl. Nasty Gal’s focus on everything nostalgic includes grunge looks like the flannel shirts Kylie Jenner is always wearing in her Snapchat stories and sheer black lace looks that belong at Coachella. They sell their in-house brand alongside staples like For Love & Lemons and Jeffrey Campbell.

Nasty Gal hasn’t made many major announcements since January, when Sheree Waterson replaced #GirlBoss founder Sophia Amoruso as CEO. Everyone will be waiting to see if Courtney Love and Nasty Gal can both make a triumphant return to the fashion forefront. 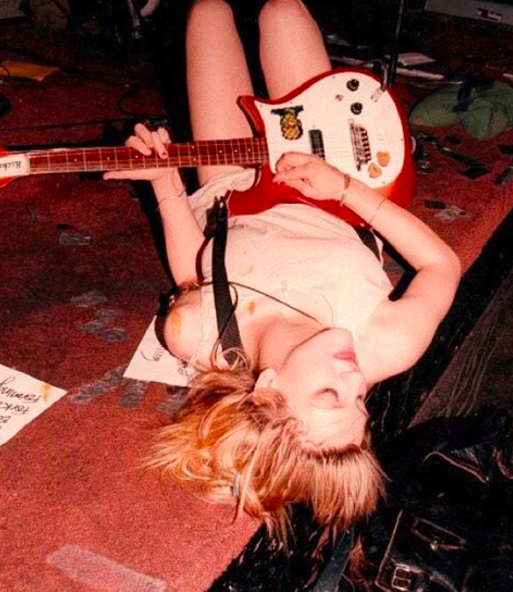