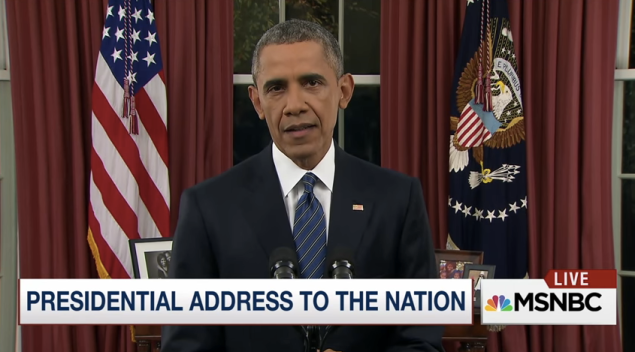 Sunday at 8 p.m. is the weekly sweet spot for television viewing. The parties, dates and outings of the weekend are over. People are home because most must work or resume school on Monday. But it’s too early for bed. Chances are they are indoors with the television on, particularly in the early-darkness nights of December.

Historically, the 8 p.m. hour on Sunday has launched television success. “The Simpsons” seized the first half of it to become the best comedy on television. Decades before, it was the hour in which Americans first met the Beatles on “The Ed Sullivan Show.” Even in the internet age, with TV viewership declining in favor of online pursuits, 8 p.m. on Sunday draws a lot of eyeballs.

So President Obama chose 8 p.m. Sunday night to speak live from the Oval Office in the White House about radical Islamic terrorism. He sought to reassure the nation that the government is doing all it can to prevent carnage such as that which left 14 people dead and 21 wounded by bullets last week in San Bernardino, California.

At the same time, he urged Muslims leaders to oppose radical Islam in their own communities both here and in foreign nations. He said once again that the way to defeat ISIS—the Islamic State, based in Iraq and Syria—is NOT to send thousands of American soldiers to the Middle East, the way President George W. Bush did to Iraq in 2003 with disastrous results.

Mr. Obama urged a ban on gun sales to people on the “no-fly list.” He proposed tightening visa waivers for foreigners coming into the United States. He urged Americans to unite against a common enemy, the ISIS (also known as ISIL) movement, which he compared to cancer and a perverted interpretation of Islam.

‘I really wish the President would say ‘Look, I screwed up, I underestimated the threat, I called them the JV team.”

“We cannot turn against one another,” Mr. Obama said. “They are thugs and killers, part of a cult of death… we are on the right side of history… Freedom is more powerful than fear.”

Reviews of his speech were mixed, according to the instant analysis of pundits and politicians who reacted immediately afterward.

“He announced nothing new on strategy,” Mr. Krauthammer said. “This distraction into gun control is really very cynical… This is a way to change the subject.” He called the President “tone deaf.”

A.B. Stoddard of The Hill said “gun control is an appropriate topic” but not enough “to calm people’s nerves.” Host Bret Baier said most Americans don’t follow the President intently and therefore he reached a broader audience by choosing the day and time for his speech.

Juan Williams of Fox said “I think it was a successful speech” because “when he goes into specifics… you’re talking about a President who is demonstrating some command.” Steve Hayes of The Weekly Standard called the speech “attempts to distract and attempts to defend his failing record.”

Next, Fox featured Senator Marco Rubio, the Republican senator from Florida who is a presidential candidate.

“People are really scared and worried,” Rubio said. “We have a President who is completely overwhelmed… Nothing in the speech tonight is going to assuage peoples’ fears.”

Mr. Rubio said it is absurd for the President to say a coalition is fighting against ISIS and that it is cynical for Mr. Obama to discuss discrimination against all Muslims because no such thing exist.

“I fear, he may have made things worse,” Mr. Rubio said.

On CNN, which tries to project political neutrality, Wolf Blitzer introduced national correspondent John King who said Mr. Obama “doesn’t have a lot of good choices here” and couldn’t dare to say he needed more support from nations in the Middle East, although he does.

White House correspondent Jim Acosta said “This was a war speech, this was a commander-in-chief speech” to reassure the American public.

The harshest voice on CNN was that of author Michael Weiss, an ISIS expert, who said he heard from the President “self-congratulations and cheerleading” that would make ISIS laugh.

“I really wish the President would say ‘Look, I screwed up, I underestimated the threat, I called them the JV team,’” Mr. Weiss said. “I really think his head is in the clouds if he thinks this current strategy is going to succeed… I’d like a little more realism and a little less rah-rah.”

But Van Jones, an ally of Mr. Obama, praised “much more passion” from the President.

On MSNBC, the most liberal of the cable news channels, host Chris Matthews began with Senator Chris Murphy (D-Conn.) who agreed with Mr. Matthews’s contention that Mr. Obama was trying to counter-act militant rhetoric by Republican candidates like Donald Trump and Ted Cruz.

“He said the magic words that people want to hear, that we’re going to defeat these guys,” Mr. Murphy said.

Kristen Welker, the NBC White House correspondent, said Mr. Obama wanted to “reclaim this narrative” which has been overtaken by Republican Presidential candidates and “calm the fears” of American citizens.

“His Democratic supporters will like this speech,” she said. “This is the speech they’ve been wanting him to give…  Republicans will likely argue that he hasn’t gone far enough… He’s been criticized for not being strong enough. ”

But Richard Engel, NBC’s chief foreign correspondent, called Mr. Obama’s words “the same strategy that not been working for the last several years.” And he said the backing of different anti-ISIS groups in Syria “has been a complete debacle.”

On the MSNBC panel, Eugene Robinson of The Washington Post pointed out that Mr. Obama used the “war” metaphor, which he has usually avoided.

Howard Fineman, in a tuxedo, agreed with Mr. Obama’s statement about Islam.

“He said this is a real problem that Muslims must confront without excuse,” Mr. Fineman said.

FOX NEWS SUNDAY: Congressman Michael McCaul (R-Tex), chairman of Homeland Security, said it was a mistake to end the National Security Agency’s meta-data collection program… George Will, reacting to a Page 1 New York Times editorial urging gun safety, sniffed “Some of us think the New York Times editorializes on its front page daily.” When Juan Williams dared to criticize the political power of the National Rifle Association, Brit Hume interrupted and scolded him. “You know what makes them powerful?” Mr. Hume snarled. “The sentiment of the American people.”

FACE THE NATION ON CBS: In a recorded interview with Republican Presidential candidate Donald Trump, host John Dickerson asked if people in America have been too “politically correct” to avoid offending Muslims. “I think so, I think so,” Mr. Trump said. “If you have people coming out of mosques with hatred and with death in their eyes and on their minds, we’re going to have to do something.” Later, Mr. Trump added: “I understand the whole world.” New Jersey Governor Chris Christie, also a Republican candidate, didn’t think much of the call for gun safety. “Typical liberal claptrap from The New York Times,” Jumbo said. . . . The show ended with still pictures of the 14 terrorist victims in California, one dissolving into the next, against a background of candles and flowers. No slow piano music. Only silence. Very classy.

MEET THE PRESS ON NBC: South Carolina Senator Lindsey Graham, another Republican presidential candidate, showed up with a lot of hawk talk and paranoia. “There is a 9-11 attack coming to America,” he told host Chuck Todd. “For God’s sakes, Mr. President, change our strategy.” Right-wing journalist Rich Lowry dismissed blending efforts toward gun safety with the battle against terrorists. “I don’t get this debate at all,” he said. “The idea that we’re going to fight terrorism through gun control is utterly fatuous.”

THIS WEEK ON ABC: Democratic Presidential front-runner Hillary Clinton appeared live with host George Stephanopoulos. On a spit screen, with Donald Trump speaking, Ms. Clinton could be seen laughing at him when he said Mrs. Clinton doesn’t have the strength or the stamina for the fight against terrorism. “Oh, goodness gracious,” Ms. Clinton said. “You’re laughing,” her host said. “I can’t help it,” she replied. “Who can agree with anything he says? If he gets the nomination, I’d be more than happy to campaign against him.” The problem, she said of Mr. Trump’s ideas, “is that sounds like we are declaring war against a religion. That is wrong. It helps to create this clash of civilizations. That is a recruiting tool for ISIS and other jihadists.” Democrat Jennifer Granholm, the former Michigan governor who supports Ms. Clinton, said of Mr. Trump: “He is stoking fear. He is breathing oxygen like a dragon. He uses that fear to divide the country by groups and he uses it to create language that actually empowers our enemies.”

STATE OF THE UNION ON CNN: Host Jake Tapper planned to interview Mr. Trump by telephone at the start of the show but it didn’t go well. Mr. Trump’s voice was hoarse and the phone line kept going dead. Mr. Tapper made no further reference to the aborted conversation but did play a clip of Mr. Trump’s innuendo against President Obama. “There’s something going on with him that we don’t know about,” Mr. Trump said, ominously and, as usual, without specifics. 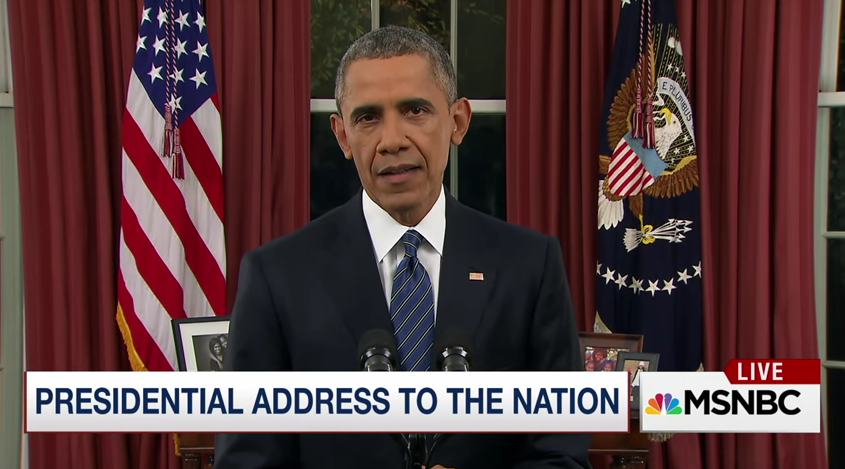