David Mamet’s ghastly China Doll is the worst thing I’ve seen on a professional New York stage since the ill-fated Moose Murders. On the disaster meter, it might be even worse. At least Eve Arden, the eagerly anticipated star, walked out of Moose Murders before the opening night, which also turned out to be the closing night. But as hard as they tried to keep the critics away from China Doll, it finally caught up with the already terminal word of mouth surrounding it. Against warnings, threats and all reasonable offers of sane advice, it didn’t exactly open. It sort of gave in, and the curtain at last rose, revealing a coughing, rasping, mumbling, fumbling and almost completely incomprehensible industrial robot called Al Pacino—or what’s left of him.

Neither he nor the play makes one lick of sense, including the title. There is no doll in sight, or even a map of China. Maybe it is not totally Mr. Pacino’s fault. Despite mountains of rewrites, the play seems unplayable and unfixable, but in an effort to report to you something that resembles a plot, I was forced to peruse this puzzlement in the form of what laughably passes as a finished script. I am sorry to tell you it is also unreadable.

Mind-numbingly hard to believe, even after an avalanche of bad reviews, I am told it is raking in a million dollars a week from Mr. Pacino’s fan base. Because of the star’s marquee value and box office lure, one negative reviewer reluctantly called it a “slam dunk.” That means that no matter how odious the vehicle is, Mr. Pacino’s followers will still show up to guarantee a sold-out house. So it might be a hot ticket (at least until the word on the street kills it), but put your fears aside. After the intermission, there are so many empty seats in the Gerald Schoenfeld Theatre you can sit anywhere you choose. The night I saw China Doll, the entire row in front of me walked out, improving the sight lines but not what was happening onstage.

So what is going on here? I wish I could tell you. There’s this stoned-looking billionaire called Mickey Ross, a bogus king of flim-flam, who has just purchased a custom-made airplane that is parked on a runway in Toronto. He is planning to meet his British fiancée there and proceed to London without paying $5 million in sales taxes. Now the plane has been impounded in a lien against U.S. taxes (even though the plane is in Canada?), and Mickey spends the next two hours abusing, harassing and yelling at his personal assistant, played by a tall, Ivy League beanpole of an actor named Christopher Denham, who deserves a special Tony award for endurance in the line of duty, as well as compensation for laundry bills incurred while wiping off his co-star’s saliva. Mr. Pacino’s sentences come out like a barking pit bull, emphasizing all the wrong words in a non-stop barrage of what sharpshooter Annie Oakley called a contest in “long-distance spittin’.”

Mr. Denham spends two hours pouring drinks, placing calls on a cell phone, and announcing various accountants, governors, politicos, government agents, lawyers, commercial airline reservationists and prosecutors, none of whom are ever explained. Sometimes Mickey stops talking in the middle of a sentence so you won’t hear what he’s talking about, which is annoying, but it doesn’t matter because you don’t know what he’s talking about in the first place. Surely this is a Stanislavski Method mannerism of Mr. Pacino’s own invention, not Mr. Mamet’s. Nobody could be that bad a writer. I’ve seen lousy, inconsequential plays before (some of them by David Mamet), but this thing, abominably directed by Pam Mackinnon on cruise control, is in a class by itself.

Let me give you some evidence. The woman, who is never seen, is referred to by so many different names you lose the thread of whom Mickey is talking about.  Instead of the way real people speak, you get elliptical threads: “There’s a lot of foolish people out there—many of them vote.”  “Do you believe in fate?” “Yes. No. No, I don’t. It’s just that I’ve seen it.” “The governor is bottled . You know what bottled is? It’s .”

And demented exchanges: “The voters. We used to croon to them.”

“What did you croon?”

“What were the savage chants?”

“We called them slogans and promises. Two things you need to win an election: a shitload of money and a magic phrase…”

Huh? Entire sections pass without one word of logic or coherence. There’s a whole speech about whether nutmeg is an aphrodisiac. There is no ending. One character takes out a gun and…never mind. You had to be there. Al Pacino walks like an anchovy and looks like an unmade bunk bed. If they were unemployed, I doubt if either he or Mr. Mamet would shell out their own money to suffer through China Doll. What is it doing on Broadway, and what did we do to deserve it? 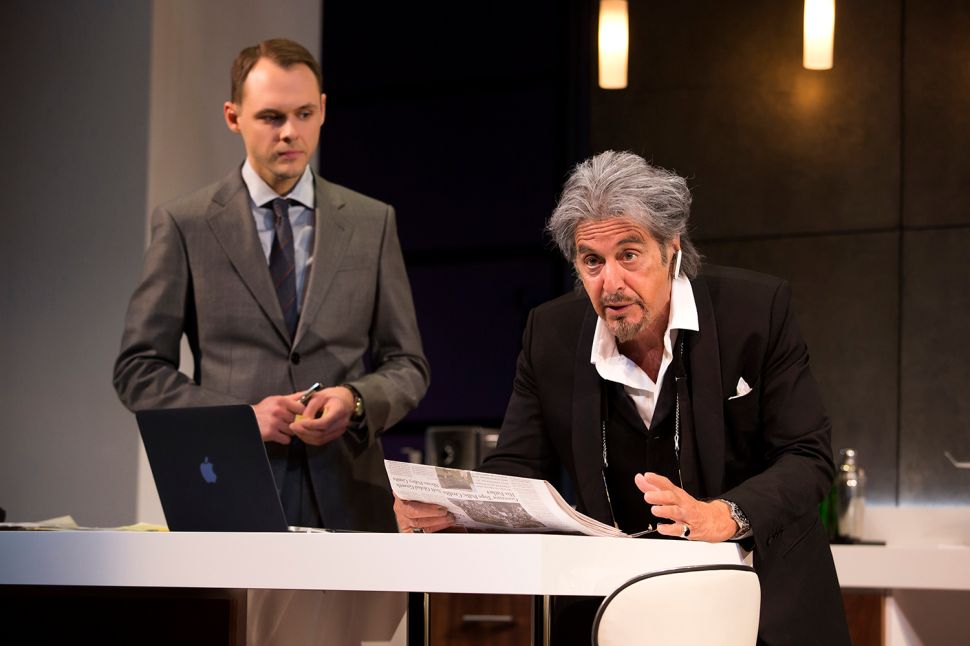