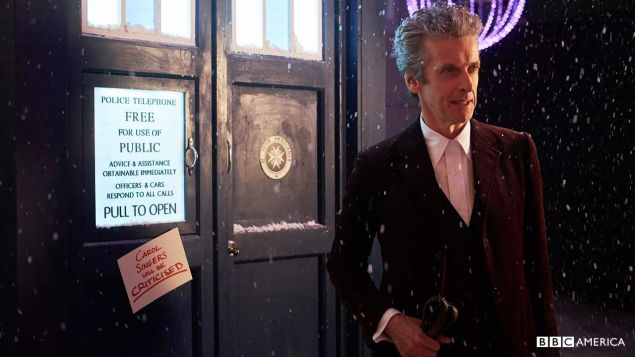 Sometimes Doctor Who Christmas specials go a bit heavy with the Christmas theme. The enemies are Santa robots. Or the main character is a thinly veiled Scrooge. Last year, an actual (if illusory) Santa Claus showed up, complete with reindeer and wisecracking elves.

Not that that’s necessarily a bad thing: I enjoyed all three of those episodes; they all carried the story forward in effective and impactful ways.

But I do enjoy when the Christmas aspect of the seasonal special is a bit lower-key, as in this year’s installment, “The Husbands of River Song.” The episode begins and ends with scenes set during Christmas, but it’s almost coincidental, and has no real effect on the plot. The Doctor shows up wearing holographic antlers, but just for a second. River Song makes her appearance in a red cloak trimmed in white, but then it’s never seen again.

No, this year, instead of giving us a Christmas-themed story, the writers instead decided to give us all a Christmas present: the missing final chapter in the love story of the Doctor and River. After the intensity and complexity of the last few episodes (Clara’s dead! The Doctor is tortured for billions of years! Gallifrey’s back! So’s Clara! Sort of!), it feels like the perfect gift.

Of course, we don’t know that’s what it is at first. The romance comes all wrapped up in a ripping caper storyline. And not without a big heaping helping of misdirection. Which frankly makes it seem at first less like a love story and more like a romantic nightmare.

When River’s associate Nardole finds the Doctor on the remote human outpost of Mendorax Dellora, he’s looking for a doctor. Specifically a surgeon, whom River has hired to remove the head of her new husband, the malevolent cyborg King Hydroflax, in order to steal the object become lodged in his brain, the most valuable diamond in the universe. It’s a small misunderstanding—every time the Doctor says “I’m the Doctor!” River hears only “I’m a doctor.”—and would feel sort of cheap and sitcommy if it didn’t have such devastating results.

Namely, that the Doctor gets to see what River’s like when he’s not around. And it’s not very pretty.

We’ve always known that River was a thief, an opportunist, and somewhat loose with the truth. But I don’t think it had ever occurred to the Doctor that she’d marry someone in order to murder him. Or that she’d turn around and sell her stolen goods to whichever rich genocidal maniac answered her craigslist ad.

Worse than any of that, though, is the notion that she’s been lying to the Doctor all along, using him, the same way she’d been lying to and using Hydroflax. He’s also her husband, after all. And indeed, not knowing she is talking to him, she reveals all sorts of terrible things. She admits that she has often stolen the TARDIS and used it for her own purposes, returning it to the same place and time so that the Doctor never knew. Asked whether she loves him, she replies no, but he’s terribly useful at times.

Perhaps most tellingly, when asked how she got Hydroflax to fall in love with her so quickly, she says that men “will automatically believe any story they’re the hero of.” The look on the Doctor’s face when he hears this is utterly heartbreaking. River’s not only admitting that she’s been using him, she’s telling him exactly why he’s most susceptible to believing her lies.

But then the script is flipped on us. There are a lot of twists and turns in the story: Hydroflax’s head turns out to be detachable, so they take it while he is still alive. But his robot body turns out to have a mind of its own, and it pursues them to the ship where they’re meeting the diamond’s buyer. They trap it in the cargo hold, but then the buyer turns out to be a devotee of Hydroflax, so they can’t show him the head with the diamond in it. And so on.

And at every step of the way, through every reversal, River believes she is basically in control, or that she can regain it. She maintains her breezy, devil-may-care attitude the whole time. Even when the Doctor correctly surmises that she realizes she is probably going to die soon.

It is only when the caper looks like it might threaten the Doctor that she reveals her true feelings. In exchange for sparing his life, the ship’s smarmy concierge promises Hydroflax’s robot body the best possible head to replace that of (the soon to be deceased from acute diamond-in-the-brain) Hydroflax: the head of the last of the Time Lords. Since River is the “known consort” of the Doctor, it should be a simple matter to use her to discover where he is.

But River doesn’t know, and her speech to that effect finally shows us the truth. They can search all they want, because there is no way the Doctor would  find himself in such a pickle with her. He’s off doing his own thing, like always. Her flippant attitude toward him this whole time has been a defense mechanism against feeling alone and abandoned by the one she loves. Loving the Doctor is painful, because she can never bring herself to believe he is capable of loving her back.

Of course, there he actually is, standing right next to her, in the pickle with her after all, and the irony is both delicious and heartbreaking.

This scene would have been enough of a Christmas present. But the episode has something else in store. Because the ship is about get hit by a meteor and crash (that was River’s escape plan), and the planet they’re crashing into is Darillium, home of the Singing Towers. The Doctor knows what that means: In the Library, River’s first appearance (for us) and the last place she was really alive (instead of just a computer simulation and/or a ghostly afterlife self), she told him that their last date was at the Singing Towers. And now here they are.

The Doctor arranges things so that a fancy restaurant is built on the spot where they crash (using the reward for the return of the diamond, natch), and takes her there for a Christmas date. It’s their last, and they both know it, so their conversation is wistful and beautiful. For this last time, they’re in the same place: not one of them at the beginning of their relationship and one at the end, or vice versa, but finally at the same stage, and (nearly) at peace with it. And that’s about as close to happily ever after as people like them will ever get.

A final thought: What was with all of the face/head horror this season? In the premiere we had Colony Sarff, whose face was a mass of snakes. Then we had Rasmussen’s face melting into dust in “Sleep No More,” and an undersea mound of billions of the Doctor’s skull in “Heaven Sent.” And in this episode we had both a cyborg with interchangeable heads and a guy who can peel his face open? It’s almost like Moffat & co. are parodying the interchangeability of the Doctor’s own heads, showing the grotesque side of a man with 13 different faces. Certainly the fact that he was wearing a brand new one (that River had never seen) had some near-grotesque consequences this time around. 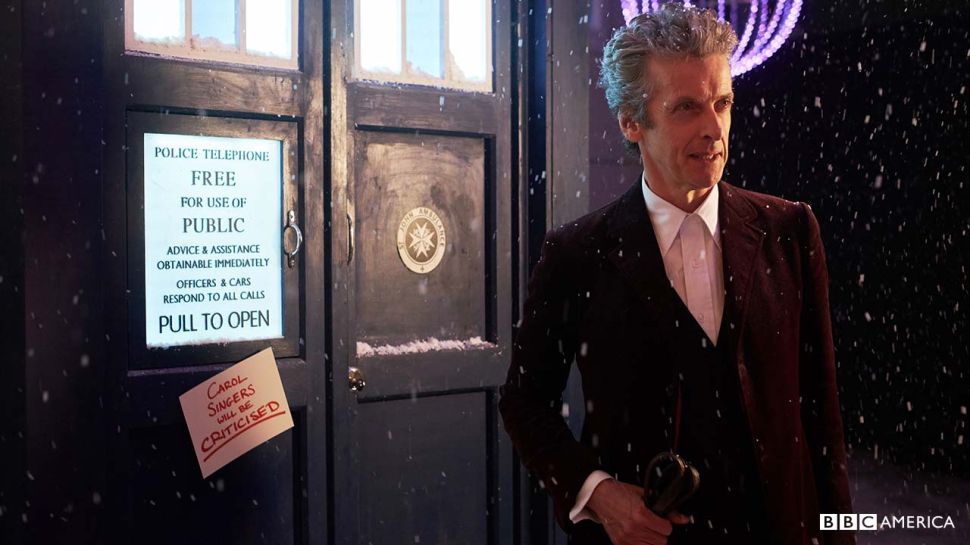