In recent years, curatorial websites like Longreads and Longform have sprouted up to spotlight the vast quantity of essays and reported pieces and other worthwhile stuff being published on the Web. This year, another one joined the fray. The Sunday Long Read, which turned 1 in early December, is a weekly newsletter run by Don Van Natta, Jr., an investigative reporter at ESPN, and Jacob Feldman, a 22-year-old writer for Sports Illustrated.

The newsletter, which currently has about 5,500 subscribers, according to Mr. Van Natta, Jr., differs from other longform newsletters in that it’s a bit more personal—and perhaps meatier. Mr. Van Natta, Jr., and Mr. Feldman both choose their “favorite” read of the week, explaining why it deserves that title in a little paragraph below the link, and then there are 19 other suggestions that could keep a reader occupied for quite some time. There’s also a quote of the week and a lede of the week, among other things.

Mr. Van Natta, Jr., and Mr. Feldman have plans to revamp and expand the newsletter in the new year, though they wouldn’t go into specifics just yet. In a recent telephone conversation, Mr. Van Natta, Jr., who is 51 and lives in Miami, discussed the state of longform (and what that dreaded term even means), how he goes about choosing stories, and what kinds of ledes draw him in.

Tell me how the newsletter came about.

It really came about by accident. I had been tweeting out, maybe as early as 2013, every Saturday or Sunday, my favorite half a dozen or 10 pieces from the week that I liked. I was doing that for about a year or a little over a year, and then late last year, as I explained in the newsletter, a number of friends suggested that I start a newsletter, and a couple of people on Twitter were urging me to do it. Finally, somebody said, you really should do this newsletter, and I said, well, stay tuned, I’m thinking of starting one in early 2015.

When I did that, Jacob Feldman, who was at the time a senior at Harvard—he is now a writer at Sports Illustrated—said he would be happy to help me. And quite frankly, if it weren’t for Jacob, I probably wouldn’t be doing it, because he produces the newsletter. All of the tech-side stuff, which I’m just ridiculously naïve about, Jacob does. So we decided to team up and do it, and it found an audience. We were quite gratified very early on; hundreds of people, and more than a thousand within a month or two, subscribed.

What’s the audience for this kind of thing?

We have a pretty cool audience. We have a lot of writers, editors, you know, at the major magazines, writers who are published by those major magazines, and we have a pretty cool clientele of readers that give us a lot of feedback and give us a lot of suggestions. So in the last few months, I’d say since the fall, it’s almost become crowdsourced in a way; we get a lot of recommendations every week, via email and Twitter, of good pieces which are brought to our attention, which is fun because it’s impossible, obviously, to curate the entire web and the best stuff without help.

I was going to ask you about that. It does seem impossible—and maybe not even worthwhile—to keep up with everything,

It is impossible. It’s totally impossible. It’s hard to read everything, and Jacob and I try to read as much of what we can. I’m a voracious reader, I always have been, and so at night I’m reading stuff that’s pushed to me through Twitter and other social media channels, and anything that I finish and that I really like goes on the list. Jacob’s the same way, and we share the picks. It’s 20 a week, so that’s a lot. It’s really a joint effort: I couldn’t do it without him, and he couldn’t do it without me.

How do you expect a subscriber to the newsletter to consume your picks? Because personally, I get it and I look through it and usually I’ve read some of the things, and then I’m really intrigued by other things, and I could probably spend the rest of the week going through all that stuff, but then there’s other stuff that comes up and I usually just walk around with a lingering sense of guilt that I haven’t read enough.

It’s interesting. The metrics are really encouraging, so my understanding is most newsletters have a 50 to 60 percent open rate, and our newsletter is opened far more than 5,500 times, which tells us that a lot of subscribers go back to it and use it as their weekly reading tip sheet. I’ve had some friends telling me to lower it to 10, which I don’t think we’re going to do—because we want to give as big a cross-section of the best stuff each week so readers can find the stuff they like. But ideally, we want it to be sort of a Sunday mini-newspaper for people. That’s the goal.

What do you look for in a particular story when you’re deciding to put it in the newsletter?

That’s a really good question. If a story hooks me early on, and I read it to the end, then it’s a story that automatically goes on the list. There’s a lot of stories I read that I find almost too formulaic—or they don’t surprise me, or they don’t really intrigue me—that I don’t finish. Maybe I will only get several paragraphs in, and that’s not going on the list. The stories I like are the ones that are surprising. I’m an investigative reporter: I like stories that tell me something new. So if there’s a story with a lot of deep reporting on a subject that I know a fair amount about, but it still tells me something new, then it’s going on the list.

Great narratives are also the kinds of stories I like, and I know Jacob likes them as well. And obviously just exceptional writing—anything that’s well written, even if the reporting is not necessarily top notch, but it’s just written really well. I mean, we’ll put essays on there. In fact, a couple of weeks ago, that “On Pandering” essay just blew me away, and I put it in there. You could argue, well, maybe it’s not journalism, per se, but if it’s great writing and it’s really an intriguing argument, then we’re inclined to put it on there.

We miss stuff. The one thing I did want to tell you is we do miss stuff. And I get friends of mine who tweet me and say, you missed this, this and this, so a lot of stuff does fall through the cracks. But anytime a friend of mine says that, I say, well, that’s your fault, you should have told me about the story!

I also wanted to ask you about ledes, because you single them out in your newsletter. What kind of ledes draw you in?

Ledes that put me there. One of the first rules I learned as a young journalist is that a lede is almost like a camera; you feel like you’re there and you’re looking through a camera. Often the best way that a writer has to do that is with details. Details are so important to a narrative writer, whether in nonfiction or fiction. So most of those ledes I’ve chosen are that way; you’re placed in a particular environment, as if the writer’s camera is looking at something and describing something as it unfolds. That’s so important to great writing, and that’s certainly the kind of writing I try to do as a longform writer myself, so when I see it—and again, there’s a little bit of the envy factor here—that’s usually one we choose to be the lede of the week.

I’m curious what your definition of a long read is. I feel like the word is sort of tossed around carelessly these days, but it doesn’t seem to have a strict definition.

Yeah, you’re right, it doesn’t. It is tossed around, and it’s become a kind of precious term. Probably, if i had to name the newsletter again, I might want to call it “The Sunday Great Read,” because we have had a number of pieces that really aren’t that long—some are three or four thousand words, and we’ve even had a couple 1,500-word stories. The standard for it is less about how long it is than about when you read it, you’re not thinking about how long it is, you’re thinking about how great it is. If it’s something I wish I had written—like I’m jealous of it or envious of it—it goes as my favorite of the week.

As a rule, writers are not always that generous with each other. We can be kind of catty and even a little bit resentful, and I think what’s great about this, and the others sites—like what Bloomberg did today—is it’s kind of cool to salute really great work, and there’s clearly an audience for it. 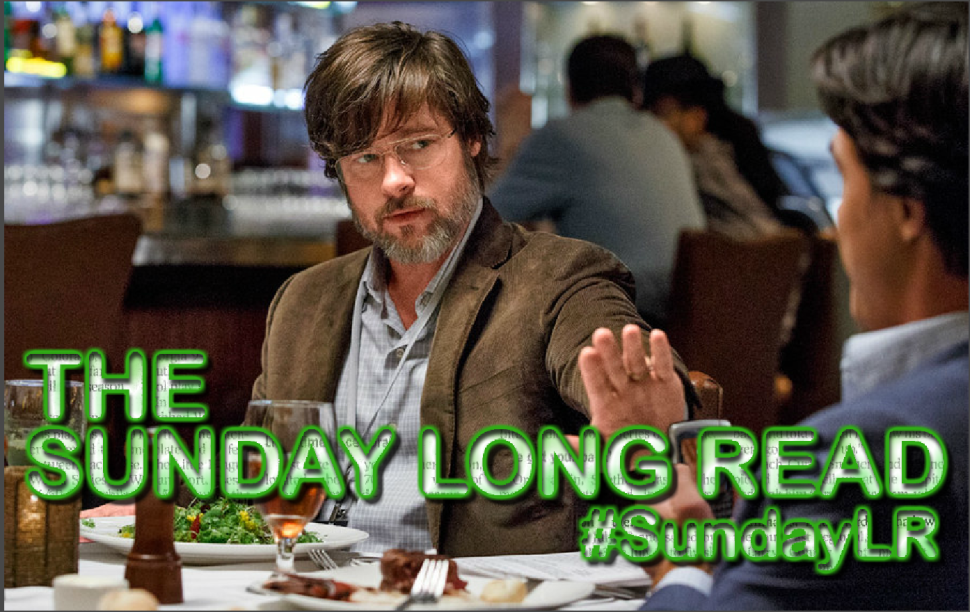