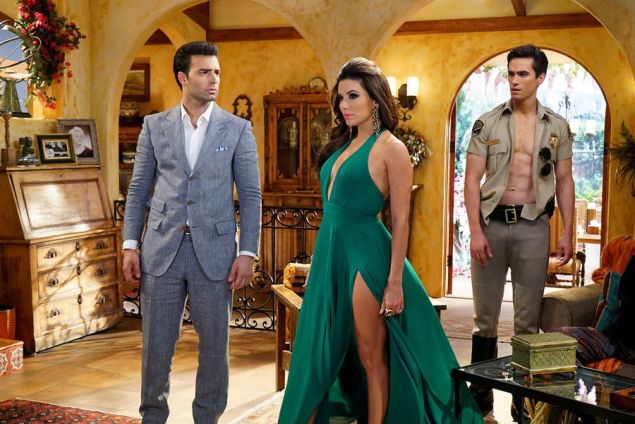 In a world where there is plenty of shirt-ripping, wind machine action, and serious bitch slapping to go around, one might think these soap opera troupes would get old and lose their luster. But, in the right hands, the opposite is actually true.

Here comes Telenovela, created by and starring former Desperate Housewives diva Eva Longoria. The series is a backstage look at a long-running VivaVision soap show lead by star Ana Maria (Longoria), who tries badly to hide – among other things – the fact that she can’t actually speak Spanish. In addition to aging star Isabela (Alex Meneses), the cast includes gay gym rat Gael Garnica (Jose Moreno Brooks), who much to the chagrin of wardrobe supervisor Mia (Diana Maria Riva), rips his shirt open at the slightest provocation, both on camera and off, and Rodrigo (Amaury Nolasco), the hunky villain who constantly has trouble with his fake mustache. Rounding out the ensemble are Xavier (Jencarlos Canela), Ana’s ex-husband and current on-screen lover, and ditzy (or is she?) ingénue, Roxie (Jadyn Douglas).

Let’s face it, soaps are easy targets to make fun of, and so are behind-the-scenes-of-TV comedies, both because they’re already pretty unintentionally hilarious. So how to you make this series funny without making it completely absurd? Without the guidance of this production team, Telenovela might very quickly fall into the category of a low level, one note comedy, but behind-the-scenes of this behind-the-scenes laugher are writers and producers who have been groomed by the likes of comedy creative legends in the making, Bill Lawrence (Scrubs, Cougar Town, Undateable) and Greg Garcia (My Name is Earl, Raising Hope). This work history has given Telenovela Executive Producers Chrissy Pietrosh and Jessica Goldstein, who worked on both Cougar Town and My Name is Earl, the skills to formulate rapid-fire dialogue, hilarious twists and truly unexpected callbacks, all of which make this quickly paced show seriously witty and fun.

Yes, you have to check your reality at the door a bit to get into Telenovela, but that’s what’s expected in all series that riff on TV production, especially when it’s set in the world of drama that’s often populated with flying drinks, ripping bodices, and evil twins (which, yes, is actually the foundation for one of the series more hilarious episodes.)

Longoria seems to have been born to play this part as her character is equal parts misplaced confidence, crazy and clumsiness, all of which the actress pulls off without really a hint of effort. The supporting cast is just as skilled in their roles, particularly Meneses as Isabela. Every scene with her contains a surprise, and sometimes she doesn’t even have to utter a single word. The only way to truly describe Isabela is as ‘incredibly delicious,’ a phrase that she would no doubt love.

Sure, if you’re looking for some level of ridiculousness, you’ll find it here, but this stylized single camera half-hour comedy is full of smart storylines that will surely illicit genuine laughs from any viewer wanting to enjoy themselves with a series that emphasizes many of the wrong things – for the right reasons – and has just the desired amount of political incorrectness as well.

The real life network of Univision has grown in viewership exponentially over the years (ahem, often beating NBC and other big networks in the ratings) so a series such as Telenovela makes an accurate statement about the cultural make up of America in 2015, as well as being an enjoyable satirical salute to a TV genre watched by millions on a daily basis. That’s quite the combo there.

So, slip into your sexiest attire, pour a cocktail (from the bar that you surely have right in your living room), cock an eyebrow and check out Telenovela. If nothing else, it will make you laugh at the nonsense of it all, and that’s a good thing. A very good thing,

A two-episode preview of Telenovela airs Monday, December 7th at 10/9c right after The Voice, before moving to its regular Monday 8:30 PM timeslot on January 4th. 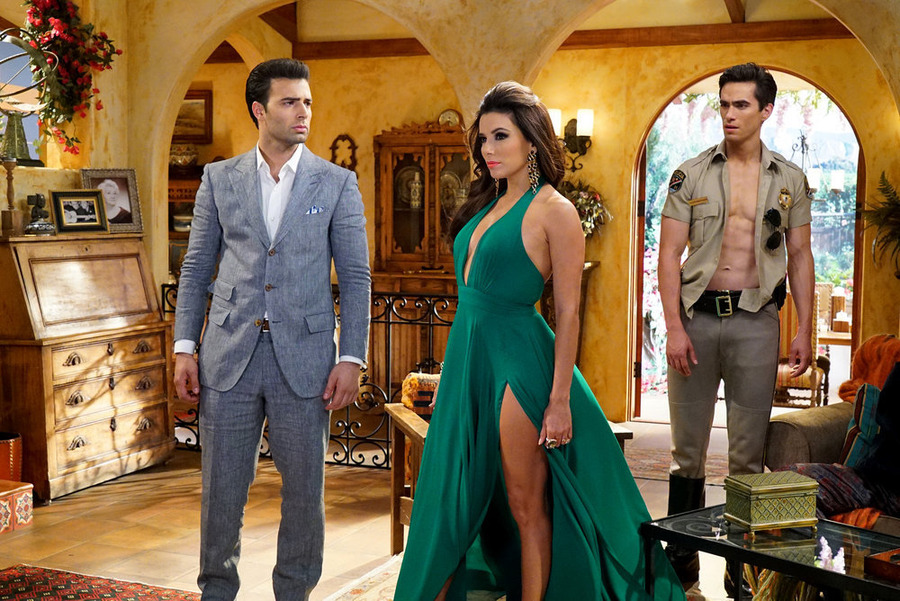