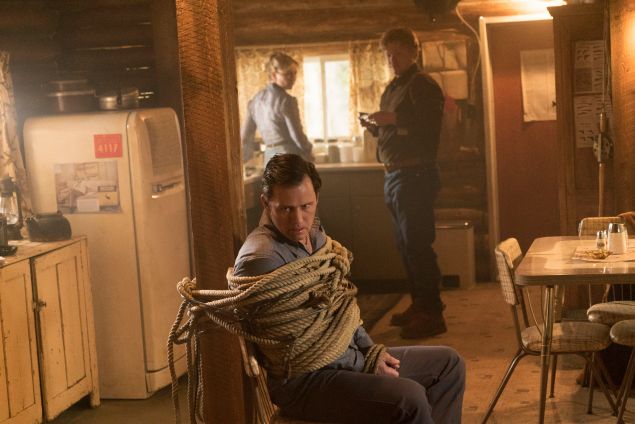 When you want to enumerate the many, many qualities that made “Loplop,” the eighth episode of Fargo’s second season, so goddamn good, you may as well start at the ending. It’s clear by now, if it wasn’t already, that Fargo features the best-directed and edited action sequences since Breaking Bad. The sudden appearance of Hank Larsson and Lou Solverson outside the Blomquists’ cabin is choreographed in excruciating slow motion to dissonant and disorienting drums. It’s crosscut with Peggy running her scissors through Hanzee’s hair, implying that this too may be a life-or-death decision, turning the scissors into a weapon long before Peggy actually uses them as such. The realization of each person in the cabin as to what is about to happen is doled out close-up by close-up, as first Ed sees, then Hanzee sees that Ed has seen, then Peggy sees as well. The slo-mo allows Lou’s reaction to Hanzee’s first shot to become a full-fledged moment rather than a split-second instinctive recoil, enhancing our sense that we’ve crossed the Rubicon. It all ends with Peggy and Ed standing together with their hands up, their dreams of escape gone at last. It’s edge-of-your-seat shit from the start.

The use of splitscreens, the season’s visual hallmark, hits a new level as well. I’ve seen complaints that the technique thus far has been superfluous, gratuitous, a stylistic filigree for its own sake. These complaints I’ve never bought. What ever else they are, the splitscreens are fun, and fun is never superfluous. That said, this week they were used brilliantly, to communicate not just the countless players in this gangland game of thrones, but what’s happening to them as well. As the Blomquists flee together in their car with Dodd in their trunk, each chattering a mile a minute, a splitscreen divides them right there in the front seats, even when they appear to have moments of reconciliation and agreement. When Ed travels from their cabin hideaway to a nearby service station to call the Gerhardts, a shot of Hanzee in hot pursuit of him slowly rises up from the bottom of the screen, like Jaws emerging from the abyss to devour a hapless beachgoer. When Peggy calls her boss (and would-be lover) Constance to apologize for not making the big LifeSpring conference and Hanzee forces her to try and extract information about the Blomquists’ whereabouts, a shot of Ed at the phonebooth attempting another call to the Gerhardts rises up between them, the unspoken secret they both know but can’t say.

Ed and Peggy each reach something of an apotheosis here. It’s clear from her hoarding that Peggy has a preexisting mental illness, and the mounting trauma of everything that’s happened since she hit Rye Gerhardt with her car and drove off has finally pushed her past the breaking point. We find her sitting on the stairs, a few feet above a corpse, communicating with the founder of LifeSpring about whether or not she’s “actualized.” “Be, don’t think,” the wise man instructs her. He himself can do neither, since he doesn’t exist, except as a mental construct she’s concocted to physically cover up the space occupied by Dodd, now tied up in the basement. Even though he can tell she’s lost her mind, it’s still a sight better than what awaits him at the Blomquists’ cabin, where Peggy reacts to his constant brutal rhetoric by stabbing him in the shoulders until he acts more polite.

As for Ed, he’s finally become the kind of low-grade criminal schemer played by William H. Macy and Martin Freeman in the season’s predecessors. He comes up with the plan to trade Dodd back to the Gerhardts in exchange for their freedom, then improvises and switches to Mike Milligan when Bear balks at the deal. He does it with some swagger, too: “Today’s your lucky day, Mike!” Mike’s reaction is a thing of beauty: “Sir, if I kiss you when we meet, would that be inappropriate?” “What? I don’t, I—” “Nothin’, just…well, it’s been a day!” The plan falls apart, of course, when Dodd escapes and nearly kills him, only to be killed in turn by his mutinous employee Hanzee. This leaves Ed with a noose-shaped bruise around his neck, his dull eyes reddened from the strain, looking every bit the torn-up chancer he’s become.

Then there’s the lonesome death of Dodd Gerhardt. Listen, I feel for Dodd, I really do. It can’t be easy, being the grandson of a German immigrant who founded a business empire in the snowy northern regions of the continent, and the son of the stern patriarch who expanded it. When Dodd finally took charge, many parts of the empire crumbled beneath him, a fact he covered up with arrogance, bluster, exhortations to violence against outsiders, inappropriate remarks about his beautiful blonde daughter, unabashed mendacity, and a torrent of misogynistic, racist invective. There’s only one way for that story to end: badly, for everyone involved.

But the real tragedy, it seems to me, is Hanzee Dent, Dodd’s right-hand man turned murderer. He’s killed people for a living twice, first as a highly decorated soldier in Vietnam, then as an enforcer for the Gerhardt family. Now, as he seamlessly transitions from hitman to spree killer, he’s killing on his own, for his own reasons. (Maybe he always was.) Given the ease and skill with which he’s been shown to pull the trigger, the scene in which he’s taunted by racists at a Sioux Falls bar (complete with vomit-soaked plaque commemorating the hanging of 22 Sioux in the alley out back) is soaked in schadenfreude. I mean, you just know these assholes are gonna get what’s coming to them. But it’s still somehow very, very sad to watch Hanzee snap—to see him humiliated for being who he is despite the sacrifices he made for the country that despises him, to see the rearguard struggle of his people against centuries of genocide reduced to wisecracks about Wounded Knee, to watch him wearily decide to shoot two people and murder three others, including two cops who arrive on the scene and call him “Cochise” immediately, out of sheer fatigue with being treated like garbage, by everyone, all the time. He puts it best himself later, when he tries to get a haircut from Peggy, whom he’s finally tracked down. “‘Professional,’ you said?” she asks regarding his preferred style. “Yeah,” he replies. “Tired of this life.” His exhaustion is so total he doesn’t even include himself as the subject of the sentence.

The tapestry of callbacks, allusion, and metaphor draped across the episode is a densely woven marvel. When Dodd hangs Ed from the rafters of the cabin following his escape from captivity, it echoes the hanging of the Sioux enshrined at the bar, as well as the half-finished game of hangman scrawled on the phonebooth Ed’s been using. When Hanzee kills Dodd for one racist outburst too many and incongruously asks Peggy to cut his hair, it’s reminiscent of the story of Samson, one of the male heroes brought low by female perfidy Dodd lists in his mid-hanging rant. The loving closeups of Peggy’s scissors in Hanzee’s long locks recall the sensuous way Hanzee played with Constance’s hair, most likely just before killing her. Both incidents bring to mind scalping, the method of execution most commonly associated with Native Americans (though it was primarily used against them), which would surely be on the mind of all the pop-culture-soaked white people with whom he comes in contact. His encounter with the owner of the service station, of course, is shoutout to the similar scene involving Anton Chigurh in No Country for Old Men, another Coen Brothers classic. What you’ve got here is a classic of its own. 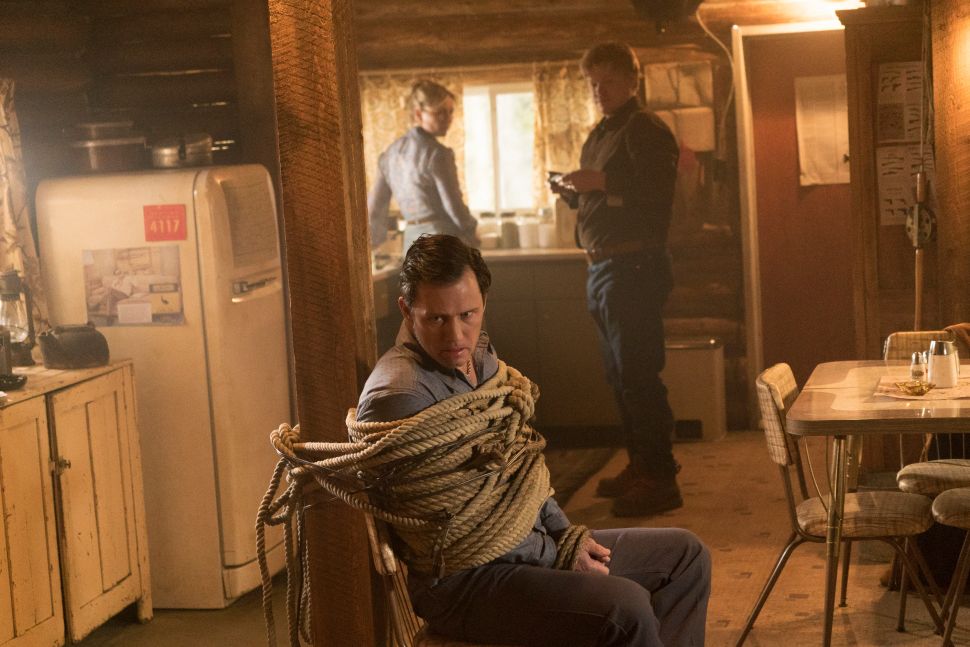