“No one would have believed in the last years of the nineteenth century that this world was being watched keenly and closely by intelligences greater than man’s and yet as mortal as his own; that as men busied themselves about their various concerns they were scrutinised and studied, perhaps almost as narrowly as a man with a microscope might scrutinise the transient creatures that swarm and multiply in a drop of . With infinite complacency men went to and fro over this globe about their little affairs, serene in their assurance of their empire over matter. It is possible that the infusoria under the microscope do the same. No one gave a thought to the older worlds of space as sources of human danger, or thought of them only to dismiss the idea of life upon them as impossible or improbable. It is curious to recall some of the mental habits of those departed days. At most terrestrial men fancied there might be other men upon Mars, perhaps inferior to themselves and ready to welcome a missionary enterprise. Yet across the gulf of space, minds that are to our minds as ours are to those of the beasts that perish, intellects vast and cool and unsympathetic, regarded this earth with envious eyes, and slowly and surely drew their plans against us. And early in the twentieth century came the great disillusionment.”

—H.G. Wells, The War of the Worlds

Four things put me in mind of this passage, one of the most famous and evocative in the history of science fiction, while watching tonight’s episode of Fargo, which I think it’s safe to say contains one of the finest action sequences in the history of the medium. The first should be obvious enough. When the UFO that has hovered just above the events of this season swung low for a close-up look at the Massacre at Sioux Falls, it did more than save Lou Solverson’s life, and most likely Ed and Peggy Blomquist’s as well, at the expense of Bear Gerhardt’s. It marked the moment at which the moral catastrophe of the violence that has dogged these characters from the start finally overflowed the banks of normalcy, of reality, and needed to conjure something supernatural into existence just to find an image commensurate with its enormity. This is the function of the fantastic in fiction, when used well: to express in visceral, visual terms emotions too intense for the vocabulary of the everyday to articulate. The mute spaceship, the baleful gaze of its spotlights draped over combatants and corpses alike, a liquid discharge dripping down upon them like so much blood, appearing out of nowhere and then disappearing with no more explanation than when it arrived…If this show, to say nothing of this year in real life, has taught us anything, is it not that this is exactly how the eruption of violence in our lives feels—instantaneous, inexplicable, and overwhelming?

The second thing is the similarity between the start of Wells’s novel and that of the episode itself. Quite unexpectedly, we open on a copy of The History of True Crime in the Mid West, the book that, judging from the similarity between its explanatory text and that which opens every episode of the show, is where Fargo finds its stories. In the plummy tones of series veteran Martin Freeman, now sounding less like Lester Nygaard and more like Bilbo Baggins, the book’s narration spells out the nature of the infamous Massacre, the centrality of the Blomquists to understanding it, and the mystery of Hanzee Dent, the man who perpetrated it. The voice is reminiscent of Wells’s narrator, but the task it outlines is much closer to that of the entities that narrator describes. While not exactly the vast and cool and unsympathetic intellect of the Martians, the book’s author nevertheless watches keenly and closely as the Gerhardts, the Blomquists, the cops, and the Kansas City mafia wage war, a battle he finds fit for study. Perhaps it’s worth considering the ways in which history, real or imagined, resembles the human zoology of those Martian invaders—the way that the gulfs of time which separate us from those we read about offer false comfort. The distance convinces us that we, knowing what they do not and could not, are in some way superior, immune to the passions that drove them and the mistakes that doomed them.

The third thing is the presence of the most unsympathetic intellect on the show, that of Hanzee Dent. Over the past two episodes, as he transitioned from hitman to spree killer to full-fledged mass murderer, Hanzee has emerged as a compelling and terrifying villain. This is all the more true because, despite the bafflement of the book’s author, he is in some ways easy to understand. The specific straw that broke the camel’s back is left wisely unspecified—was it Dodd’s abuse, Bear’s mistrust, the racist rubes at the bar, the plaque that commemorated the murder of the Sioux outside it? Ultimately, his weary declaration that he’s “tired of this life” is motive enough. So with the skills he learned at the feet of both a family and a nation who despised and abused him, he slowly and surely drew his plans against them all, betraying the Gerhardts with no more emotion than a barely perceptible grimace of satisfaction, and an embrace of their matriarch Floyd that turns lethal with the thrust of a knife. Freeze frames isolate him and his victims, illuminated by muzzle flash, symbols of violence as monumental as a Martian’s tripod.

The fourth thing: It’s me, us, the viewers ourselves. All season we’ve watched the Gerhardt gang war claim life after life in a rising tide of blood, secure in the promise, made way back in Season One, that the wave would crest and wash over Sioux Falls with tidal totality. Sure enough, this episode delivered, and not merely in terms of bullets fired, blood spilled, and body counts racked up. The shootout was stunning just as much for its tremendous emotional catharsis, as character after character, storyline after storyline, got what was coming to them. Bear and Lou’s showdown, Hanks’ brave stand, Hanzee’s silent vengeance, Floyd’s undoing, even comic-relief moments like the Blomquists’ escape or Ben Schmidt’s one brief moment of victory or the grim delight of watching all those Keystone Kops get their asses handed to them…the payoff was just tremendous. These moments had an air of inevitability, the airtight storytelling logic of Chekhov’s gun. This, in turn, resonates with the predicament this country finds itself in today. What is our current situation—our plague of semiautomatic murder, endless war, and the widespread celebration of bigotry—if not the real-world embodiment of the great Russian playwright’s dictum that a gun, once placed in position, must eventually be fired? For all their observation, the Martians failed to realize they were witnessing their own eventual undoing in the form of the common cold. As we scrutinize and study these characters from our lofty perch while they busy themselves with their various concerns, can their plight enlighten us to the catastrophes that, even now, we can’t see coming? 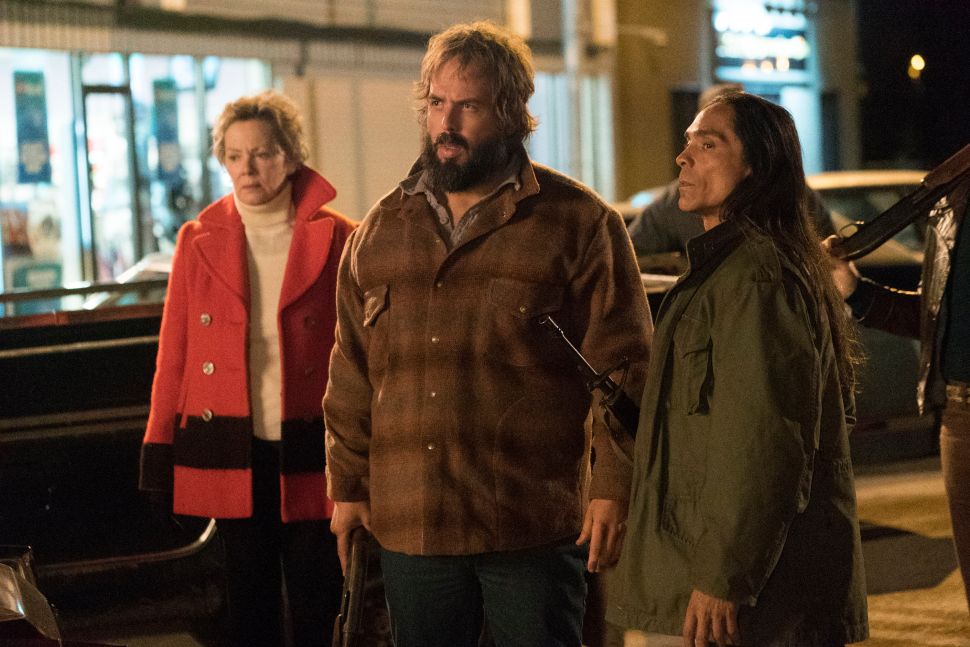