When it comes to television soundtracks, there are good music cues, and there are great music cues, and Fargo Season Two has had plenty of both. And then, my friends, there’s “War Pigs.” Black Sabbath’s orgiastic antiwar anthem enters “Palindrome,” the show’s stunning season finale, as a literal nightmare—an accompaniment to Betsy Solverson’s vision of a glorious future of Costcos and Game Boys and family dinners, shattered by the hatred and violence that runs so deep in this land’s veins it’s unlikely to ever be pumped clean. It’s a fucking mighty moment, a sign that showrunner Noah Hawley, director Adam Arkin, and company have an unshakeable grasp of the themes of their show and the period pop-culture they’ve used to advance them. And it’s a prophetic moment as well. The song foretells the day of judgment when the rulers responsible for the slaughter are made to answer for their crimes, as all their plans and strategies come to naught. If you want a picture of the future for the characters we’ve spent the season following, from kings and conquerors to victims and vanquished, you’ve got one.

It begins with the Blumquists. Fleeing from the scene of the Sioux Falls Massacre, with its architect, Hanzee Dent, in hot pursuit, Ed takes a shot to the chest, while in shades of No Country for Old Men a passing motorist is killed outright. Ed and Peggy flee to a supermarket, where Peggy (to her credit) sends an employee running for safety before locking herself and her injured husband in a meat locker. While Ed reels from his wound, Peggy retreats once more into fantasies of the future. But this is a journey her husband, finally, refuses to join. “Peggy, I don’t think we’re gonna make it,” he says, referring not to their prospects for survival, nor even to his own injury, which soon proves to be mortal, but to the fate of their relationship itself. The weight of what they’ve gone through has finally crushed his hopes for a life together; actor Jesse Plemons’s dazed look says as much about the impact of this realization on the character as it does about the bullet hole in his chest. Peggy backtracks, offering to help put things back the way they were, but she can no more do that than she can pump the blood back into his body. However much he regrets it, he dies dumping her. She departs this life as well, for a fantasy world in which Hanzee has unwittingly recreated the fiery climax of the World War II movie she’d watched in the cabin earlier in the day. Even a desperate last stand, knife in hand, against her pursuer is preferable to facing the true consequences of what she and Ed did. They plotted a course that led directly to Ed’s death, but everything they’d fought to preserve and protect was already gone before he breathed his last.

“You’re always trying to fix everything,” Ed tells Peggy before he dies, trying to explain his decision to leave her, “but sometimes nothing’s broken.” The tragedy of Peggy is that for her, everything is broken, but the cracks are too fine for anyone else to see. Riding back to Minnesota following her rescue-turned-arrest by Lou Solverson and hapless, heartbroken Ben Schmidt, she seems to have recovered from her break with reality, and is back to dreaming of life on the coast, even if this time it’s in a prison cell. Trying to make sense of this person, Lou recalls his last days in Vietnam, when he witnessed a desperate South Vietnamese helicopter pilot deposit his entire family on to the deck of Lou’s overcrowded ship from midair, then crash his chopper into the sea and swim to safety himself. This feat of crazed courage, it seems, helps him contextualize Ed’s actions on behalf of a woman whose character he clearly finds lacking: Peggy was Ed’s family, and men protect their families at all costs. “We act like it’s a burden,” he says, “but it’s really our privilege.”

Peggy doesn’t get it, but that lack of comprehension is a two-way street. Lou initially scoffs at her claim that she too is a victim of everything that happened after she ran Rye Gerhardt down: “A victim of what?” “You wouldn’t understand,” she says. “You’re a man.” It’s all a lie, she explains, the idea that women can have it all—that they can be a wife, a mother, a career woman, and an enlightened being simultaneously. Her experiences over the past few weeks was basically her plowing into that truth until it shattered her mental windshield. At that point, all the discontent of a lifetime of ignored desires, all the narcissism and deceit that emerged as a reaction formation, every negative thing that had been hiding in the basement of her brain like the stacks of hoarded magazines underneath her house was finally given a chance at actualization. Lou’s response? “People are dead, Peggy.” It’s dismissive, and in many ways deservedly so—Peggy wouldn’t know empathy if she ran it over in the street—but it shows that even a mensch like Lou is so caught up in the burdens of being a man that the burdens of being a woman face an uphill battle for acknowledgement. If that were Hanzee in the back of the police car, talking about the trauma of his experiences as a tunnel rat, it’s unlikely Lou would have shut him down so summarily. Nothing that happened to Peggy and Lou, from the death of Rye Gerhardt to the arrest of his killer, brought them any closer together.

Crossfire is one thing, but those who waged the war took hits of their own. True to Joe Bulo’s promise, every Gerhardt was wiped from the face of the Earth, the whole lot of them reduced to a montage of corpses in the opening minute. But their victorious enemy, Mike Milligan, fared little better. In a move that combines the gusto of the historical hotshots about whom he knows so much with wit of those who wrote about them, he and his surviving Kitchen Brother travel to the Gerhardt farm, where they free the family’s aged cook from servitude and murder the hip Buffalo hitman they’d hired. Mike spends the entire time in his usual good humor, dispensing wisdom about gods and kings, categories into which he now places himself. “Today is my coronation day,” he proclaims, assuring his subject that America does indeed do kings: “Oh, we do, we do. We just call them something else.”

His reign is short lived. His boss back in Kansas City has a different position in mind for him: middle management. Rather than rule the territory he conquered, he’s going to help administer it from afar in a tiny corporate office, where he’ll spend his days dressing conservatively and filing forms in triplicate. He poured his heart and soul into murdering his way to the top of the Minnesota food chain, and in exchange he got a desk job. Mike’s fate is like the end of GoodFellas if Henry Hill had to live the rest of his life like a schnook while still technically working for the mafia. It reduces the grandiosity of his personality and actions alike to a whoopee cushion.

For sheer surprise, though, Hanzee Dent had them all beat. This of course had been the case for several episodes now, as the Native American enforcer slowly moved to the center of the narrative, then blossomed into one of the most compelling and moving characters of the year, even as his body count skyrocketed. Given the outcomes typically faced by adherents to the sad-killer archetype, I’m not sure anyone expected him to make it out alive. But not only does Hanzee survive—he thrives. He adopts the new name “Moses Tripoli.” He gets a facelift to match. He takes a deaf-mute kid and his best friend under his wing after murdering their bullies, turning them into vicious killers in their own right. Eventually, it seems, he deposes the kings of Kansas City, whoever they may be, and seizes the throne of the Fargo organized crime circuit himself. We’ve seen his reign before, in fact: He’s Mr. Tripoli, the gluttonous crime boss we met briefly last year…before he was killed, mainly for laughs, by Lorne Malvo, offscreen, while a glorified Key & Peele sketch played in the foreground. Thus, the grand tragedy of Hanzee Dent, the searing story of anti-indigenous racism, the triumph of the KC mob over the Gerhardts, Hanzee’s off-season return and revenge and rise to power in his new identity—by the time last season wrapped up, none of it mattered anymore in the slightest. The entire Season Two storyline was essentially over before it even began. Far from an easter-egg parlor trick, the “Hanzee is Mr. Tripoli” gag is the season’s most nihilistic statement.

Yet it ends on a note of uplift, where there was every indication we were going to get otherwise. Betsy Solverson survives her health scare, now revealed to be a side effect of the experimental pills she was taking to treat her cancer rather than a result of the cancer itself. Her father, Hank Larsson, survives his gunshot as well. And when she and he and Lou are reunited weeks later, not even Betsy’s earlier discovery of her dad’s seemingly manic scribbling of an alien alphabet derails them. For one thing, he and Lou have actually seen an alien spacecraft. (“Maybe leave that subtext,” the older cop tells his son-in-law in terms of how the UFO should figure into their report.) But more importantly, Hank’s explanation is personal, profound, and, frankly, beautiful. Following the death of his wife, and amid the lingering psychological scars of World War II, Hank began investigating the idea of how all sentient beings, whether from different sides or different worlds, communicate. “Miscommunication—isn’t that the root of it?” he asks, an echo of his run-in with Mike Milligan weeks earlier, when the charming hitman singled out their capacity for reasonable conversation as the reason both of them were able to exit the encounter alive. If there were a universally understood language, if there were values we could all agree on, could we avoid all the conflict, the violence, the brutality? The idea, Hank says, soon became all he could think of. “You’re a good man,” Betsy tells him. “Well, I dunno about that,” he replies, his voice breaking almost imperceptibly courtesy of a never-better Ted Danson. “But I like to think I got good intentions.” By now we’ve seen the future, and even at its rosiest it’s a future that does not include Betsy and Hank for long. But for now, for these characters, good intentions are enough to preserve them. If the outcome is fixed, if empires always crumble, if kings inevitably fall from grace, maybe good intentions are the only thing that matters. 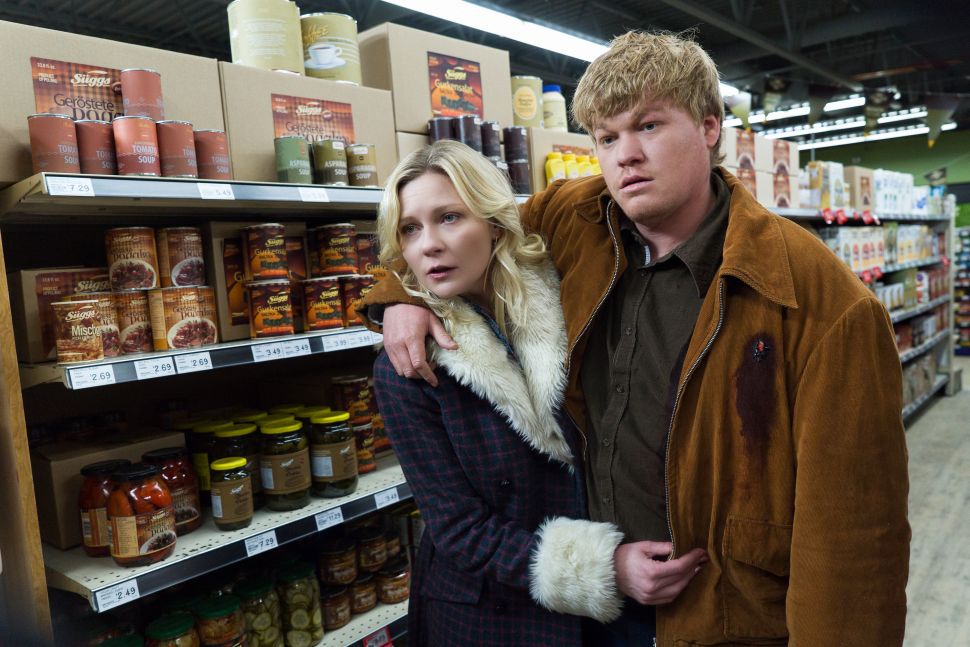