Last week, FiveThirtyEight quietly began publishing a weekly puzzle. Called The Riddler, it features the kind of logic-heavy questions one might find on a Mensa test—appropriate for Nate Silver’s wonky, data-driven website, which is owned by ESPN.

The Riddler is edited by Oliver Roeder, a senior writer at FiveThirtyEight who does the New York Times crossword every day. “If I run across a puzzle online, it’s really hard for me not to solve it,” Mr. Roeder told the Observer in a phone interview.

Although a number of publications have begun publishing puzzles on a regular basis—The Wall Street Journal recently started running a daily crossword, and in October, BuzzFeed launched a daily crossword—Mr. Roeder said it was a coincidence that FiveThirtyEight is entering the puzzle game now.

The idea to start running a weekly puzzle came about, Mr. Roeder said, in the last couple of months. After he got approval from his editor, Chadwick Matlin—and talked through what the format would be—he got to work assembling a stockpile of riddles.

The first question, titled “What’s the Best Way to Drop a Smartphone?,” was written by Laura Feiveson, an economist at the Federal Reserve’s Board of Governors, and Mr. Roeder plans to commission puzzles from FiveThirtyEight’s numbers-literate readers, too.

Reader feedback, he said, has been promising. “I’ve never had so much interaction with readers, over email, on Twitter, in the comments section.”

Mr. Roeder, who is 30, began working at FiveThirtyEight in September 2014, after he wrote some freelance pieces for the website. Before entering journalism, he was on the academic track—he got a Ph.D. in economics at The University of Texas. (His focuses were, fittingly, game theory and applied microeconomic theory.)

At FiveThirtyEight, Mr. Roeder—who was once a competitive Scrabble player—has covered the gaming world, having written about chess as well as the American Crossword Puzzle Tournament.

“People who like to play games like to solve puzzles,” Mr. Roeder said, “so it seemed very natural to try to create something for FiveThirtyEight readers.”

“We have a very strong data focus,” Mr. Roeder added, “but coming with that is a focus on math, probability, logic, and it made a lot of sense for us to do something that was focused on those things.”

Mr. Roeder imagines that each riddle will take about 15 minutes to solve (though this math-challenged reporter could spend all day on one of them and come up empty). He hopes that it will be simple enough that solvers can keep it in their head while they’re walking to lunch, but tricky enough that it takes some sort of concerted effort.

Mr. Roeder said he imagines that the puzzle will evolve over time, but the riddles published so far are emblematic of what’s to come. He is at work on his own puzzle, but it won’t be ready, he estimated, for a few weeks.

“There will be an Ollie original at some point,” he said. 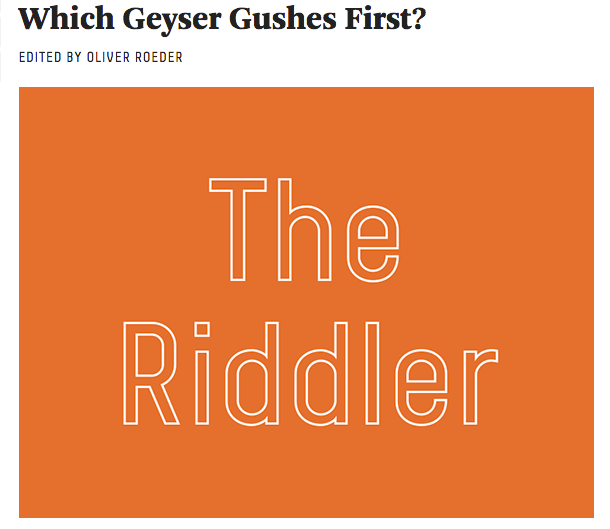