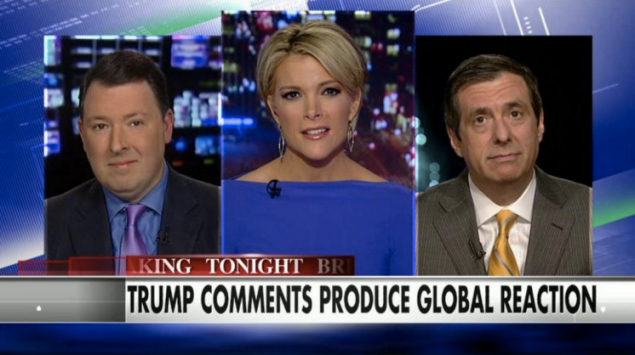 On Monday, when Republican Presidential candidate Donald Trump urged a ban against Muslims entering the United States, most cable news programs treated his threat as a major story during a period of terrorism and voter paranoia.

“Big tipping point in the campaign,” Fox media critic Howard Kurtz told hostess Megyn Kelly on The Kelly File. “Any news organization that wasn’t all over it would be guilty of malpractice.”

Mr. Kurtz said this on Tuesday. He must have missed Ms. Kelly’s show on Monday, when the story broke. Because on that day, when Ms. Kelly finally got around to reporting the Trump story near the end of her one-hour show, Fox’s 9 p.m. news actress acted as if Mr. Trump’s racist and fascistic statement was not really news.

And she ridiculed those who disagreed.

“Of course, all these networks then ran to cover his campaign event tonight, which is what he wants,” Ms. Kelly said. “He’s very smart at manipulating (pause) SOME media.”

The pause and emphasis on the word “some” showed her disdain for her lesser competitors. Rather than put her opinions into words, Ms. Kelly often uses her tone of voice and facial expression to signal her approval or disapproval. (Her “shocked dismay” is particularly popular. “Coming up: You won’t believe…)”

By Tuesday, Ms. Kelly—or her bosses—had changed her official tune if not her overwrought tone. The Trump story, although more than a day old, was suddenly fresh news to Ms. Kelly, who opened her show with a rehash and presented some of the second-day reaction.

“Hateful… racist… and un-American,” Ms. Kelly said. “And that’s from his Republican rivals.”

Still, she maintained the news media were to blame as much as Mr. Trump.

“We are in a full-blown media circus,” Ms. Kelly said. “The Pentagon—yes, the Pentagon!—saw fit to weigh in. Dick Cheney recoiled… No question that remarks like this from the Republican front-runner are a big story… The media has to cover it. But—wow! Really?”

At the end of one rant, Ms. Kelly put her fingers to her forehead and said, “My head is going to explode.”

That might be interesting to see on live television and it would probably draw a bigger audience than The Rachel Maddow Show on MSNBC at the same time. Ms. Maddow is the antithesis of Ms. Kelly. Just say Ms. Maddow is liberal and Ms. Kelly is conservative and leave it at that for now.

The real comparison is in the content of their programs and Ms. Maddow clobbered Ms. Kelly on the Trump story.

As usual, it took Ms. Maddow a long time to get to the point Monday. But by 9:08 p.m., after a tedious review of other Trump Moments, she finally said: “Today, Mr. Trump has done something that is causing the rest of the Republican Party to choke.”

At 9:14 p.m., she got around to showing the video of Trump reading his statement aloud at a rally.

“Donald J. Trump is calling for a total and complete shutdown of Muslims entering the United States until our country’s representatives figure out what the hell is going on,” Mr. Trump said, reading in the third person.

As Molly Ivins once wrote of a Patrick Buchanan speech: “It sounded better in the original German.”

One of Ms. Maddow’s most interesting guests was Richard Engel, the foreign correspondent who seemed to experience cognitive dissonance in the U.S.

“I come back and things have gone totally mad,” Mr. Engel said. “The country is in a panic.” Referring to “demagoguery” in the campaign, Mr. Engel concluded: “This is really not the country that I know… today seems like a seminal moment and it’s not a good one.”

That “horror movie,” to be fair to Ms. Kelly, included Ms. Kelly in one of its early scenes. During the first Republican debate, Ms. Kelly challenged Mr. Trump over his rude and sexist comments about women. The next day Mr. Trump implied she was on her menstrual period.

It is both good and bad for her that she works for an organization that has helped mold the Republican Party to what it is today and build up Mr. Trump to what he is today.

It’s been coming gradually. Remember Sarah Palin’s acceptance speech as the 2008 vice-presidential nominee? It sounded as if it could have been written by Sean Hannity or Rush Limbaugh. Mr. Trump talks a lot like that but with more confidence and savvy and often without a script.

Remember how Fox boosted the Tea Party in 2010 as a counterweight not only to Democrats but also to the Republican establishment? And how Fox gave oxygen to Mr. Trump’s assertion that President Obama was not born in the United States?

In many ways, Mr. Trump is the Frankenstein monster of Fox News genius Roger Ailes. Mr. Ailes built an empire on sanctimonious commentators who are anti-black, anti-immigrant, anti-intellectual, anti-science and belligerent.

On the website Media Matters, Eric Boehlert wrote, “Trump is now on the verge of devouring the entire Republican Party in terms of its branding… how can the G.O.P. reach out to the mainstream, independent voters next November when Fox News defends or explains away Trump’s bouts of Birtherism and Islamohobia – while he leads the Republican polls?”

Mr. Boehlert quoted a tweet by Gabriel Sherman, who wrote a book about Mr. Ailes. 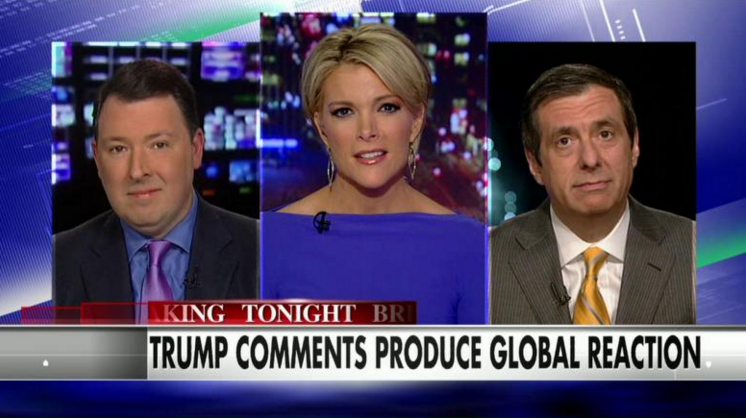