In the novel Bosses Don’t Get Kneecapped, someone will get hurt when a U.S. Attorney and state Attorney General compete with each other for the governor’s office, accelerating their arrests of public men in an election year in hopes of getting an edge. At first, the usual people wind up behind bars – gang members, low-level political operatives, flunky elected officials and small-time mayors – but as the season intensifies, the pressure mounts for more powerful quarry.

Before it’s all over, with everyone else neutralized, dead, or in jail, the U.S. Attorney and Attorney General find themselves competing to see who will occupy the governor’s mansion and who will be the last one led away in handcuffs.

For an interview with the author, go here.

Insiders had already marked Jimmy Cahil politically hazardous, and now, as he swam out of a spill-zone of radioactive waste, he could finally count himself unconditionally toxic. Finding the garbage truck where Russo’s stooge dumped it and key in the ignition, he coaxed over the engine, stepped heavily on the gas, and rattled toward that distant smoldering wreck otherwise known as the capital city. He realized immediately why no one had stolen it; not only did the truck barely run, but he’d have trouble keeping all four tires on the ground at once. The cab shuddered with the threat of breaking loose from the body, and the width of the rack jutted so far over the cattails on either side of the unlit maintenance road that if he nudged a hair too hard left or right he’d drop the rig in the muck.

Alone in darkness he found himself again trying to figure out who would crack first: his boss, who hated him spending time with his would-be girlfriend, or the girlfriend intent on tomahawking his boss, even as he wearily wondered whether to throw over the old man for her or ditch her for the old man. He had been loyal to both, at least within the framework of the business if not altogether conventionally, and felt whipped now with the belief that neither backed him.

Former acting governor and current president of the state senate, the old man had kept his operative guessing about his gubernatorial intentions, knowing Jimmy – consigned for a lifetime to back alley deal-making and dive-taking – couldn’t resist running a statewide campaign, even if it meant the kid would have to eat any resulting indictments…

Get your holiday copy of the original PolitickerNJ novel, Bosses Don’t Get Kneecapped by PolitickerNJ Editor Max Pizarro, for just $20.
Checks should be made out to PolitickerNJ.
Please Mail checks to:
Observer Media
PolitickerNJ
One Whitehall Street
7th Floor
New York, NY 10004 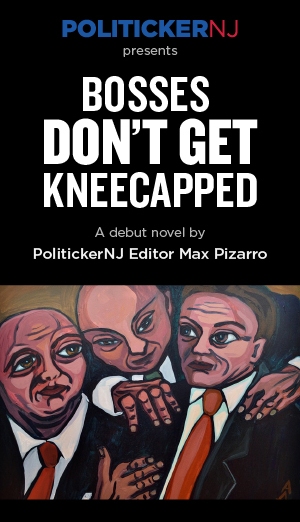