The truth is, Bravo’s only scripted series, Girlfriends’ Guide to Divorce, might just be the most inaccurately named series on television at this moment. While the central character is grappling with a divorce, there are plenty of other characters who are not. And, not all of the featured characters are women.

“Yeah, I agree that the title is a bit misleading,” admits Executive Producer Robert Duncan McNeill. “This isn’t just about divorce. It’s about love, marriage, and commitment or lack of commitment and all the feelings that happen when you try to have meaningful connections with other people. We’ve all have various types of relationships in our lives and this show is about the levels of intimacy in those relationships and how you handle those. And, we work really hard to show both the male and female perspectives accurately in all of these situations.”

Girlfriends’ Guide to Divorce follows self-help writer Abby McCarthy and her complicated relationship with her estranged husband Jake. Through it all, the one constant in Abby’s life remains her girlfriends – Delia, Phoebe and Jo – all of whom are dealing with their own issues.

But it isn’t all about the ladies, says McNeill. “Paul Adelstein, who plays Jake, is also a writer on the show so he’s a big part of the story that we’re telling and he brings the male perspective into all areas of the storyline as well. In fact, it’s funny, when there’s a big Abby and Jake fight scene, which are always well-written and really show both sides of the disagreement, we have a running joke on set in that we take a vote every time we film one of those scenes about who won the argument, because both sides are so well represented.” He laughs a little as he says, “I think Paul won the last one so he holds the trophy for now, but that could change at any time.”

McNeill goes on to explain that while, “Abby is the central character and the story is being told through her, that doesn’t mean she’s always going to win every battle. That just wouldn’t be realistic. There are going to be times that someone else is going to make a better point or show Abby that she’s not looking at things reasonably.”

As the series is now headed into season two, McNeill says not to worry if you haven’t seen season one. “Well, season one is on Netflix so you can binge it if you want, but if you want to just jump in now you can. This season’s focal point is about where life takes you when you make some big decisions. It takes courage to try new things and sometimes that courage is rewarded, sometimes it’s not.”

Getting a bit more specific about what’s up for Abby and the ladies, McNeill says, “They’re all dealing with the idea of trying to do everything that you want to do and need to do and ultimately just trying to do too much. There’s this pressure to look fabulous on Facebook and have all of your relationships be rich and at the same time have a great career and be a great parent. This is about people pushing themselves too far before they’ve had a chance to sit back and figure out what’s really important. I think all of us can relate to all of that in some way.”

Guest actors appearing this season on Girlfriends’ Guide include Carrie Fisher who returns as Abby’s book agent Cat, Retta (Parks and Recreation) playing Barbara, a rival editor who is less than thrilled with Abby’s optimistic approach to divorce, Megan Hilty (Smash) as a southern belle who is married to Jo’s ex-husband and Mark Valley as a confident and charming TV personality who pursues Abby.  Barry Bostwick and Lesley Ann Warren also guest star as Abby’s parents.

Four glamorous gal pals living it up while tackling tough life issues might draw some to compare the series to a former beloved show – Sex and the City. As for McNeill feelings about that, he says, “I don’t know about anyone else but I think it’s a great analogy. That was a great series, with a lot of breakthrough moments that showed what it’s like to move through the ups and downs of life. Who wouldn’t want to be compared to such an iconic series? But, the big difference is that the characters on Girlfriends’ Guide are at a different place in their lives than those women were. And, because they were a half hour show, they didn’t have as much time to explore the deep emotional aspects of relationships. Girlfriends’ Guide has some outrageous moments like Sex and the City and we also have some ‘tear-your-heart-out’ moments as well. It’s just like life – you’ll laugh and you’ll cry.”

To get viewers to invest in the series, particularly when there is so much content available, McNeill says, ”I think that people look for things that are partially an escape and partially a way to connect emotionally and I think our show really accomplishes both of those goals. There’s a sort of wonderful wish fulfillment for viewers in that we’re showing this glamorous Hollywood lifestyle with parties and great conversations over wine and shopping and looking fabulous all the time, but we’re also showing that everyone, no matter your income or lifestyle, has problems and many of those problems are universal to a lot of people. So we have the combination that many viewers are looking for – the fun escape and the emotional connection.  The bottom line is Girlfriends’ Guide to Divorce has all kinds of glamour, but with a lot of heart.”

Girlfriends’ Guide to Divorce airs Tuesdays at 10et on Bravo. 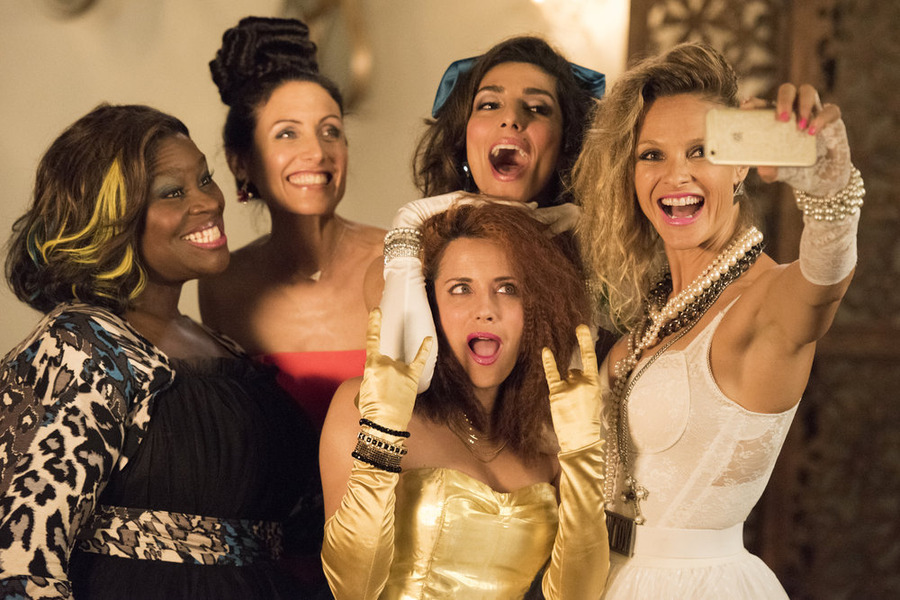