The nominations for the 73rd Annual Golden Globes were released Thursday, so I figure it’s time we all start arguing. Below is the full list of the television nominees, along with the show or actor that should home the category. Then, because at this point all award statues should just be a golden middle-finger, who will actually take home the category.

Who Should Win: The Golden Globes are sometimes like the Emmys’ punk-rock cousin, in that they occasionally throw a bone to a lesser-known but highly-deserving show that the Emmys don’t even nominate. Looking at you, The Affair circa 2014. Which is why I’m holding out hope for Mr. Robot here, a show that basically set the established “summer is for losers” model of TV on fire (digitally, of course). Narcos was good, but featured so much narration it might as well have been a book-on-tape, while Outlander is…Outlander. Game of Thrones coasted through half its  fifth season because it knew ‘Hardhome’ was coming to kick you in the dick, and Empire‘s craziness, while still crushing ratings, is dangerously close to flying over a shark on a jet ski. Meanwhile, over on USA NETWORK NEXT TO SUITS, Mr. Robot settled in as one of the top five shows this year.

Who Will Win: Probably Game of Thrones, honestly. Don’t count Empire out, though, which wouldn’t be the most terrible thing for the snowy white blizzard that is television.

Who Should Win: Casual. Yeah, Casual. The Golden Globes gave not only Amazon but the internet itself its first ever award show victory when Transparent won last year. Let’s give one to Hulu. Just another step in the “Oh, I don’t own a TV” revolution. (For the record, Comedy Central’s Review, which has exactly zero Globe or Emmy nominations to its name, is better than 95% of these shows).

Who Will Win: I’ve argued far too much for far too long about the whole “Transparent isn’t a comedy!” thing, sometimes on here, mostly to the animals outside my apartment, (even the show’s writers refer to it as a “trauma-dy”), so let’s just boil it down to this: Transparent is a very, very amazing show and deserves awards in all categories. This is a pretty stacked category actually–even Mozart in the Jungle was pretty darn okay–but I find it hard to argue against Transparent.

Who Should Win: Crazy Ex-Girlfriend is far better than a musical-comedy on the CW has any right to be, and Rachel Bloom is a damn revelation as Rebecca Bunch (Bloom created the thing, too).  It’s pretty standard procedure that Julia Louis-Dreyfus and Veep deserve it every year, but I like my award winners fresh-faced and surprising, as well as earned. Bloom is both, and I’m rooting so hard for that weird  little, slowly-finding-its-audience show to survive.

Who Will Win: Rachel Bloom, for Crazy Ex-Girlfriend. The Golden Globes proved it’s not a lifetime achievment giver when Gina Rodriguez, deservedly so, took this category last year for Jane the Virgin. Could Ms. Rodriguez perhaps do it again? Maybe! CW fight!

Who Should Win: Honestly, Eva Green has put on startlingly manic and genuinely frightening performances over on Showtime’s Penny Dreadful for two seasons now, and I’m pretty sure like ten people even know about it. It’s reaching Tatiana Maslaney in Orphan Black levels of “Come on.” It’s tough, I guess, being one of about five good things about a show. Long-shot, but give it to her. Or, Viola Davis for being both fantastic in How to Get Away with Murder and capable of startling Hollywood by saying very, very true things to it.

Who Will Win: Viola Davis and Taraji P. Henson, because Annalise Keating and Cookie Lyon, due to the performances these women pull off, are genuinely on their way to “iconic TV character” status, bigger even than the individual shows they’re on.

Who Should Win: Oh dear, my Robot-bias appears to be showing. Mr. Malek deserves this. In a medium that often rewards BIG, LOUD performances he kept it under-the-radar for an entire season. When Elliot exploded, he did it quietly, behind Mr. Malek’s saucer eyes.

Who Will Win: Don Draper’s farewell tour continues. And you know what? Awesome. Giving Mr. Hamm any award, really, for the final season of Mad Men might feel like a residual pat on the back for all the awards he didn’t win over seven season. But it’s not like that. The only reason the snub uproar exists is because Mr. Hamm, despite the competition, arguably did deserve to win every award season. Mad Men‘s farewell season was no different.

Who Should Win: It’s really strange to be talking about an awards category, and Patrick Stewart may be the most likely to win. I’d love it, really, but Blunt Talk seemed to be so excited to nab Patrick Stewart that it forgot to give Patrick Stewart anything to do. SO! Safe choice: Jeffrey Tambor, because of course. Best choice: Aziz Ansari.

Who Will Win: Jeffrey Tambor, because of course. (But imagine ROB LOWE??)

Who Should Win: Fargo. Fargo, Fargo, Fargo. Every day and every night and twice on Sunday Fargo should win. (sidenote: Wolf Hall is one of those things I feel like has been getting nominated for awards since, like, 2006. It’s like Frozen‘s ‘Let it Go,’ except that song won sometimes).

Who Will Win: American Crime or Fargo are really the only miniseries I see winning here. And they should enjoy it, while they can, until John Travolta’s lawyer face arrives and takes every mini-series category in existence.

Who Should Win: You know what? Fuck it. Burn it. Burn it all down…give this to Gaga. Before AHS: Hotel debuted everyone expected Lady Gaga in a Ryan Murphy show to be as over-the-top as humanly possible, like Jessica Lange in a meatsuit. But turns out Lady Gaga is…pretty great at being understated? Well, as understated as a vampire hotel manager can be.

Who Will Win: Fargo or American Crime yet again. Or, Kirsten Dunst or Felicity Huffman to be exact. And they should enjoy it, while they can, until John Travolta’s law…

Who Should Win: Oscar Isaac, and he should except the award by flying in on an X-Wing because THE FORCE AWAKENS COMES OUT IN A WEEK. But seriously, Show Me a Hero, to me, was pretty disappointing for an HBO mini-series from David Simon. But Mr. Isaac, as he is in most projects, was far and away the standout.

Who Will Win: Idris Elba, for Luther, and his acceptance speech will be cooler than anything any past or future James Bonds have ever said.

Who Will Win: Weirdly enough, though, if Mr. Robot IS going to win something, Mr. Slater in Supporting Actor is the most likely. I’m pretty sure Will Scarlett from Kevin Costner’s Robin Hood is about to win a Golden Globe in 2015, everyone.

Who Should Win: The real madness here is this is the first nomination Maura Tierney has gotten for The Affair; I mean, it’s only been on for a season and three quarters, and last year Helen was largely confined to a “But Noooooah” role, but still! Maura Tierney deserves this, for consistently playing the only character to (usually) act like a real-life human being on The Affair.

Who Will Win: Maura Tierney. You can call that prediction “cheating on your wife on a trip to Montauk,” because it is a guarantee. 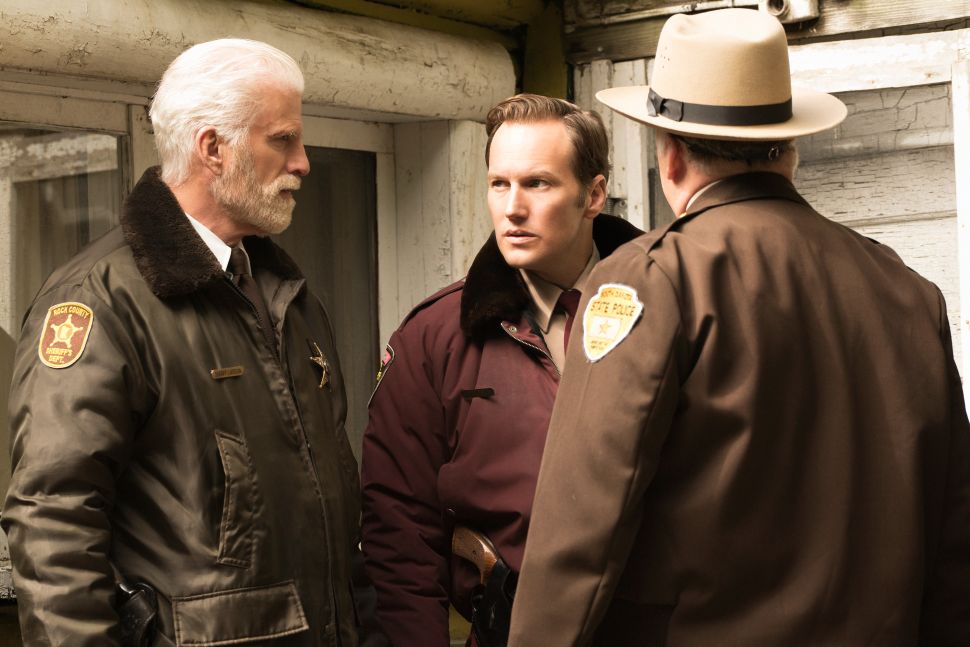