Speaking at the National Immigrant Integration Conference—just blocks away from her national campaign headquarters—the Democratic front-runner for the White House lambasted Mr. Trump’s calls for a barrier on the Mexican border and large-scale removal of undocumented foreign nationals, which she said would “drag us backward.” She also attacked the rhetoric of his campaign kick-off in June, when the candidate claimed Mexican immigrants are “bringing drugs” and are “rapists,” and mocked his “Make America Great Again campaign slogan.”

She also assailed Mr. Trump’s call for a moratorium on Muslim immigration in the aftermath of the San Bernardino shooting.

“At a time when a lot of Americans are fearful about future attacks here at home, some candidates are even stoking those fears more and turning people against Muslim-Americans, saying some really hateful, hurtful things,” she said.

She did not explicitly name the developer, whose donations and praise she has received over the years, and whose wedding she attended in 2005. The former secretary of state jabbed openly at Mr. Rubio, who was part of the “Gang of Eight” Republican and Democratic senators who crafted a comprehensive immigration reform bill in 2013, which would have included a pathway to citizenship. Mr. Rubio has backed away from that last provision on the campaign trail.

“Not a single Republican candidate, not one, clearly and consistently supports a real path to citizenship,” she said. “Now you know, Senator Rubio actually helped write the 2013 immigration bill. Now he renounces it. They’re all moving toward the extreme.”

Ms. Clinton herself voted for a fence on the country’s southern border in 2006 while serving as the junior senator from New York. However, in her speech today she vowed to continue President Barack Obama’s so-far failed legal effort to uphold his executive orders to create a path to citizenship to some five million undocumented immigrants.

“If you work hard, if you love this country, if you contribute to it, and want nothing more than to build a good future for yourselves and your children, we should give you a way to come forward and become a citizen. And you know what, the majority of Americans agree,” she said.

Mr. Rubio and Mr. Trump’s campaigns did not immediately respond to requests for comment.

Hecklers twice interrupted the former First Lady’s speech, first to object to her appearance at an event co-sponsored by JP Morgan Chase, which has holdings in companies which run private prisons. A second outburst drew attention to her support for the North American Free Trade Agreement during her husband’s presidency, which the protester claimed had devastated Central America.

Ms. Clinton’s rivals in the Democratic primary, Vermont Sen. Bernie Sanders and former Maryland Gov. Martin O’Malley, are due to speak at the NIIC in the next two days. 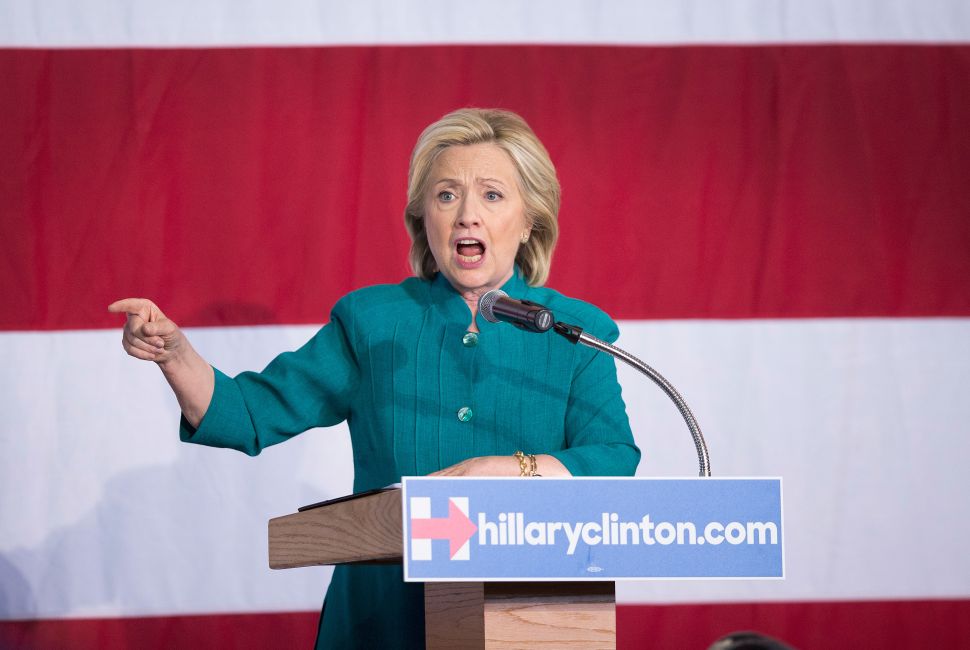