Just recently, I finished directing a music video on the streets of New York. I didn’t get a permit for this activity for several reasons. First, the budget for my film was equal to one day of Craft service for Kevin James. Also, I believe the permit people look deeply into your background. And I’m pretty sure the bench warrant they have on me is still in effect. Anyway, my small superb crew and I pulled off a good little flick, featuring Tom Lucas, an excellent pop songwriter. As a sort of public service (alright, part of my plea deal), I kept notes of the shoot, just in case anyone wants to know how to film in Manhattan illegally, using little money, and, in my case, even less common sense.

9:16 a.m. Mott Street: My brilliant cinematographer, Matt Clements, suggests we do our first scene on this lively, colorful street. It seems like a great idea as we set up. Then, a terrible idea, when we realize that Mott Street is hosting the annual Mack Truck Convention, Weenie Roast and Beer Blast. At 9 a.m., Tom was perfectly positioned with his guitar. Now I think he’s just been crushed by a Semi belonging to Wo Hop’s Dumpling Emporium. I’m sure Tom is dead. So bummed. I had a beautiful shot planned. Worse? Tom hasn’t paid me yet.

10:15 a.m. Duane Street: Tom’s alive. I react accordingly. Before the next truck actually clips him, I ask for a deposit. No cops have yet stopped us from filming. I find myself vaguely insulted by this. Gorgeous stage actress, Chris Campbell, joins us to shoot her scene. In it Chris whispers suggestively in Tom’s ear and they walk off together. We get the scene in one take. Tom, however, insists on 12 more takes. I’m suspicious of his motives, but he’s the one paying. Time passes. Lots of time. In fact, children from earlier scenes, once in strollers, are now on their way to grade school. Entire buildings have been erected downtown. After 10 years of abstinence, I begin smoking again. Musicians!

2:05 p.m. Waverly Place: We’re filming a scene with Rock giant, Richard Barone. He’s the sweetest guy around, with no ego. Although, he does keep insisting we refer to him as “The Pope Of Greenwich Village.” In his scene, Richard’s supposed to come up to Tom, use the ruse of taking a selfie with Tom, then steal his guitar. Richard is great in every take, funny and animated. Still, I’m skeptical when he insists on “One last take.” I’m supposed to say that! We do the shot. Richard grabs Tom’s guitar, runs off…and keeps on going. I give chase and finally tackle Richard at the Henry Hudson Parkway. As punishment, I make him imitate the Voicebox solo on Bon Jovi’s “Livin’ On A Prayer” in front of 30 New Yorkers. No one can agree who’s been punished more, Richard or the audience.

3:27 p.m. Astor Place: Matt, a fine filmmaker as well as cinematographer, asks me what I’m doing. I wonder why. Until Tom points out I’m looking through the wrong end of the camera. I say to everyone, “Don’t you recognize an avant-garde director when you see one?!” This silences everyone, but I still see terror in their eyes. I’m supposed to be in charge and feel I’ve been revealed as the congenital idiot that I am. For the first time, I understand how voters felt after they re-elected George W. Bush. I press on.

4:45 p.m. The Bowery: It seems like we’ve set up the camera 50 times today. Everyone grumbles about “killing the writer.” I agree loudly. Until I remember: I’m the writer. For this series of shots, we place Tom on various islands in the middle of the busy Bowery. Tom mimes his guitar solo wonderfully. He gives me an especially good expression of anxiety at one point. I chalk it up to great directing. Tom later tells me, it was due to a gypsy cab that nearly ran him down.

8:45 p.m. Houston Street: Last shot of the day. I keep hoping cops will stop us, ask to see my permit and shut us down. I’d incorporate this into the film, giving it a cinema verite feel. But nothing attracts the police. Even when I tell one I’m the head of the local chapter of the Black Lives Matter movement. Matt sets up his camera. I like the angle. Everyone is exhausted. Can we finish this sucker today?

9:11 p.m. Houston Street. Success! Maybe it’s because (at my request) Richard Barone has shown up again and eyes Tom’s guitar. And Tom, terrified, does his last shot, perfectly, in one take. It’s what Stanislavksi calls “motivation.” Thanks Richard. You’re a good musician. You’re also one hell of an actor. 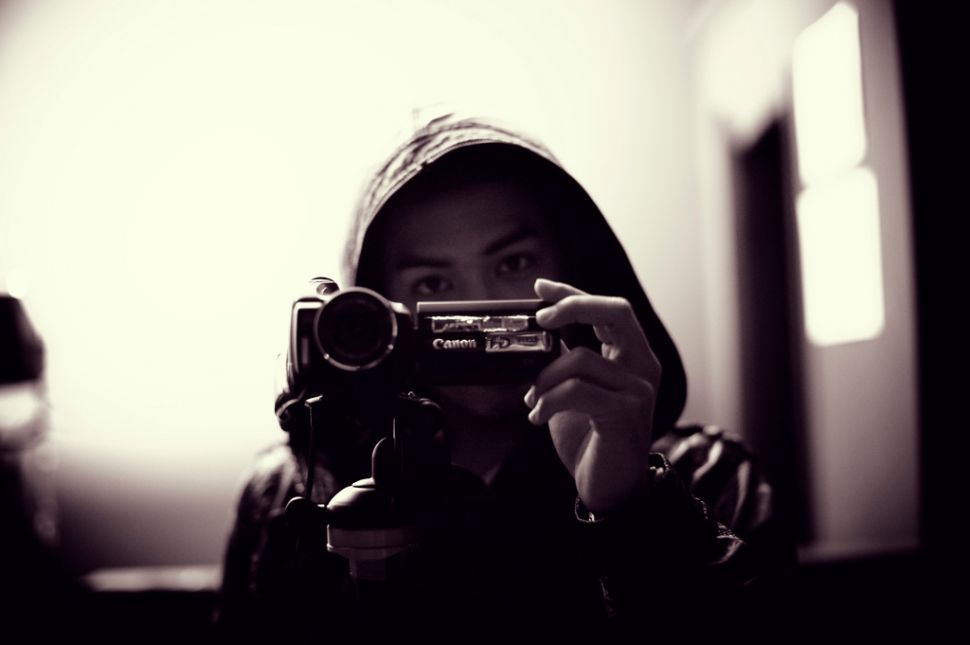