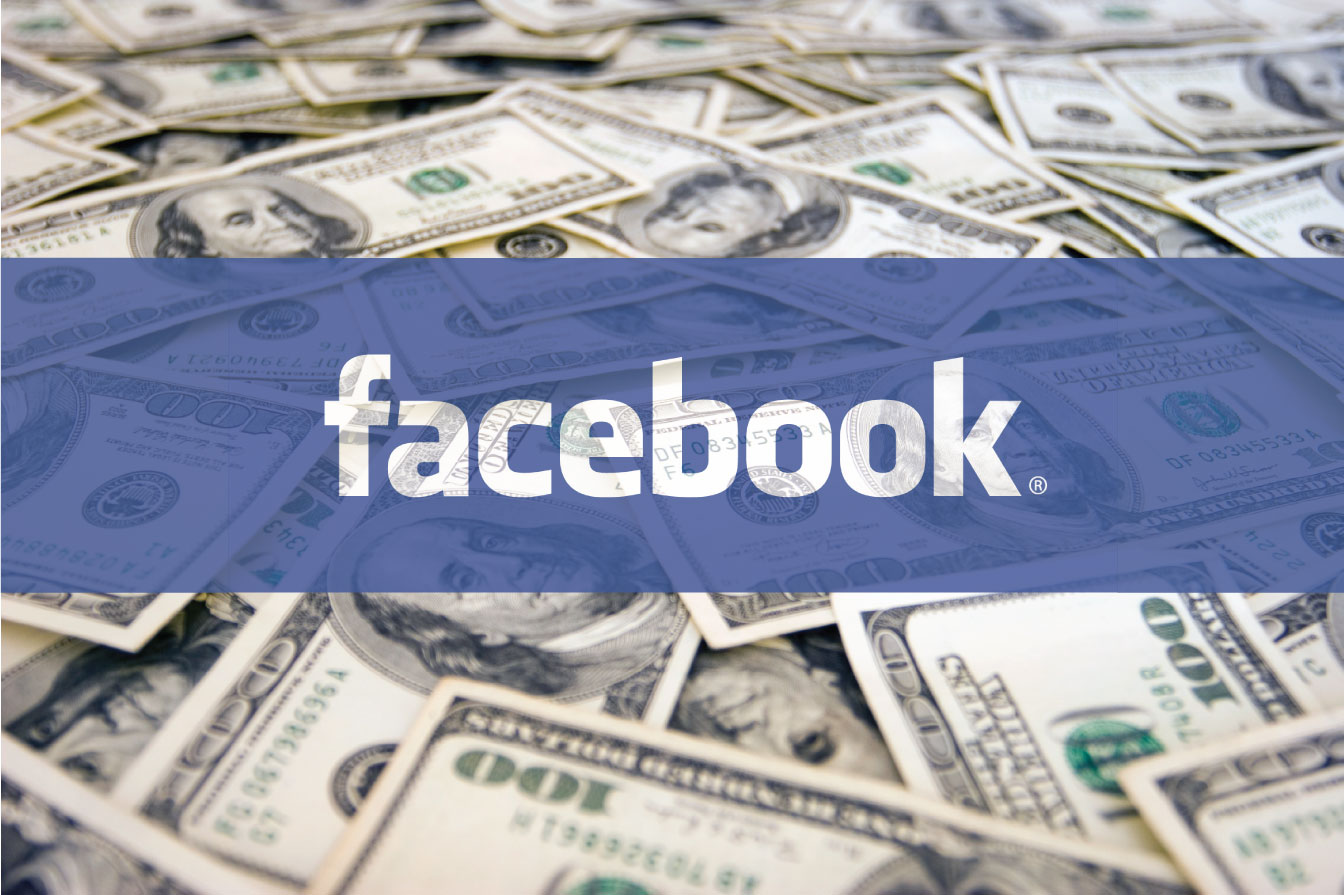 Facebook launched two things this month that were received very differently by financial markets and media. If you understand why, you will become a fiercer founder and might even make some money trading stocks.

Headlines called Product A a KILLER. CNBC said it stole over $200 million in value from another company overnight. (I think it’s about as threatening as a tapeworm.)

Product B is a rinky-dink throwaway that hasn’t, as best I can tell, been mentioned anywhere. (I think it’s the monster under your bed.)

We’ll call Product A an ice cube: nice to have, keeps your beer cold, but melts quickly from your memory. We’ll call Product B an iceberg: pivotal, foundational, and hopefully permanent — even if you can’t quite see it all.

This is idiotic terminology, but more people share articles when you write with an MBA stick up your ass.

Yelp stock fell 10% — $220 million off its market cap, its largest decline in more than four months. In a day of broad market gains, let’s pretend at least some of the fall is this news.

Facebook’s ambitions in local are common knowledge, so we must assume it was already baked into Yelp’s outlook. How, then, did Yelp’s long-term prospects change today? Did Facebook launch “The Big One”?

Let’s test this launch against other icebergs I’ve worked on at Facebook:

But FPS has zero social context whatsoever. There is nothing “Facebooky” about it, even in cases where there could be. For instance, according to its Facebook Page, 126 of my friends have been to The Tipsy Pig in San Francisco, and 22 of them liked it enough to Like it:

One friend even liked the Tipsy Pig enough to review it, which will probably be the topic of my next post:

But according to FPS, the most interesting thing about the joint is that a stranger named Giullian Leiete hated the bartender’s ponytail:

Maybe this is just a stunning oversight. Maybe 12,000 Facebook employees have been secretly dogfooding FPS as a Yelp killer for months, and none of them had the epiphany: “dude — should we build Facebook into this?”

2. Icebergs skate where the puck is going.

This is the problem with MBA metaphors: Eventually you end up with ice-skating icebergs.

But if you’re trying to capture a fresh market — especially one as notoriously slow-moving as local — you take time to paint the 2.0, not lipstick the 1.0. That’s why Facebook stopped vying for e-mail and went all-in on messaging.

So, for starters: If this product were an iceberg, it would be surprising for Facebook to launch it on desktop in 2015. Heck, Facebook would probably build a VR version nowadays before it would build for desktop.

Beyond that, there’s nothing unique about FPS, no evidence that anyone ever said “What if…?” No playfulness. No experimentation. Its entire design and featureset is clearly ripped from this little-known Facebook Places website.

The only way to get to this standalone “Services” website is by guessing that some text is actually a link. Maybe that’s because Facebook is putting the finishing touches on the YELP KILLER 9000 before blasting it out to billions.

4. Icebergs are built for people!

In short, if you believe that FPS is a killer response to Yelp, you have to believe that top user experience brains at 1 Hacker Way got together and had this convo:

Q: What’s the best way to find a good restaurant when you’re on the road?

A: Drive back home and type in “http://www.facebook.com/services.’’ We’ll show you a random list of nearby restaurants without any social context. If you can’t find anything in the neighborhood, we’ll send you off to random restaurants in Jakarta and São Paulo.

If this were really Facebook’s best shot at a Yelp killer, Yelp’s stock should’ve gone up.

It’s more likely that FPS isn’t designed for you; it’s designed for you. The dense links to unrelated content. The pretty URLs. The huge signup call-to-action for non-users. The total lack of core product integration. The fact that it’s powered by the same template as another SEO play, the Facebook Places Directory.

To be sure, SEO is an important source of traffic. But it doesn’t represent anew existential threat to Yelp in a world where its other major competitor is already Google itself. It’s like shaving 10% off $GOOG for Facebook People Directory.

Now let’s take a look at the redheaded stepchild, Product B. 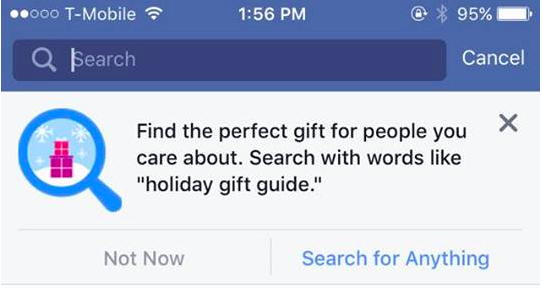 Yeah, that’s it. Just a little announcement when you tap Facebook’s search box that recommends looking for a holiday gift. I can’t find mention of it anywhere on the Web. But here’s why it’s interesting to me:

2. It follows a year of intense, smart, and creative experimentation in this area. This isn’t a lark. If you’ve been paying attention, you’ve been noticing more and more public content/search/trend features popping up all over Facebook this year. A little indicator here, a little bar there. Some helpful suggestions. Not much to look at on their own, but together they add up to a coherent product experience that is deeply integrated into the core.

The world’s premiere people mover said: “hold on there sport, have you tried a commercial search? Search for anything.”

Maybe it’s not as sexy as a standalone website. But damnit, that’s news!

How to Get Away with Murder

From the day I started working on product, people have made mountains out of mole hills and mole hills out of mountains. I’d bet that Facebook’s top product leadership has thought a lot about search and trends, but wasn’t even aware that a team was launching a standalone “Yelp Killer” website. In other words, I’d bet the energy that products A & B are getting outside the company is perfectly inverted inside.

I could be wrong. Maybe there’s a 300-person organization over there with their own sushi restaurant and a ten-year roadmap for a standalone services website, and they’re laughing at how widely I’ve missed the mark. But I’m guessing the internal reaction is:

Because anyone who builds products at scale already knows the secret: Professional assassins don’t introduce themselves. Whatever the popular myth, Foo doesn’t crush Bar merely by relaunching it to grander fanfare; it tinkers quietly for years, experimenting with novel and native ways to do things that steal from Bar a visit here, a visit there. One day, a data scientist at Bar is grabbing coffee when she notices a trivial — almost imperceptible — dip in a graph that for as long as anyone can remember has gone up and to the right.

Facebook is probably going to kill Yelp. It’s probably not going to do it with a website called Welp. But when W goes from Will to Walmart after a decade, sleep with one eye open. That’s how you get iced.

Blake Ross cofounded Firefox and was a Director of Product at Facebook for six years. Read more of his writing at blakeross.com or on Twitter @blakeross. 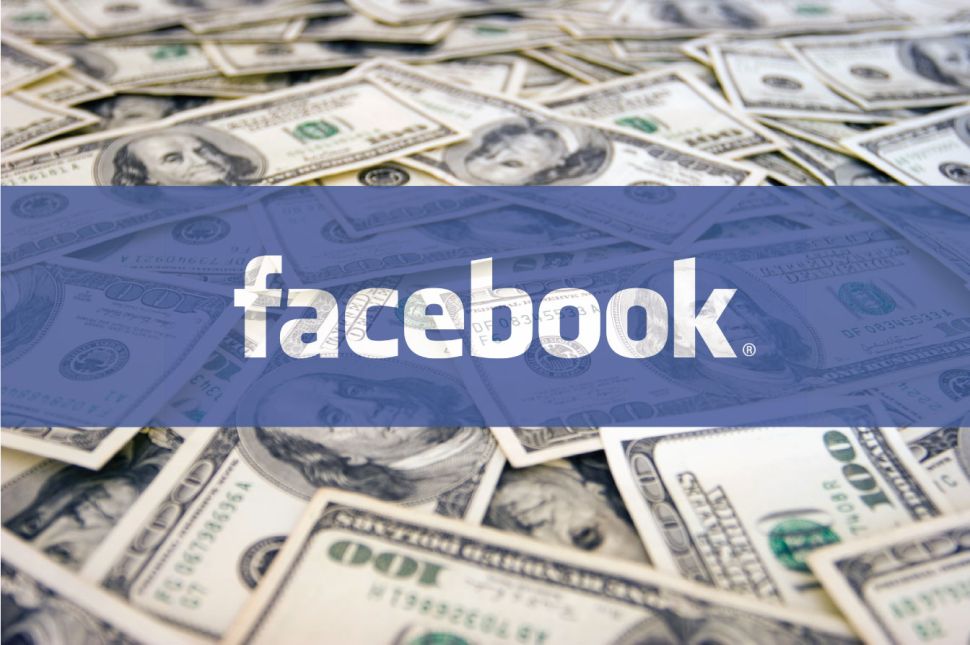