When I worked on Time magazine years ago, editors who weren’t satisfied with stories that writers had written would order up “new versions,” known as “NVs.” Over the years, I have been exposed to several art museum new versions of Germany and/or Berlin during the Weimar Republic. The latest—and (misguidedly) cheeriest—of these NVs is “Berlin Metropolis: 1918-1933” at the Neue Galerie (through January 4, 2016).

If you believe this version of Berlin in the 1920s, as organized by Dr. Olaf Peters, the city was just another big, happy, bustling modern metropolis, not unlike New York during what Americans referred as “the Roaring ’20s.”

Of course, Berlin was chockablock with talent, especially movie-makers and architects. The movie-makers are evidenced here by little screens showing videos of the most famous movies from the period, plus posters for some of the biggest hits.

And for the architects, we have a whole gallery with photographs, plans, drawings and models of the ultramodern skyscrapers, movie palaces and housing developments designed and even built in Berlin by the likes of Walter Gropius, Mies van der Rohe, & Erich Mendelsohn.

This architectural gallery is so world-of-tomorrow that you wonder whether everybody in it was so taken up with their beautiful dreams that they ignored the fragile economy which had begun the period with runaway inflation and would pitch it into depression a full year before the 1929 crash on Wall Street.

Those beautiful dreamers also seem to have ignored the fatal flaws in the constitution of Germany’s first democracy: its proportional representation ensured the election of so many little middle-of-the-road parties to the Reichstag that none could form an independent government, and cabinets rose and fell too fast.

Thus voters became disenchanted with them, opening the way for the National Socialists (Nazis) to become the largest party in the Reichstag in 1932, the last free election in Weimar—ensuring the accession of Adolf Hitler to power, and the abolition of Weimar itself.

This exhibition has a few political posters—attacking or defending the Communists near the beginning, and promoting the National Socialists near the end—but it doesn’t explain why about a third of the electorate voted for the Nazis in 1932.

One possible clue – though of course Dr. Peters didn’t intend it that way—is the gallery devoted to “Die Neue Frau”—“the new woman.”

The teeny-tiny shoes of these women, delicate but elegant stockings and jewelry, plus two of their costumes (both roomy enough to fit Valkyries) are offered as intriguing counterpoint to a painting by Christian Schad showing two very chic & educated-looking women pleasuring themselves and a devastatingly excellent row of semi-abstract paintings and collages by the dadaist Hannah Höch.

We in New York also had emancipated women. They cut their hair, abandoned corsets, voted, worked in offices, smoked, drank and maybe even made love like men—but they were cheerfully called “flappers” and as nearly as I can tell, men took them more or less in stride.

On the other hand, Hitler’s platform targeted Die Neue Frau. He demanded that women go back to devoting themselves to Kinder, Kűche, Kirche. If this was a way of luring voters, then maybe Die Neue Frau was not as widely accepted as all that.

What about the rest of Hitler’s platform, including its anti-Semitism and its virulent homophobia—what was there about Weimar Berlin that made these issues into selling points? “Glitter and Doom: German Portraits from the 1920s,” which played the Met nine years ago, answered these questions better.

In this otherwise fine show, there is little evidence that Weimar had any political or economic problems or any controversial social situations.

You don’t get much evidence that Berlin in the 1920s was an HQ of the homosexual underground, or that poverty-stricken widows of men killed in The Great War were turning tricks out of desperation.

Only one image suggests these unhappy widows—by Max Beckmann, in his magnificent portfolio of 11 lithographs, “Trip to Berlin” (1922).

The same image reveals the presence of crippled veterans, and another image in the portfolio chronicles a strip tease.

It’s one of the few indications of the glory of Berlin night life in the 20s in this exhibition. Another is a movie poster for The Blue Angel, starring the incomparable Dietrich as Lola, the sultry chanteuse who drives that fusty professor, Emil Jannings, around the bend.

But let me not linger on the shortcomings—as there are other good things to see.

This is especially true if you like collages, drawings and photographs—though there are good paintings, too.

The best ensemble of both works on papers and paintings is in the densely-hung gallery on the second-floor dedicated to the early republic (although the celebrated photographs from the radio tower by Laszlo Moholy-Nagy are incongruously upstairs, in the sparser third-floor gallery otherwise devoted to the advent of Hitler).

Most of the work on paper in the second-floor gallery is outstanding in formal quality and iconographic bite. This includes the Beckmann portfolio and several trenchant images by George Grosz.

Grosz was another one of the few artists to indicate dissatisfaction with the status quo, particularly in a harrowing drawing showing a skeleton being accepted for military service in the waning days of the war.

Similarly satirical though not quite as accomplished are works by Georg Scholz & Karl Hubboch. Besides Höch, two other dadaists contribute collages here: John Heartfield & Raoul Hausmann.

We have a reconstruction of the assemblage combining a pig’s head with a soldier’s uniform that graced the First International Dada Fair held in Berlin in 1920.

Finally, in this same gallery we get a handsome row of paintings, with work by Lovis Corinth, Karl Hofer, & Rudolf Schlichter. The Schlichter is the standout: a moody portrait of Geza von Cziffra, Austro-Hungarian moviemaker.

However, the painting, which somehow manages to convey the vigor, variety and excitement of Weimar Berlin best—even though it was created before the fact—is I and the City (1913) by Ludwig Meidner. 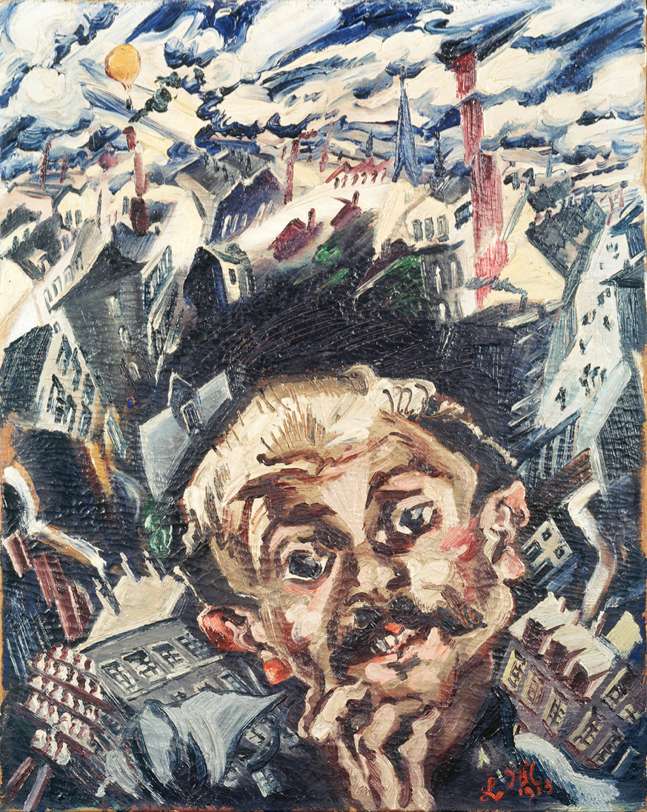