On the first Monday of December, a wide-eyed Joanna Newsom walks onstage at Brooklyn’s Kings Theatre and sits down at her pedal harp. Gently commanding the recently reopened, palatial space—a 1929 marvel in the French Baroque style—Ms. Newsom plucks the opening notes to “Bridges and Balloons,” and lulls the sold-out, 3,000-plus audience into rapt meditation.

“We sailed away on a winter’s day, with fate as malleable as clay. But ships are fallible, I say, and the nautical, like all things, fades,” begins the first song off of her 2004 debut, The Milk Eyed Mender.

Like all of Ms. Newsom’s work, “Bridges and Balloons” sounds both specific and vague, placed at the beginning of her set as an invocation of seasonal feeling but nonetheless open-ended in its metaphor of seafaring prophecy. In just over 10 years, Ms. Newsom managed to elevate her inimitable style of anachronistic compositions to the realm of high art—Baroque Classical arrangements morph with ease into the sounds of vaudeville, ragtime and other ephemeral Americana; her whimsical, seemingly childlike voice paints scenes of wondrous, naive discovery at any moment, only to conjure pointed allusions to history, literature or metaphysics the next. No sooner than Ms. Newsom’s music gets dense and didactic does she push the breaks to align with her listeners and reflect, the bard in awe of the very complexities she presents. As such, Ms. Newsom’s ability to simultaneously compose songs so intricate yet deliver them so simply is her greatest hat-trick—occupying a place of impeccably crafted logic and ambiguous, all-encompassing meanings often in the same breath.

Ms. Newsom’s ability to simultaneously compose songs so intricate yet deliver them so simply is her greatest hat-trick—occupying a place of impeccably crafted logic and ambiguous, all-encompassing meanings often in the same breath.

On this year’s interstellar Divers, Ms. Newsom expands her gifts into an immaculately arranged meditation on time and space, personal history and communal memory. Presented this Monday as an opener to the set, “Bridges and Balloons” evokes a sort of theme on Divers, the idea time and space are both oceans, to be valued for their vastness and harnessed on a quest for spiritual transcendence. Ms. Newsom is the captain on this quest, while her harp, piano and voice collectively form the vessel. But where seafarers historically search for land, gold, oil or white whales, Ms. Newsom quests only for light.

Next heads into the opening song on Divers, “Anecdotes,” and lays this quest out before us. Ms. Newsom maintains a mythic omnipresence for her vast ambitions here, tempered by her honest feelings of loss over life’s fleeting epiphanies. “All along the road, the lights stream by, I want to go where the dew won’t dry,” she tells the audience. “I want to go where the light won’t bend—far as the eye may reach—nor end.” As an opening statement, “Anecdotes” is direct in its grandeur. Presented in such a space, though, with gods and muses adorning the walls in gilded gold leaf, the song becomes literature.

Please temper any assumptions that a gathering of music fans in such a venue, listening to such music is in any way a meaningless indulgence of the privileged bourgeoisie. Because between Ms. Newsom’s heady explorations of time and space, glimpses of her personality poke through with genuine warmth and feeling, as asides and audience banter. She has a strong sense of humor, a knack for self-deprecating barbs that don’t deflate the wisdom in her songs so much as give that wisdom a human, earthly face. “No, you’re OCD!” she playfully quips to the audience after taking a beat to adjust the seat at her harp. Later in the set she rationalizes not tuning it. “You guys seem chill, you won’t mind me not tuning this thing?” she asks. “There are a lot of strings, and each is out of tune in its own special way.” While her bandmate Ryan Francesconi takes a moment to tune, she sweetly pokes fun at him, “You’re tuning? Square.”

These breaths make the most poignant moments in Ms. Newsom’s set all the more arresting. Take the title track of Divers, for instance, a highlight of hushed reverence that begins with a dulcet arpeggio on her harp. “The diver is my love, and I am his, if I am not deceived,” she sings, “Who takes one breath above for every hour below the sea.” Ms. Newsom enunciates every word in earnest when she sings as a character in love with a pearl hunter, and you can’t even hear a whisper from the room; her understated delivery turns serenity to power.

Please temper any assumptions that a gathering of music fans in such a venue, listening to such music is in any way a meaningless indulgence of the privileged bourgeoisie.

Although analyses of the promotional media surrounding any album is typically pointless, the deliberate roll-out of music videos for Divers feels worth mentioning. Veteran indie auteur P.T. Anderson directed both the clip for Divers‘ title track and the clip for “Sapokonikan”; premiering for a week exclusively in movie theaters, the “Divers” clip features close-ups of Ms. Newsom superimposed over the album’s stunning, cloud-saturated cover design by Kim Keever, a former thermal engineer for NASA.

Like fellow director and mutual fan of the superimposed shot David Lynch, Mr. Anderson also happens to practice a technique called Transcendental Meditation, which to my knowledge resonates as a sort of metaphysical Buddhism. Founded by Indian guru Maharishi Mahesh Yogi in the ’50s, the spiritual practice teaches self-realization and harmony through mantra meditation, urging practitioners to going deep inside themselves in pursuit of inner peace.

In the films of Mr. Lynch and Mr. Anderson,  the subconscious thoughts and feelings of characters often play out visually, as is most certainly the case in Mr. Anderson’s Inherent Vice. In it, Ms. Newsom plays the narrator and comic reprieve, a wise hippie chick who facilitates the film’s wisdom and, dare I say, transcendence. Whether or not she counts herself among the well-adjusted throng who practice Transcendental Meditation, the foundations of such a practice are nonetheless thematically embedded in Divers. Some point out how the album’s last track cuts off midway through the word “trans—,” while “Anecdotes” begins with the word “sending.” Such is the case for Divers as an endless loop of transcendence.

Ms. Newsom refers to those fans as “delvers.”  Maybe delvers are distinct from divers in that the delvers analyze, search and assess, while the divers just jump right in, allowing themselves to be engulfed by the lucid majesty of our universe. There may be deeper wisdom here, but Ms. Newsom isn’t telling—Divers never presents its ideas in a cloying or dogmatic style, and therein lies its Zen.

Consider Kings Theatre’s history as a vaudeville venue for a moment. Just as Ms. Newsom’s music repurposes old, storied genres of music and applies them to modern storytelling, Kings received renewed life since  reopening last February, renovated and relevant again for the first time since it closed in ’77. That both she and the space have baroque leanings, too, feels noteworthy.

When Ms. Newsom starts into the honkeytonk rag of new song “Sapokonikan,”  the audience welcomes the  notes like an old friend. The song’s showmanlike, vaudeville affectations fuse profoundly to the theatre, a perfect marriage between scene and space. Named for an old Native American tobacco trading post located at what is now Greenwich Village, “Sapokonikan” looks at history as a living, embedded, ever-present force. “And the records they left are cryptic at best, lost in obsolescence,” Ms. Newsom sings, “The text will not yield, nor x-ray reveal, with any fluorescence, where the hand of the master begins and ends.”  Maintaining such a perspective on history illuminates the patterns and meaning of struggle and hardship, whether such reverence was achieved through spiritual practice or not.

In fact, all of the Divers songs blend well in the set among her classics. Sandwiched between the epic, pastoral “Emily” and the sprawling, shifting meters of “Have One on Me,” the relatively compact new track “Waltz of the 101st Lightborne” could easily have sounded incidental and flighty. Yet Ms. Newsom and her band do justice to the tune’s powerful arrangements.

Maintaining such a perspective on history illuminates the patterns and meaning of struggle and hardship, whether or not such reverence was achieved through spiritual practice.

Though she’s described it as a science fiction story, the song’s lyrics speak volumes about the idea of a modern, restored theatre for music in the middle of Brooklyn’s working-class Flatbush neighborhood. Her delvers have surmised that “Waltz” is a story of time-travel, of a solider who joins a futuristic infantry unit but leaves his lover behind. “As the day is long, so the well runs dry, and we came to see Time is taller than Space is wide,” she sings. “And we bade goodbye, to the Great Divide: found unlimited simulacreage to colonize!”

All apropos allusions to Pynchon and Wells aside, these words resonate more to me as a comment on the nature of cities, specifically New York (which she refers to explicitly at various points on Divers). The idea that this city makes carbon copies of places in the pursuit of colonization is a gentler, more “meta” view on gentrification, which Ms. Newsom cleverly weaves into her larger narrative with a daft artfulness.

When she comes out for the encore alone and sits at her harp, Ms. Newsom asks the audience if she should play an old song or a new song. The loudest fan screams “Sawdust and Diamonds!” off her dense, Van Dyke Parks-arranged Ys. “What if I actually played that?” she teases ruefully, pausing for a moment to entertain the idea of jumping into the 10-minute epic of harp calisthenics. Most artists stick to a song fresh in their minds for the encore, something they’ve played recently and can conjure relatively simply. But hopefully you know by now that Ms. Newsom is not most artists.

As she dives into “Sawdust and Diamonds,” Ms. Newsom’s fingers blur together in a cluster of celestial polyrhythms and her voice becomes the bell she’s singing about. “And the articulation in our elbows and knees makes us buckle as we couple in endless increase,” she muses, “as the audience admires.” Not merely content with transcending space and time, Ms. Newsom attains that which only the rare artist values—a state of being present and aware. As such, her songs themselves become the very unbent light she seeks. 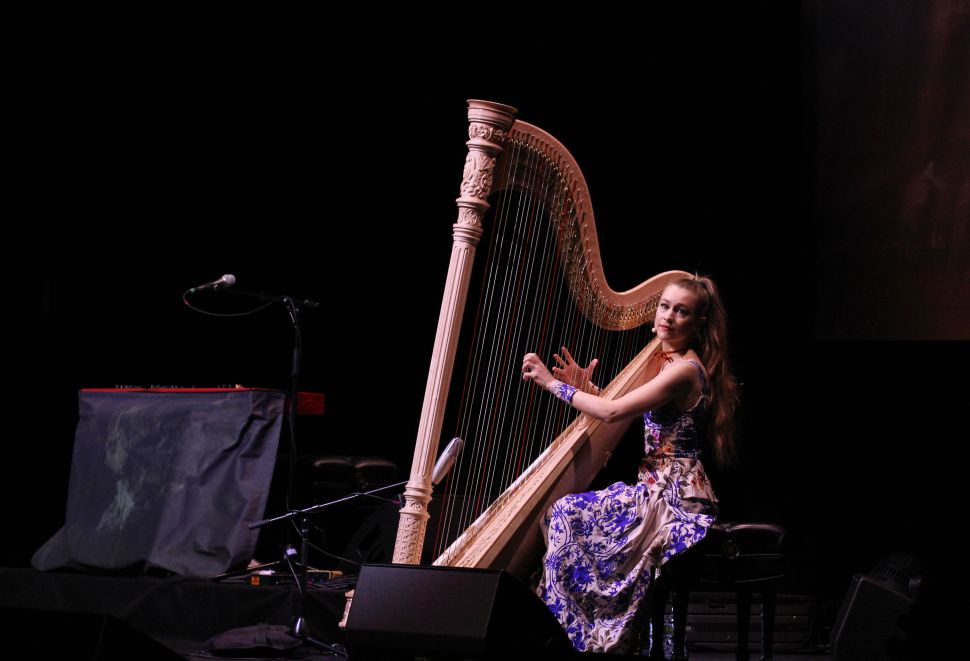