Ramsey Nasser can now look at maps on his Kindle Touch. He has them running in a way that the device was never meant to run, but that’s because he believes the Kindle has so much unrealized potential. Maps was the first step in his larger mission to bend the device to the hacking community’s will, rather than the capitalist profit imperative. “The maps were definitely the jumping off point,” Mr. Nasser told the Observer in a phone call.

“I can’t buy into the iOS / Android hyperconsumer capitalist world,” he said, explaining why he’s stuck to dumb mobiles in a smartphone world. “The whole thing makes me feel gross.” He went on to say that companies like Apple, Google, Samsung and Microsoft are at war with the idea that the devices we buy should belong to us and that we should really be able to do with them whatever we want.

The Kindle is an e-ink device that has been primarily designed for reading, with its unique display exhibiting the same optical properties of paper. While it has disrupted publishing, Jeff Bezos’ empire has locked hackers out of experimenting with the applications it could enable. Only one smartphone feature made him jealous: the ability to carry a worldwide map in their pocket. So, Mr. Nasser decided to put them on his Kindle.

The 2012 Eyebeam fellow spent a year fighting the device to let him build a browser that could operate it. “The reason it took a year,” he explained, “was because it meant basically writing a web browser, in C, built on top of WebKit.” WebKit makes all the big browsers run. It’s not small.

The MobileRead community made it easy to jailbreak his Kindle, but to get to the point where he could demonstrate what he meant to do with the project, he had to work with existing software loaded onto Kindles for its experimental browser. It got him far enough that he was able to show a room full of tech art fans what he had in mind in Manhattan this past Sunday (at an event organized by another Eyebeam fellow), which was the first time he showed off the project in public. He’s currently calling it “ReKindle.”

Amazon debuted the Kindle in 2007. The original Kindle line uses e-ink, which allows particles to turn from light grey to black with one small electrical charge. Once they shift, they stay that way. It doesn’t take any energy for the last images displayed on a Kindle to persist, which is a difference in kind from LED screens, which go blank the moment power is lost. It is technology that the general public still poorly understands (any time someone uses the phrase, “I don’t like reading on screens,” that person doesn’t understand e-ink).

“There’s only a half dozen companies that make e-ink products,” Mr. Nasser said, “and those companies have no relationship to the hacker community.”

Beyond Kindles and Pebble watches, e-ink hasn’t caught on and the general public doesn’t really understand it. “I think the complexity of the technology has a way of constraining the company making it,” Mr. Nasser guessed, but he thinks it’s great. “I think the tradeoff of refresh rate and color is such a fair trade off for effectively infinite battery life.”

For now, Mr. Nasser expects another year of work so that the ReKindle really works with an operating system built basically as a browser, in HTML and Javascript. Then he wants to focus on documenting everything he did, so that others can learn what he learned about the hack and reproduce it. Once that’s sorted, he expects a community will arise around it. He’s seen it happen with his other projects before.

He can already foresee some simple uses for a persistent, extremely low power mobile device, such as loading airline and event tickets onto it that are scannable on the same sort of readers that scan paper. He knows that other creative developers will see applications he would never come up with, though.

“What does a low power, persistent, hackable operating system look like?” he asked. “This is a hack I want to put in people’s hands and we will all figure out what this means. And then we begin designing this experience for ourselves.” 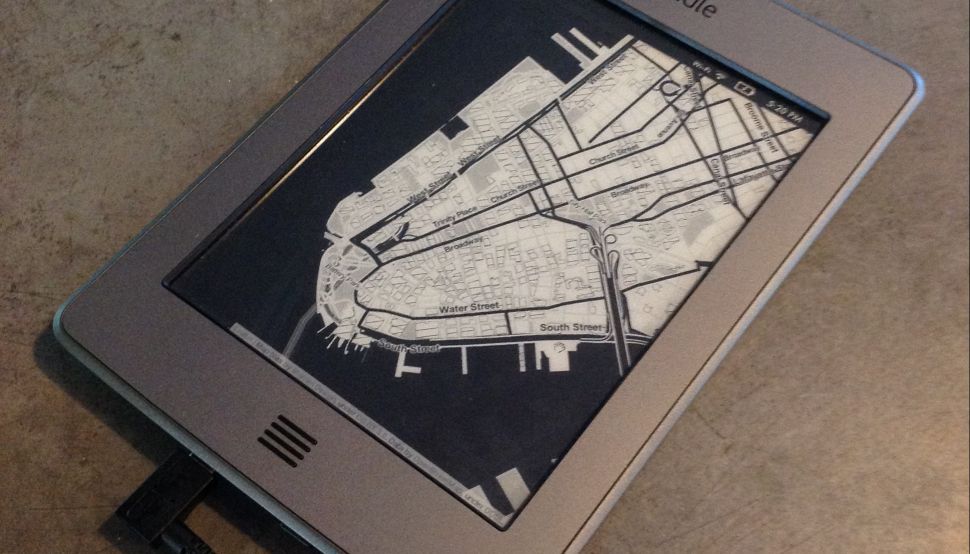