Sweeney at the statehouse Thursday

Sweeney addressed that criticism, saying that his amendment would not prevent future administrations or legislatures from making changes to the pension system.

Sweeney said the quarterly payments, which were calculated based on an assumed three percent growth in tax revenue, would save the state $13 billion over 30 years in earned investment income. The amendment would oblige the state to pay $650 million more than the governor’s proposed $2.4 billion dollar payment, a sum that Sweeney described as reasonable.

“Three percent is not a hard number to hit,” said Sweeney. “It was a hard number to hit here because of the economic policies of this administration, which have done nothing but starve this state’s economy. But since the nation is doing better, we’re following along.

“What I’m more worried about when there’s no money to make the pension payments, and then all of a sudden we’re saying we need billions of dollars at once to start paying the bills.”

After trumpeting the failed legislative fix he sponsored with Senate Republican Leader Tom Kean in 2011, Sweeney took a shot at Christie when he accused the governor’s caucus of eroding workers’ quality of life with reforms that amount to wholesale cuts. Preempting objections from Republicans, Sweeney noted that he has faced blowback from his labor supporters because of his role in bipartisan pension reform and willingness to compromise on the millionaire’s tax.

“We did those reforms,” Sweeney said of Republicans’ call for action on the public fund. “Unless you want to take benefits completely away from workers and give them really garbage benefits.”

The amendment would require two simple majority votes in the Senate, and would then go to voters as a ballot question in 2016. Asked whether voters would balk at the amendments place on a ticket already crowded with ballot questions on casino expansion from Atlantic City and raising the gas tax, Sweeney said he was unconcerned.

“It is really hard to press a button, isn’t it,” he said, laughing. 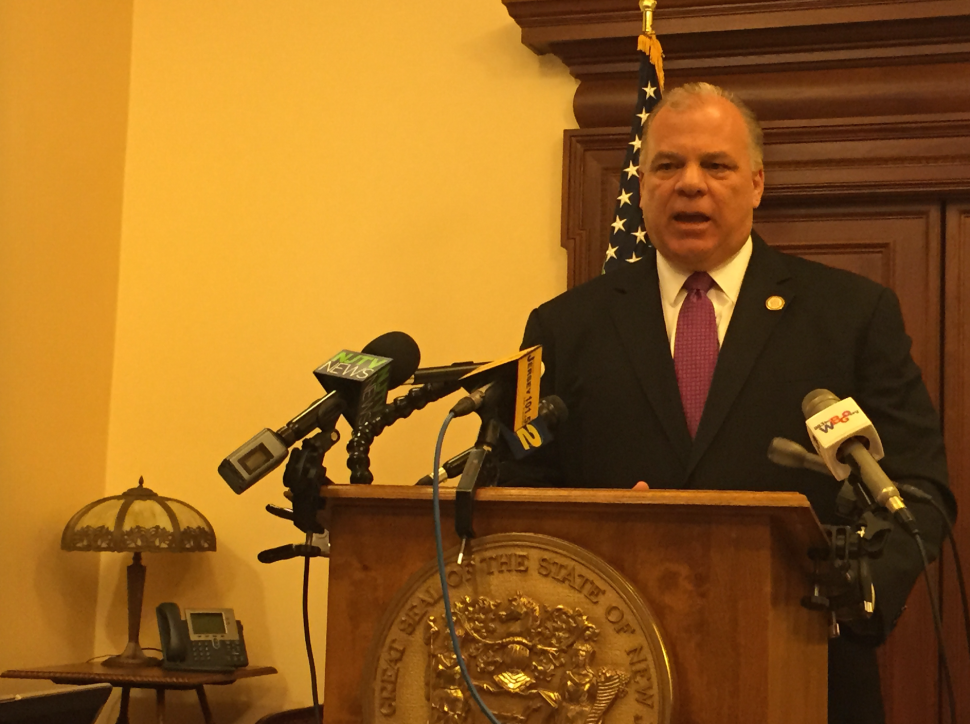