I passed one of the last tombstone stores on the Lower East Side on my way to Lowlife. It was December 1, the day after Assemblyman Sheldon Silver’s ignominy was ratified by a jury of his peers. A life on the Lower East Side laid low. Fittingly, the sign above the shuttered store read: S. Silver Monuments. Smiling, I wondered if, when Shelly walked this block, as I’m sure he did, he grinned or grimaced at his own mortality.

Later on down Stanton, around the corner from the half-sunk scattered visage of Wylie Dufresne’s wd-50, where the empires of fading shades like Jason Neroni and Iacopo Falai and the many chefs before them have been fully effaced, is a new restaurant called Lowlife by a chef named Alex Leonard and his partner Hugh Crickmore. Lowlife presents at least one approach to handling impermanence.

In kitchens as in life, there’s a sense of unease at the futility of holding onto anything. In response, some chefs grasp to a culinary tradition—could be French, could by Malaysian—that gives them a connection to something solid, or at least foreign. Some chefs go anarchic and schizoid; others go gimmicky; some are just plain lazy; others go ape for technique, loco for local or just crawl into the past. The endless iterations of bistros have, of course, as much to do with the need for a connection to the past as they do with the délices of steak frites.

Haven’t you ever wondered, as the server listed farms with poetic names like Whispering Fart and Belching Meadows from nearby locales, to what end this almost neurotic recitation serves? It seems not unrelated to obsessions with authenticity, the importation of far-flung and arcane product and the faithful reproduction of specialties to which we would have no point of comparison to begin with. There is a difference between grasping at something and holding it lightly in one’s palm.

There’s a dish at Mr. Leonard’s new restaurant, which takes its name both from Luc Sante’s 1991 chronicle of crime in these self-same city blocks a century before and a New Order album from 1985, that he calls borscht ($12). It is unlike any other borscht and yet still indisputably borscht. It comes in a deep ceramic bowl and consists of three-ish ingredients: a scoop of roasted beet, a strip of fresh cream and a pointillist cloud of smoked trout roe. In none of the three does Mr. Leonard really force himself. The beets are roasted in olive oil and some herbs, then tossed with fish sauce and sherry vinegar and pureed. The raw cream is cultured in-house and quenelled to order. And the trout roe cling together like Nickelodeon Floam.

It’s not anything like the borscht my ancestors would have eaten when they lived in these tenements or worked in the factories like the one in which this 70-seat restaurant is housed. And it’s not anything like any borscht anywhere else. Russ & Daughters this is not. Rather, it is like word association with the past. That can go terribly wrong if the mind that flies is faulty, but Mr. Leonard—who began his career as a 15-year-old apprentice in Chicago’s Le Vichyssoise with Bernard Cretier and chased that with stellar runs at Daniel and Blanca, where he rose to become chef de cuisine—has teased from his surroundings keywords with which he builds his prose.

In the case of borscht, that old Eastern European soul food, he preserves the rapport between earthy beets and the tart richness of sour cream that has warmed shtetl bellies but has added the lightly smoked roe in lieu of meat or carrots or something—who knows? Eating roe is the culinary equivalent of popping bubble wrap, a viscerally pleasurable act. That it has no bearing on tradition isn’t something that matters.

Mr. Leonard isn’t aggressive about his technique or bombastic about innovation. He plates lightly, treads lightly, and his team of six chefs cook lightly. There are only ten offerings on the menu (the wine list, curated by Dhrubo Mazumdar, is much longer) and yet each of them quietly carries at least one brilliant touch. Whether it’s that Mr. Leonard ages the morsel of fluke as it appears with hackleback caviar and coriander ($16), finishing off the bowl in which it arrives with a spritz of charcoal oil, wiped off, so as only to leave an enchanting aroma. Or if it is the shrimp salt he adds to a mad red cloud of lamb tartare ($18), flecked with mint. There’s roasted pine nut milk poured over his herring and sardine, which yank the fishy flavors from the sea back to land. In the best of the mid-sized dishes, he bibbidi-bobiddi-boos guinea hen ($20) into a mousse, ballotines it in its own crispy skin and bops it on top with a tart bread sauce of house-made yogurt and day-old sourdough bread.

As with many of the best young chefs, Leonard—like his confreres at Contra and Wildair—is happiest when tripping on acid. This is true in the bread sauce of the hen dish as it is with the cream in the borscht. He knows from culture.

Much has been written of his $54 chicken—a slowly grown Sasso he brines, roasts and finishes on Binchotan charcoal—and the bird is good, no dispute. But if you’re a Yakitori fan, you’ve tasted these delicate flavors before. But there’s another dish, the tilefish, which deserves praise. The fish seared on one side only so its skin becomes chip-like while its flesh remains soft. Leonard lays it out with a fan of green sorrel dressed in house-made vinaigrette. And hidden by the leaves of the sorrel is a colony of mussels, poached in their own juice. What a thrill to uncover them. None of the preparations are new; none of the ingredients are unknown. But the result is monumental.

Leonard’s is vision that asks us to always look closer with a wide open mind. How much of this one gets seems maybe immaterial. The menu doesn’t talk much, and the servers, though lovely, don’t over-explain. Mr. Leonard described the place to me as seasonal and local, but I would say those are sort of house rules. The game he is playing, though, is different altogether; Mr. Leonard’s work isn’t about finding new things but looking at things newly. The confidence with which he renders the known unknown , reminds us that which we thought we had a handle on, we never really grasped.

There are three pieces of art in the barely lit bathroom: a signed poster from a 1975 Joseph Beuys show; a photograph of Neal Cassady and Timothy Leary taken on Ken Kesey’s bus by Allen Ginsberg, whose scrawl is legible along the bottom; and a triptych by Jonas Mekas. These seem not unrelated to the borscht or to the tilefish or to Mr. Leonard’s general project or to impermanence. In the lowlight it’s easy to overlook Lowlife, but the brilliance is there once your eyes adjust, and the lessons are there too: Each moment is precious. Nothing should be overlooked. And, most importantly, wash your hands before returning to work. 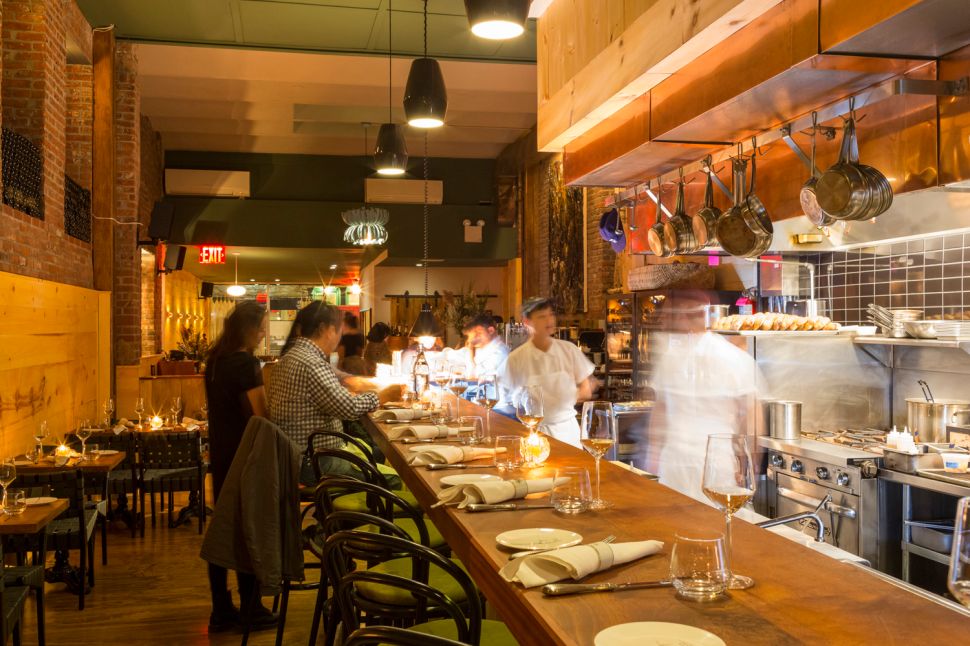