In what might be the most unexpected collaboration of 2015, Louis Vuitton has tapped a video game character to star in their latest set of ads. First revealed on creative director Nicolas Ghesquière’s Instagram, Lightning is the star of these Spring/Summer 2016 images. For those who spend more time watching runway shows than playing with game consoles, Lightning is a heroine of the Final Fantasy franchise.

Reality and fantasy become one : lightning a genuine heroine in the new @louisvuitton series 4 ad campaign

While we’d bet that most of the Louis Vuitton clientele is not quite familiar with the video game, in some ways this pairing makes a lot of sense. Mr. Ghesquière noted that his Spring/Summer collection was inspired by the intersection of our lives online and our real lives. He also included references to anime, sci-fi movies and Minecraft in the visual-heavy show.

He told Dazed Digital: “I was thinking about this digital frontier, which I wanted to combine in harmony with the world of Louis Vuitton – the craft, the wardrobe. It’s an evocation of cyber, of what comes from digital – these characters or girls that are speaking to their generation.”

With an “it” bag grasped in her hand, Lightning is definitely speaking to the digital generation in the Series 4 campaign. The images were created through a collaboration with Square Enix, the developer of Final Fantasy, and character designer Tetsuya Nomura. In the images she dons clothing right off the runway, including a sheer ruffled shirt with a lattice detail and a pair of teeny silk shorts. With a mane of pink hair, Lightning is reminiscent of another Vuitton muse: Fernanda Ly, the model who was the unequivocal star of the brand’s Fall/Winter 2015 runway show.

It does look like Mr. Ghesquière has also tapped a real girl for these images as well. Just this morning he Instagrammed a shot, photographed by Juergen Teller, of the Korean actress Doona Bae dressed in Spring/Summer 2016. This must be the balance between digital and real life that the designer was talking about. 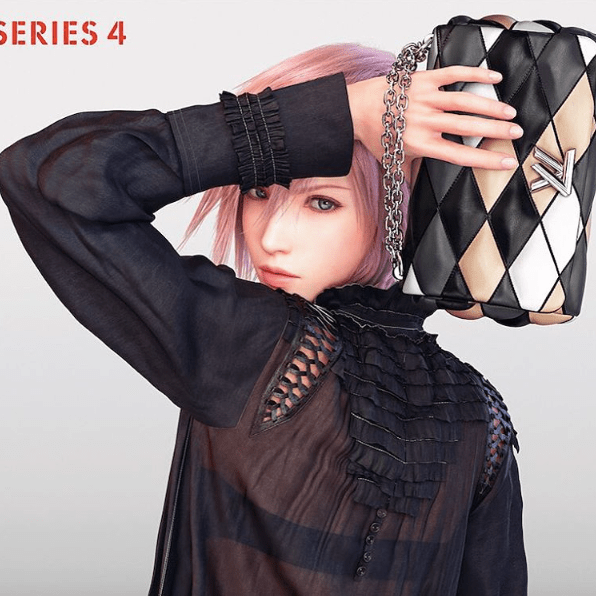