In Crossing Brooklyn Ferry, Walt Whitman’s stirring ode to shared experience across generations, he used the ties between Brooklyn and Lower Manhattan to celebrate New York and illustrate the idea of interconnected destiny.

The intertwined and complimentary destinies of Lower Manhattan and Brooklyn are not only the stuff of poetry. Two of the City’s oldest neighborhoods are now now thriving as homes to its newest industries, creating a map to New York’s future prosperity.

The symbiotic relationship each downtown enjoys with the other is rooted in commerce, commuting and common economic goals.

Right now, Lower Manhattan and Downtown Brooklyn are experiencing significant growth and parallel transitions, redefining themselves and what it means to be a business district.

Downtown Brooklyn is now its own important economic center for New York City.

Lower Manhattan is increasingly known as a popular “live/work” community with a growing residential population and roster of shops, restaurants, parks and cultural attractions. $30 billion in public and private investment is ushering a profound set of changes and positioning the area for tremendous employment growth in the years ahead. As the new home to Time, Conde Nast, Harper Collins, McGraw Hill, Group M, Droga5, Vox Media and a score of other media and advertising firms, Lower Manhattan is no longer just a financial services center—it’s New York’s new capital of content and home to an extraordinary mix of emerging industries.

It also serves as a major employment center for workers from all over New York City and beyond. While 23 percent of Lower Manhattan’s private and public sector workforce live in Manhattan, another 47 percent live in the other four boroughs. Employment data shows that Lower Manhattan workers come not only from every borough, but from every neighborhood across Brooklyn.

Significant numbers of Lower Manhattan workers are found throughout the borough—from nearby Brooklyn Heights and Park Slope to Downtown Brooklyn and other areas including Bay Ridge and East Flatbush. There is an average of 3,529 people commuting to Lower Manhattan from each of Brooklyn’s 18 Census Bureau-designated areas (these Census-designated areas in New York City approximate New York City’s Community Districts and recognized neighborhood names).

Downtown Brooklyn is now its own important economic center for New York City. The area boasts a business district with more than 17 million square feet of office space, a historic and vibrant shopping center, a burgeoning residential community, 11 higher education institutions, the Brooklyn Cultural District, Barclays Center and its two professional sports franchises, exceptional public transportation and vibrant open spaces. $6.3 billion in private investment spread over 88 construction projects has fueled Downtown Brooklyn’s tremendous growth over the past decade—which is expected to continue, with 37 projects and $4 billion in private investment now in the pipeline, and the economic impact of the booming Tech Triangle expected to reach $11 billion by 2020.

Over the 160 years since Mr. Whitman penned “Crossing Brooklyn Ferry” these two neighborhoods have grown ever more connected. The connections are both literal—NY Waterway’s East River Ferry, multiple subway lines and bus routes—and evolutionary, with changes marked by the growth of our residential communities, the diversification of our industrial bases and a level of dynamism, on both sides of the river, that makes clear that Downtown is truly where the action is.

In his poem, Mr. Whitman exhorts cities to “thrive.” He understands that generations on each side of the East River depend on an array of common experiences, goals and hopes for their sustenance and sense of selves.  Today, we think Mr. Whitman would recognize how these new versions of Manhattan and Brooklyn, interdependent and reinforcing of each other’s success, embody the raucous, healthy connected future he celebrated for us so long ago. 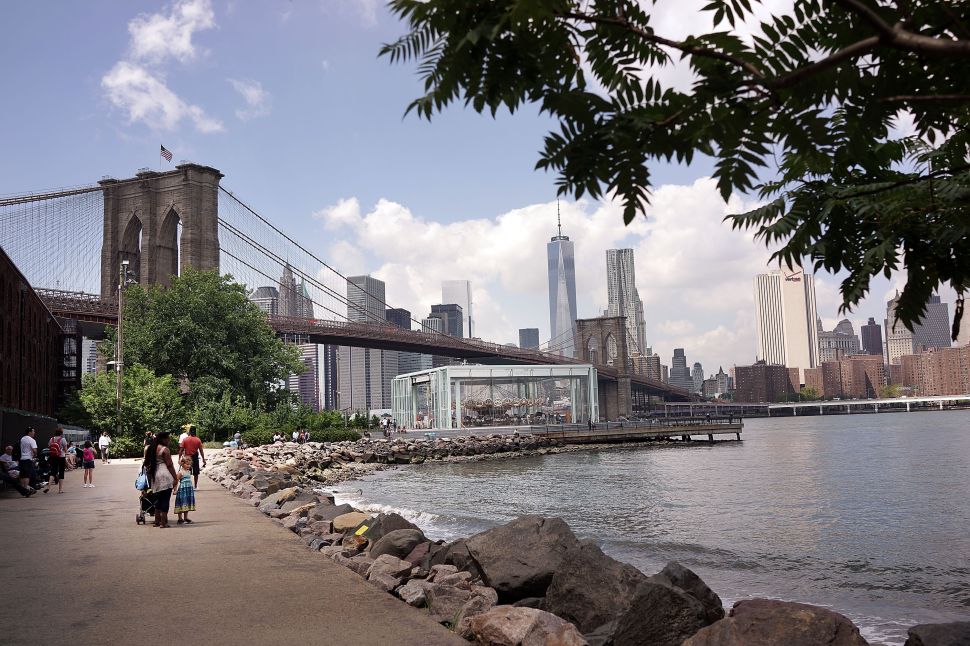