“I’m contractually obligated to make a toast tonight so shout out to that,” Mark Anthony Green said at Naked Taco in Miami Beach during an Art Basel dinner he was co-hosting with rapper A$AP Rocky. “There’s a lot of beautiful people tonight so shout out to that. And this one right here,” he said pointing to his rapper co-host, “was late today because he had to buy the perfect shirt.” The night marked the crescendo of Mr. Green’s Basel-related events hosted at the Dream Hotel. Bookended by the opening reception of his latest artistic exhibit “Suite 010” on Tuesday and a Basel Tov rooftop pool party on Sunday, this week was the perfect ending to a big year for the newly minted GQ Style Guy.

“My favorite thing about Basel is that it’s at the end of the year, so it feels like you bust your ass and try to compete and showcase among everybody and then the year’s over,” Mr. Green told the Observer via phone days before the JBL and Heineken-sponsored dinner where he hosted Kylie Jenner, Lilly Collins, Dev Hynes, Ian Connor and more. “So it’s really like a championship.” For his showcase this year, the 27-year-old editor and artist created a multimedia exhibit of what he calls his best work yet.  With 100 bales of hay punctured with arrows labeled “Simon Don’t Shoot” in a reference that nods to the martyr Saint Sebastian, the childhood game of Simon Says and the darkness of this year’s police brutality, alongside a photo series and a selection of text-based works, it was an ambitious project.

“I really wanted photography to be a part of this, so I was thinking about artists that I’d like to shoot,” Mr. Green explained. “I thought about Misty Copeland [the first black principal dancer at the American Ballet Theater] because she’s inspirational to me. I thought about a few other visual artists but the moment I thought about A$AP Rocky [and] it just felt really right.” This year, the A$AP Mob member dropped a follow-up to his debut album with At.Long.Last.A$AP. “He is someone who doesn’t compromise and doesn’t conform. That means he may sell less records, but he makes what he wants to make, exactly the way he wants to make it and that’s very inspiring.” Because of that, Mr. Green shot exclusive photos of Rocky as a part of his seven-month preparation for Basel, which he unveiled on Friday.

For his own purposes, Mr. Green wanted this to be an end of year roundup. Amidst the flashy factor of Damien Hirst “Gone But Not Forgotten” gold mammoth statue’s unveiling at the Faena complex and vacuous celeb-studded parties, the Brooklyn resident took an opportunity to probe a little deeper. “You know Mark is a really humorous guy and he’ll crack a joke in a second, but people don’t know that he really and truly does care about people.” Warren Chancellor said before the dinner. Mr. Green dedicated the exhibit to Mr. Chancellor in his show notes where he playfully refers to his friend and business manager as a “grumpy cat.”

That caring nature and empathy crop up not only in the arrows, which Mr. Green explained to Dev Hynes, were meant to question “Who really has the power? Simon [from Simon Says] or the man with the gun?,” but also in some of the text-based monochromatic works that feature words like Don’t Shoot sewn on treated fabric.

Of course, fashion does play a role in the exhibit, which closed Sunday. “Simon Says Don’t Shoot” is joined by “RALPH LOR-en,” JOR-gee-oh ar-MAH-nee” and “EVE sahn LO-rahn” which represent phonetic spellings of Ralph Lauren, Giorgio Armani and Yves Saint Laurent, respectively. More than just being fashion references, Mr. Green explains that those works speak to a younger version of himself.

“I grew up looking at all these fashion designers and even when I was too young to know what I was talking about, I could tell you what piece came from which runway show, who the creative director was at the time and who the designer was.” Mr. Green said. “But I was having those conversations in a place where there was no one nurturing it, pre-internet.” The stylish artwork, created from sandpapered black, camel and red fabric are the editor’s attempt to go back to his younger self and belatedly teach him how to pronounce the names of the designers he idolized. Those are the same designers that he works with nowadays as a function of his role at GQ.

Mr. Green made quite the splash earlier this year when he was named as GQ’s new Style Guy, following the departure of Glenn O’Brien, who created the role and had held it for 15 years. The announcement didn’t come without criticism, as some called out the associate editor for being too young. Prior to being hired at Maxim as editor-at-large, Mr. O’Brien came off slightly combative in a Four Pins interview where he said Mr. Green might be better labeled the Style Intern.

“Anyone who really knows me, knows that negativity and going back and forth is not who I am and that’s never been a game that I’ve played,” Mr. Green said when the conversation turned to those comments. “I grew up reading Glenn O’Brien’s column. I learned a lot from his column just like every guy did and I’m super grateful that he did it. I’ll be the first to say I didn’t earn Style Guy. I do think I’m going to do a great job at it, but I didn’t earn it so right now I’m trying to earn it retroactively.”

For the future that means experimentation, convenience and making the column less precious, sort of like his art, which Mr. Green touched, rubbed and grabbed when walking through the exhibit (guests were encouraged to do the same). At one point, he pulled an arrow from a bale of hay and used it as a pointer for the rest of the tour.

“The important thing right now is figuring out what Style Guy is going to be in 2016, 2017, 2030 and 2040,” he explained. “Every time I do something, I log it to figure out how successful it was. It’s not always about clicks, it’s about how impactful it was and how good it was. I’ll be the first to say that I think writing in questions and emailing them is ineffective. Email is too slow of a system. There are certain questions that are more timeless and it’s heavier, and we put that in the magazine, but most guys need a really quick response.” For that sort of feedback this new iteration of Style Guy offers advice on social media.

A tactic that already has been proven to perform well? “Our Reddit AMA was one of the most successful things that have happened since I’ve become Style Guy,” Mr. Green said. “I was on there for hours, non-stop with questions; I probably answered more in that AMA than in six or seven years worth of columns. That really made me look at it and think, ‘Is this what Style Guy should be?’”

But on Friday night, Mr. Green put the fashion aside for a dinner of 40 to celebrate an amazing year. Though he was wearing a fairly precious teal mohair cardigan for the event, with a finger food-focused menu of chicken vallarta tacos, steak fajitas and cinnamon dusted churros as well as a “Barefoot” themed rooftop after party organized by Miami nightlife fixture YesJulz (while the rain sprinkled down overhead off and on), there wasn’t a less precious party of the week. 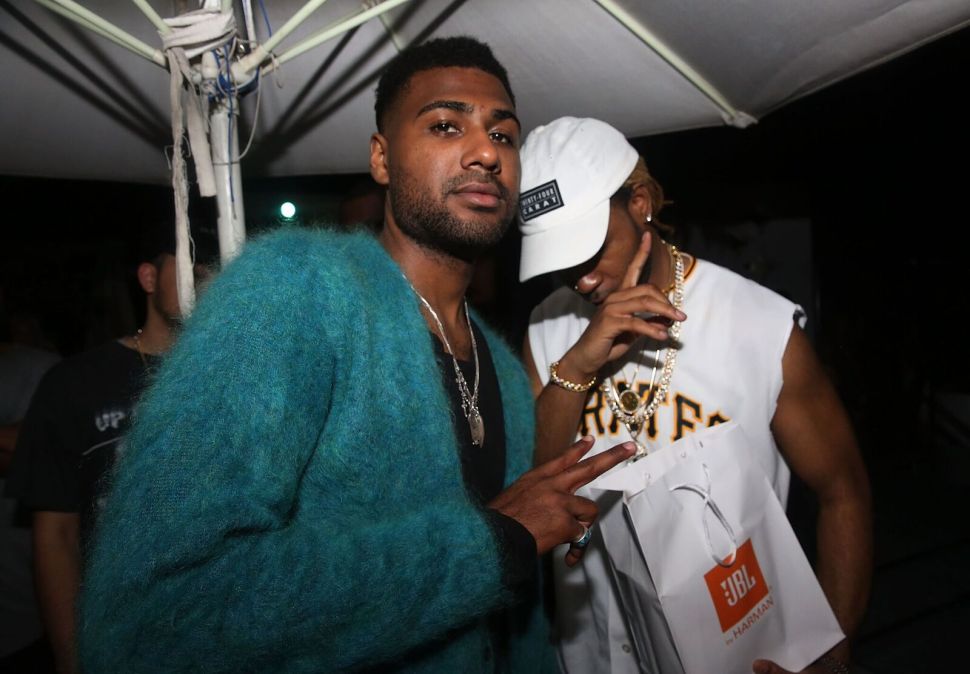