F train platform, Bergen St. Station—As I’m writing this, I’m watching MTA workers paint the third rail as onlookers cringe. “Isn’t that the one that’s supposed to electrocute you?” a woman asks, peering—in my opinion—dangerously close to the platform’s edge.

The MTA worker waves her off: “Back up…mind the gap.” Of course, she doesn’t take a step backward. “There isn’t a train coming,” she sneers. “You’re here.”

I don’t understand how we’ve gotten to this point, where New Yorkers are more scared of Pizza Rat than the possibility of falling from a platform and getting electrocuted…or worse.

Many New Yorkers seem to enjoy standing as close as possible to the platform edge, spitting, stamping their feet and craning their neck out as far as it can go in some bizarre ritual of possible sacrifice to the great gods of Delayed Service. We might as well be moonwalking on the lip of an active volcano.

If you take a look at the most dangerous platforms in the city—Times Square and Union Square rank particularly perilous, according to a 2013 MTA report—you’ll notice they share a couple things in common. One is that they are major hubs for foot traffic. But the second point is the one that makes my legs go to jelly every time I swipe my yellow card: both Times Square and many lines at Union Square feature ill-conceived staircases that descend into the middle of the platform, forcing those in transit to negotiate a thin, foot-long strip of walkspace directly next to the tracks. In this tight space, with zero room to maneuver and even less for human error, you’ll have tourists with large suitcases stopped dead in the center, waiting for the next train, forcing you to practically spelunk your way to the next available car. Or you’ll be waiting for the local, and will find yourself battling waves of freshly expelled straphangers exiting the express while you attempt to hold your ground.

Broadway and Lafayette. Jay Street Metrotech. Penn Station. Grand Central. Out of what criminally deranged mind were you born? Who thought it would be a great idea to force commuters to compete, Hunger Games-style, for those precious few feet of platform? Between January and the end of May this year, 74 people were struck by subway trains—up 20 percent from the previous year.

Yet, there’s hope! Not that you won’t fall onto the track and get hit by a speeding subway car, but that you’ll survive: despite the increase in incidents, there was a 25 percent decrease in fatalities from the year before. Call it dumb luck or credit the MTA for handing out those bloody Metrocards two years ago to raise awareness about track safety. Me? I prefer to believe that New Yorkers, like Pizza Rat, have learned to adapt to the danger. 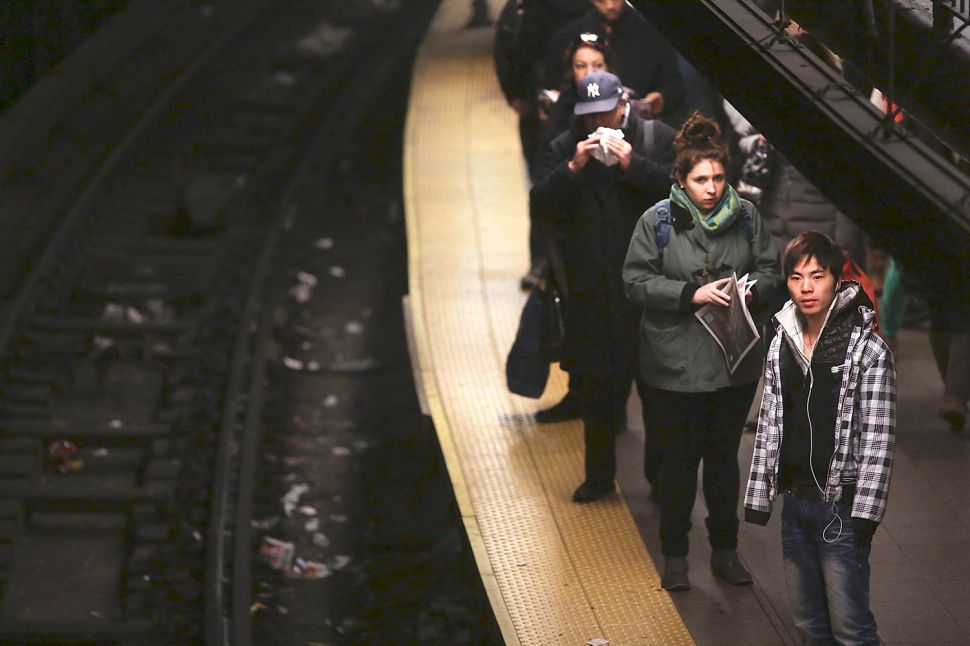