NADA Miami Beach, the annual fair run by the nonprofit New Art Dealers Alliance for emerging dealers, has finally settled into its a new home at the tony Fontainebleau hotel in Miami Beach. But, despite its refined surroundings the fair is scrappy as ever, and remains a go-to spot for finding the art world’s young blood if you’re willing to do some digging.

Visitors showed up in droves, first day sales were plentiful, and amid an overwhelming display of abstract painting, there were a handful of artists we predict are poised for breakout success.

Artist Ken Kagami had the most talked about artwork at Frieze London in October, where he drew caricatures of visitors’ genitals. At NADA, Mr. Kagami’s newest work was on view with Tokyo’s Misako & Rosen gallery, who were participating in their eighth year with the fair. On a table next to the gallery’s publications, was a small porcelain statue of a dog holding a sign from its mouth that read “Asshole” that immediately caught our eye, and the focus of nearly very passing visitor.

“We had it on the floor, but people kept kicking it,” dealer Jeffrey Rosen told the Observer.

Also by Mr. Kagami, a yellow bowl on a plinth filled with dog food made of bronze. (Not edible, just to be clear.) Both works were already sold for $3,800, and Mr. Rosen explained that interest in them began before the fair opened its doors. The dog-themed sculptures will be featured in Mr. Kagami’s next Tokyo show inspired by pet dogs, told from the perspective of a canine.

Mr. Kagami has shown at NADA before, in 2007 he created artwork for a performance by Deerhoof that featured his signature character Milk Man, also from the band’s album. He also does a regular comedy radio show with the gallery in Japanese, available for download on the gallery’s website, for which Mr. Rosen asked if we’d lend our voice for an introduction in English—we did.

“He has a very small but devoted audience, sometimes only four or five people will show up [to the live radio shows], but it’s not depressing,” he said.

Then, there was Zoe Pettijohn Schade and Pedro Wirtz at Kai Matsumiya. At the fair, colorful patterned gouache paintings by Ms. Schade lined the walls. A work titled Crowd of Crowds featured a layered cacophony of monkeys, gunmen, faces, and feathers, while another titled Dark Harbinger 2, was a swirl of hibiscus flowers, a shark, and crucifixes. On the floor, what appeared to be fried eggs on stones was in fact Brazilian-born artist Pedro Wirz’ sculpture Trilobytes.

Recently, the gallery has been focusing on large-scale projects and educational programming with its artists in an attempt to expand “what is the definition of a gallery,” dealer Kai Matsumiya said. Currently, Anwerp-based artist Phillip Metten has transformed the facade of the Stanton Street space into a monochromatic grey, geometric porthole sculpture. A miniature version of the facade is on view in the booth.

To make the paintings, Mr. Shani layers up to 15 layers of paint until he reaches the desired hued and texture, before drawing simple tableaus on top in white marker. The effect: the paintings appear to lightly glow. Mr. Rouchon explained the paintings nod to the cinematic style of film noir.

An artist book by Mr. Shani featured drawings in color that were more politically oriented, commenting on violence in the country, in a similar graphic style as the paintings.

And finally, Wendy White at Rawson Projects’ booth would win best booth installation hands down. Ms. White created a hanging light fixture (her first) that dangles over a puddle containing the words “WHAT A LET DOWN.” Dark grey, dripping cloud-shaped paintings hang on the booth’s peach walls (there’s also matching peach carpet), and small vinyl lettering near the floor repeats the Newport cigarettes logo “Pleasure!” The installation, which was made specifically for the fair, is based on the memory of a peach-colored sweatshirt she’d wanted in her teenage years.

In the lead up to the week’s extravaganza there was plenty of hype surround the move to the Fontainebleau, a more centrally located high profile venue which put the fair closer to competitors and condensed the layout into one ballroom from the three it occupied at the Deauville in previous years. Unfortunately, this may not be NADA’s final home, or at least we hope it’s not. The fair was tucked away in the back of the hotel and difficult to access from its sprawling lobbies—plus, space for exhibitors felt cramped. 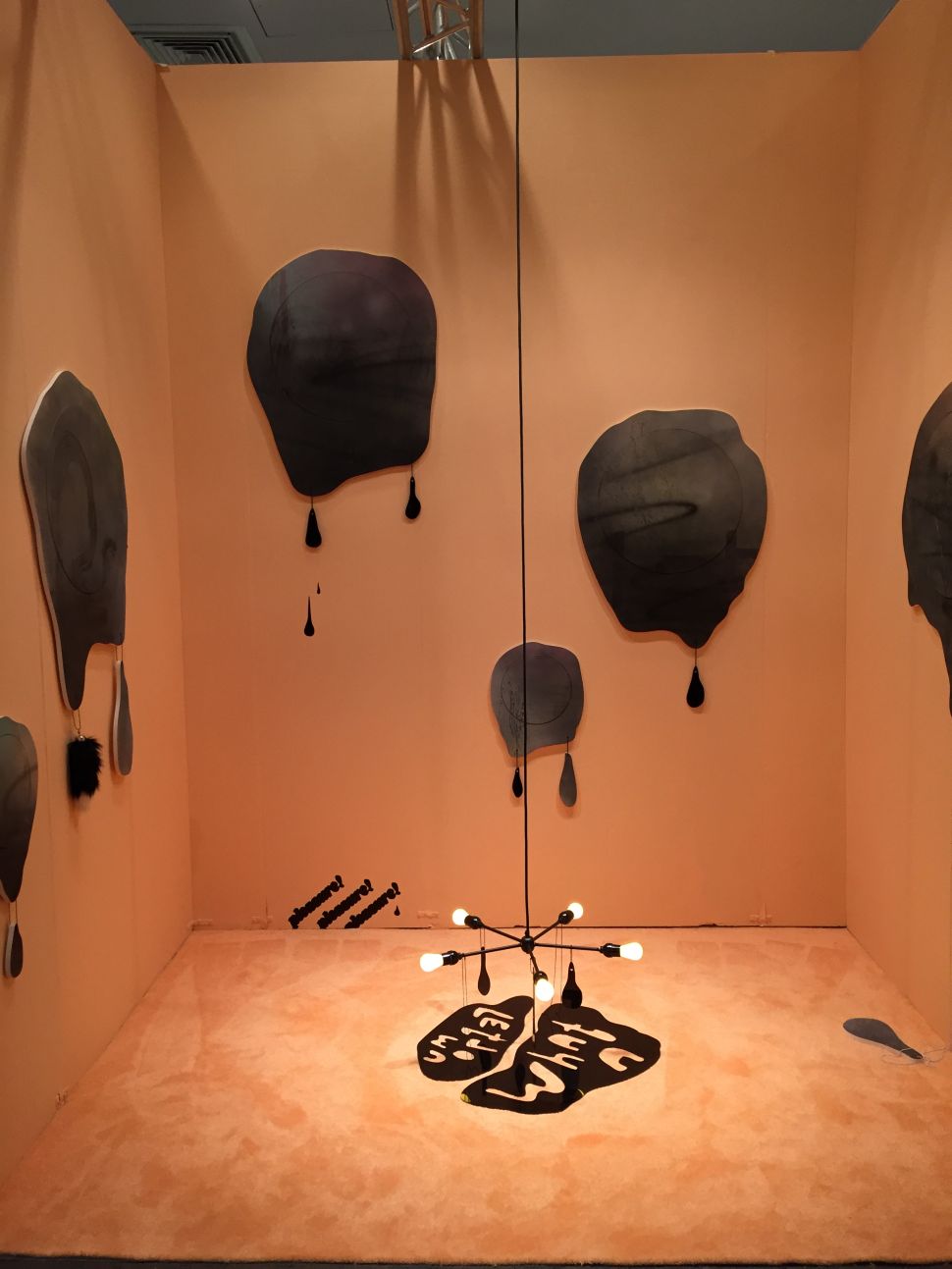