1. Marco Rubio: In a GOP debate night full of bluster, vagueness and awkward Jeb Bush stammering, the Florida senator shone with a sharpness and clarity of a diamond that somehow wound up in a presidential forum. He fended off attacks on his one weak point (with Republicans, at least) immigration, by highlighting his rivals’ inconsistencies on the issue. Then, yesterday, he netted endorsements from more than two dozen Republican and Conservative Party leaders from around the state.

The nomination could be his, so long as he can get one “yooge” obstacle out of his way and stops a certain Texas senator from cruising in to take its place.

2. Charles Schumer: New York’s senior senator is all grown up, and finally taking his place as a proper bete noire for Republicans. The GOP candidates could not stop name-dropping the Senate Democratic leader-to-be in the debate, accusing each other of siding with the Brooklynite on various issues. Mr. Schumer’s response: “I’m honored.”

3. Related Companies and Sterling Equities: Mayor Bill de Blasio turned his back on the developers of the proposed Willets Point makeover in Queens earlier this year when they wouldn’t agree to include more affordable housing in the project, and a court decided that the $3 billion facelift would usurp public park land. The mayor’s move seemed to leave the plan to turn the current neighborhood of corrugated iron chop shops into a sprawling, shiny new retail and residential complex more or less ready to be hauled off for scrap. But the state Court of Appeals agreed to hear their case, and the Council decided on Wednesday to defy the mayor and file an amicus brief in support of Related and Sterling’s case.

1. The de Blasio housing plan: As the year draws to a close, Mr. de Blasio seems nearer than ever to accomplishing his mission of becoming a punching bag for every major official in the city. Besides the Council’s insurrection over Willets Point, his vision for the city took a hit on Wednesday as Bronx Borough President Ruben Diaz Jr.—another potential primary challenger—and Queens Borough President Melinda Katz tore apart his proposal to rezone the city to obligate developers to build housing affordable for certain income brackets and eliminate a host of parking and height restrictions. Even Manhattan Borough President Gale Brewer, usually a de Blasio ally, couldn’t help getting in on the action by attacking the plan for wiping out rules tailored to specific neighborhoods.

The mayor tried to put some momentum behind his plan by having a host of clergy sign onto a letter of support, only to have opponents quickly conjure a list of religious leaders opposed to his proposals—a list that oddly included some of the same people who signed the first missive.

Meanwhile, time is swiftly draining away for organized labor and the real estate industry to come to an agreement on what prevailing wages will be written into the 421a tax abatement. If they fail to reach a deal, the exemption will expire on January 15. Development interests insist they cannot afford to build at all without 421a, and that they can’t pay union wages—but the Building and Construction Trades Council doesn’t seem to buy that, and launched a new ad campaign yesterday to promote their cause.

So Mr. de Blasio, who has so far sided with the industry, could find his zoning plans proving moot as new building comes to a halt 15 days into the new year.

2. The de Blasio homelessness team: Tuesday saw Department of Homeless Services Commissioner Gilbert Taylor bow out of the the mayor’s administration, making him the second de Blasio official to step down amid the explosion in street indigents. Speaking to the press in City Hall rotunda, Mr. de Blasio vowed a “comprehensive review” of the city’s efforts to bring down the homeless population.

By Thursday, apparently he had come up with a plan: Homeless Outreach and Mobile Engagement S‎treet Action Team, or HOME-STAT. Besides speedier responses from homeless services or the NYPD about a person on the street, the biggest component of HOME-STAT will be giving every single one of the 3,000-4,000 people living on city streets their own dedicated case worker.

The new initiative will also bring the city one step closer to attaching “-stat” to the end of all its program names.

3. The de Blasio MWBE recruitment effort: You know you’re unpopular when even your friends pick on you. Bertha Lewis— founder of the Black Institute, a leader in the Working Families Party and a one-time ally of the mayor—tore into the administration as “incompetent and immoral” for not contracting with more minority and women-owned business enterprises. To add injury to insult, she did it at a rally with two of the mayor’s rumored 2017 Democratic primary challengers: Comptroller Scott Stringer and Brooklyn Congressman Hakeem Jeffries, who have both jabbed Mr. de Blasio on the issue in the past.

The race for the presidency continued to play out just above the mayor’s head, while he struggled to keep things together at his own level. It’s been maybe the biggest storyline of the whole year, as Mr. de Blasio has aspired endlessly to the lofty stature of a national figure, but seemed unable to handle the problems sprouting up around his feet.

Mr. de Blasio settles down to a nice big Christmas dinner with Chirlane, Chiara and Dante—then gets down to turning his public approval rating around in time for 2017.

In one of the most unfortunate cases of political synchronicity in recent memory, Bronx Assemblyman Michael Blake’s new side job as a campaign consultant came out last Friday on the same day that former State Senate Majority Leader Dean Skelos got indicted for corruption. The freshman lawmaker—who had sold himself as a reformer—defended taking the gig at first, but reconsidered over the weekend.

Hillary Clinton, Bernie Sanders and Martin O’Malley somehow manage to bring the same feeling of a barfight about to break out to the Democratic debate that the Republicans brought to their last forum. 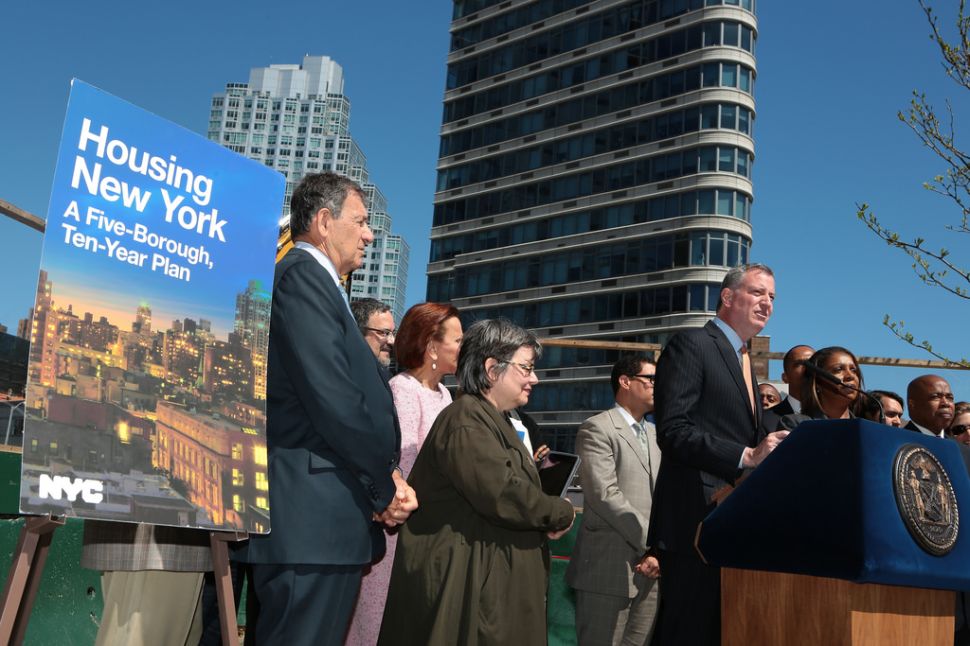