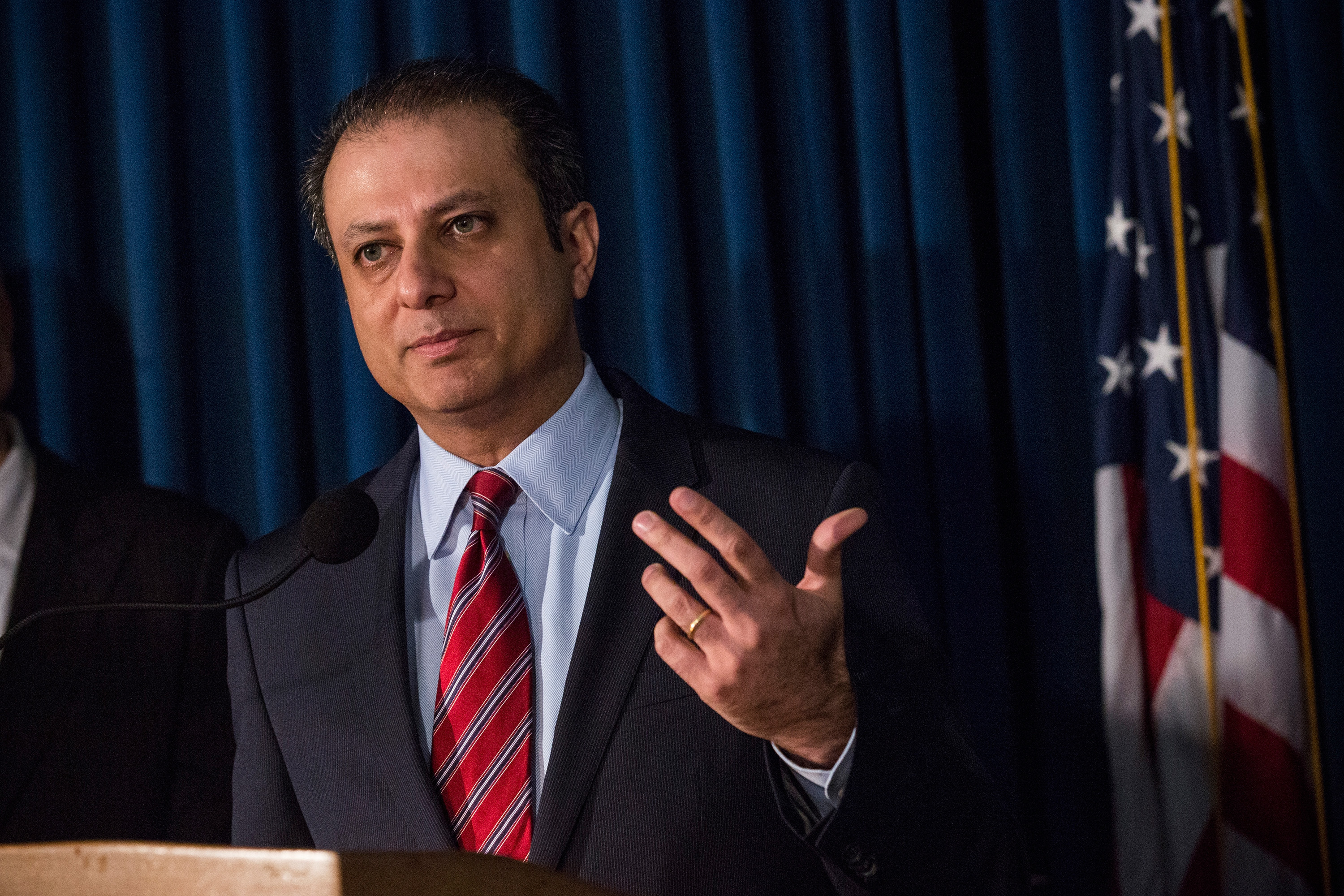 1. U.S. Attorney Preet Bharara: When it comes to former legislative leaders, Mr. Bharara is now two-for-two: a jury found former Senate Leader Dean Skelos guilty today, just weeks after another jury found former Assembly Speaker Sheldon Silver guily. Mr. Bharara is having an unprecedented run when it comes to taking down pols accused of public corruption, shaking up an Albany where the status quo has reigned and where business-as-usual has always looked suspiciously like illegal activity. In addition to winning, Mr. Bharara’s developing an incredible profile in state politics. When he joined Twitter this week, politicos were in a tizzy—it’s rare that 140 characters draws that much attention, but Mr. Bharara’s social media callback to his warning that crooked politicians should “stay tuned” lit up Albany Twitter. All that buzz might come in handy—Mr. Bharara will likely be out of a job when the next president wants to pick his or own U.S. Attorney for the Southern District. Whats’ next for him? Stay tuned.

2. Veterans: After months of intense lobbying by veterans groups—including several highly critical City Hall steps press conference—Mayor Bill de Blasio finally changed his tune on legislation to create a Department of Veterans Services, which he signed yesterday after months of opposition. Groups like the New York City Veterans Alliance and the Iraq and Afghanistan Veterans of America were relentless—and unafraid to criticize the mayor in the press—in their pursuit of the legislation, as was Councilman Eric Ulrich, a Queens Republican who received by far the most cheers at the bill signing on the Intrepid Thursday. It remains to be seen how the new department will differ from the Mayor’s Office for Veterans Affairs—the department will be led by MOVA’s leader, retired Brig. Gen. Loree Sutton—but it seems Mr. de Blasio was finally convinced he didn’t want to be on the other side of a straightforward and universally supported issue: helping veterans.

3. Melissa Mark-Viverito: Want to get dozens of reporters and cameras to show up to a press conference? Bash Donald Trump. That’s a lesson Ms. Mark-Viverito, the liberal, Latina City Council speaker, has learned well in the last few weeks, culminating in a well-covered anti-Trump rally on the City Hall step this week. For Ms. Mark-Viverito and other liberal pols in the City Council, there’s no downside to speaking out against Mr. Trump’s idea to stop Muslims from coming into the country.

1. The Skelos Family: What is there even left to say about the no-so-dynamic duo of Dean and Adam Skelos? Not only are they facing more than 100 years in jail after a jury found them guilty of a slew of public corruption charges, but they were thoroughly humiliated in the course of a multi-week trial that featured wire taps in which the two bashed Gov. Andrew Cuomo—Adam Skelos called him a “pussy”—and in which Adam discussed an affair he was apparently having and hoping his wife would overlook thanks to his purchase of a puppy. (Side note to married women everywhere: be suspicious of new puppies!) Even if the men had been acquitted, this stuff would have been hard to recover from. But of course, an acquittal was not meant to be—the jury barely took eight hours to weigh it over and find the pair guilty. Gail Skelos, Dean’s wife, who had read the Bible and self-help books during the trial, wept in the courtroom.

2. Mayor Bill de Blasio: The mayor had to take time out of an unrelated press conference on Thursday to, unprompted, mount a defense of his affordable housing plan and the attached zoning changes. Mr. de Blasio seemed to be trying to turn a growing tide of opposition to his plan—the vast majority of the city’s community boards have voted against and it is not finding favor with borough presidents, either. The City Council is the only vote that counts, but the opposition at the community and borough level does not set the kind of stage Mr. de Blasio might have been hoping for heading into Council negotiations, and puts pressure on Council members who will vote on it. Mr. de Blasio got a boost this week from two major labor unions and the AARP, which endorsed his plan. And Manhattan Borough President Gale Brewer became the first elected official to do so, signing on to one zoning change—Mandatory Inclusionary Zoning—but not recommending a second part of the plan, which would allow for taller buildings. And to top off a bit of a rough week, Mr. de Blasio is undergoing surgery today for a hernia. Expect the mayor to try to bounce back next week as his housing plan is taken up by the City Planning Commission.

3. Assemblyman Michael Blake: It’s not often getting a new gig means you had a bad week, but Mr. Blake may have had the worst timing in history with his new job working for Hilltop Public Solutions. He announce the job just hours before the guilty verdict in Mr. Skelos’ case. The twin trials of Skelos and Silver have highlighted the thorny issue of Albany lawmakers taking outside income, making the subject more than a little toxic—which is perhaps reflected in the fact that a lengthy press release about Mr. Blake’s hiring never mentioned his elected position, for which he is paid $79,500 a year, plus per diems.

A tie between the ongoing drama of the Albany corruption trials and Mr. de Blasio trying to get his groove back on the affordable housing front.

All eyes will be on Albany after the guilty verdicts for Mr. Silver and Mr. Skelos. Their names have already been scrubbed from their offices, but good government groups are hoping that they’ll have a lasting impact—ethics reform legislation. Of course, when you’re asking the State Legislature to reform itself, it’s a pretty big ask, especially for those hoping they’ll ban their own outside income.

Mr. Silver and Mr. Skelos share a dinner of branzino and brainstorm on how to start federal prison caucus of their former legislative houses.

Albany legislators will go on collecting outside income, conflicts of interest be damned. 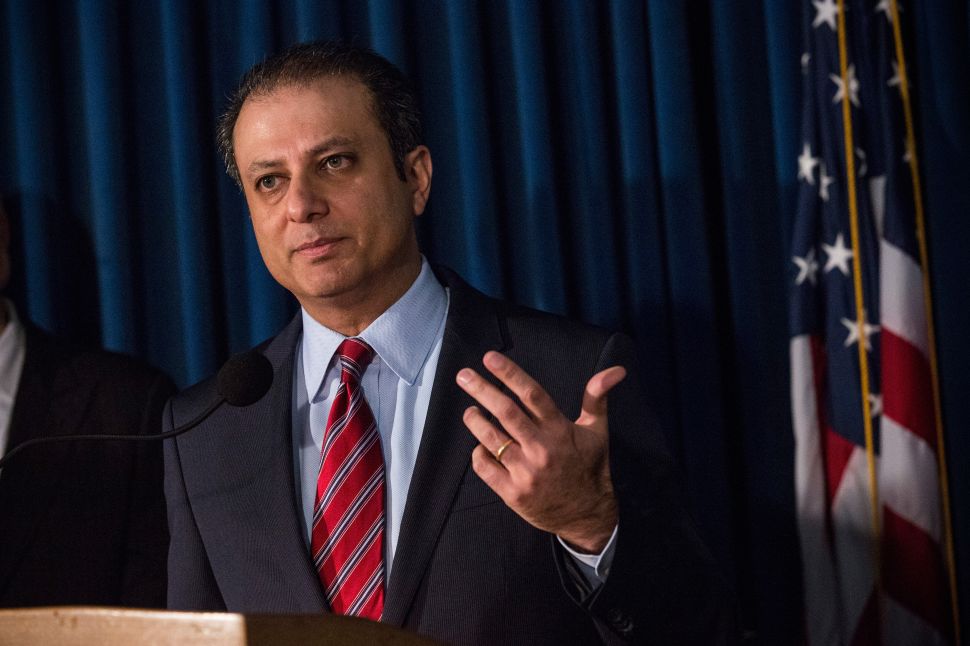