GARFIELD – What is now a nondescript paved lot on Clark Street in Garfield was once the site of the E.C. Electroplating plant. In 1983, a chemical storage tank failure dumped three tons of carcinogenic chromium into the ground, leaving some residents unable to enter their basements even to this day. While the site has made significant progress—the building was torn down and 14 feet of contaminated soil was replaced with clean soil and then paved over—the fight still isn’t over as the EPA fights to resolve groundwater issues caused by the more than 30-year-old spill and subsequent environmental damage.

Funding for cleanup at the Garfield Groundwater Contamination site is only secured until 2017. Remediation will not be completed unless an alternate funding source can be secured.

On Monday, Senators Cory Booker and Bob Menendez, Congressmen Bill Pascrell (D-8) and Frank Pallone (D-6) and local administrators gathered at the site to announce the reintroduction of legislation in both the Senate and the House that would require the industries that contaminated Superfund sites to fund cleanup.

“You make the mess, you clean in up. It’s as simple as that,” Menendez said from within the gated area that blocks the hundreds of homes in the neighborhood from the former site of E.C. Electroplating. “If you profited from polluting the environment then you should pay to clean up the mess you leave behind.”

The act the legislatures are introducing is called the Superfund Polluter Pays Restoration Act of 2014. It reinstates an excise tax that requires polluters to pay for cleanup, shifting the burden away from taxpayers. The legislation proposes to reinstate the Internal Revenue Code of 1986 to restore the financing for the Hazardous Substance Superfund, and for other purposes. Last year, Senator Booker chaired a hearing on the need for increased funding for Superfund cleanup. He initially introduced it in June of 2014 but it was never enacted.

“It’s simply unacceptable that communities like Garfield have to languish in uncertainty while Congress fails to address the shortfalls in the superfund cleanup program,” Booker said. “This bill corrects the inexcusable injustice and places the onus on polluting industries to restore superfund sites back to safe, healthy areas that can attract investment and economic development.”

New Jersey has more superfund sites than any other state in the nation with the number on the EPA’s National Priority List hovering around 113 statewide. Due to the hazardous nature of chemical contamination, property values in areas close to these sites often plummets, leaving property owners unable to sell.

The party responsible for the contamination of the Garfield site shuttered in 2009, leaving no funding source for the cleanup. According to Menendez and Booker, the new legislation would protect taxpayers from footing the bill for “orphan” sites such as this one.

The officials will return to Washington, D.C. today. According to Booker, this legislation is a critical one for New Jersey due to the high population density and the number of sites present in the state.

“We much advance this legislation,” Booker said. “We need to convince our colleagues on the other side of the aisle.”

Chromium exposure is linked to a number of health issues including cancer, autism and kidney damage, among others. While chromium is the pollutant most present at the Garfield site, sites can be classified as Superfund for a large number of pollutants not limited to chromium. 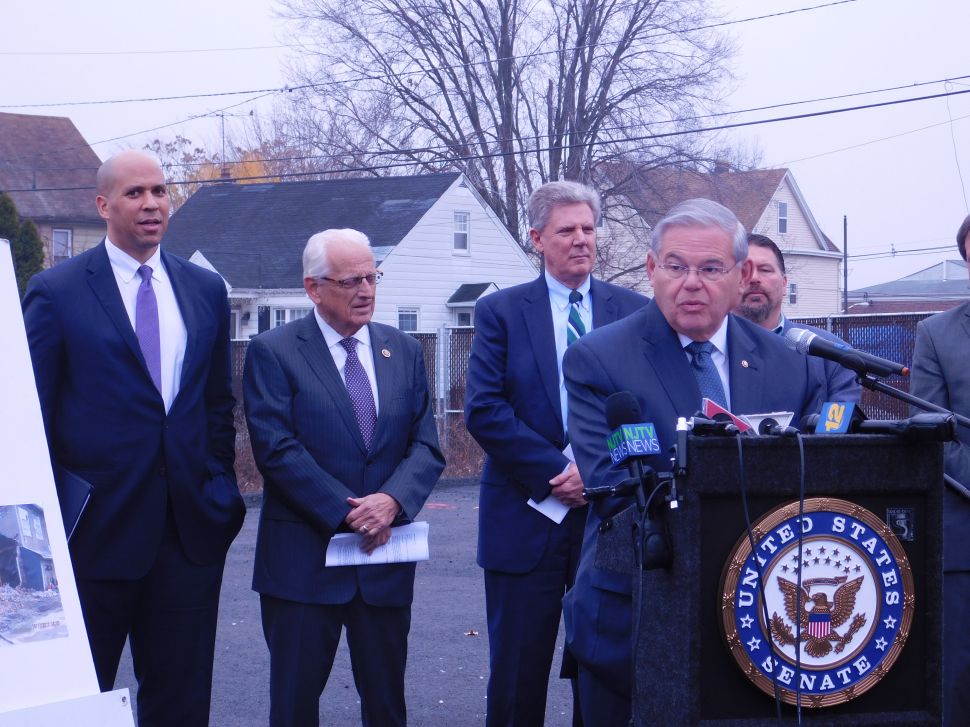