Abbott and Costello. Stiller and Meara. Kiernan and Stelter. O.K., that last name-drop is a stretch, but Pat Kiernan and Jamie Stelter—NY1’s news anchor and traffic reporter, respectively—certainly deserve a mention in the pantheon of endearing duos. Whether they’re singing along to “Dancing Queen” or pranking one another out, their on-air chemistry has earned them a following that extends beyond the morning news. Which is why they’re hosting a comedic talk series at the 92nd Street Y, the next one of which takes place in January. Over lunch in Chelsea, Mr. Kiernan and Ms. Stelter discussed how they really get along off the air.

Do you spend time together outside of work?

Pat: The level of Kiernan-Stelter, outside-of-work interaction is above the average co-workers’, but not up to buddy-movie level.

Jamie: I like to hang out with the Kiernans, but otherwise, I’m like, we see each other every day.

How did you get along when you first started working together?

Jamie: Pat and I are very different; he takes time to warm up to people, whereas I will be your best friend in two seconds. Literally the first day at work was the first time we met. I was so excited that it was going to be this big chummy thing, and he was sort of like, “Hey.” And I was like, “I’m going to make it my mission to get him to like me.”

Pat: Not like you? We do our makeup at the same time. Jamie is, every day, the first human that I spend time with.

Jamie: When I was single, I told him everything that was going on in my dating life. And he’s the one who set me up with my husband [CNN media correspondent Brian Stelter]. I didn’t know he was, like, running back to my husband and telling him everything I was saying.

Pat: Just a little bit of backchannel information is good.

Jamie: He first found me on Twitter, and then he asked Pat right away if I was single.

Pat: I managed to go deep in the Twitter archive and found the first direct message from Brian to me about Jamie, and I had it framed for their wedding.

This question is for you, Pat. Do you ever get tired of slogging through the print news for your daily “In the Papers” segment?

Pat: It’s the most fun part of my day, and I’m terrified that [newspapers] are going to go away before I do. It’s this unique chance to play across the whole news spectrum. NY1 stakes out a relatively high piece of ground as far as the types of stories we cover—there’s not a lot of celebrity gossip. But if there’s important news about, say, last night’s Victoria’s Secret fashion show, I think it’s my duty to send you out the door…

Jamie: We didn’t do a toss about that!

Pat: We have a roadmap of what conversations I toss to Jamie.

Pat: No, they’re loosely planned. Once in a while, when someone wants a fresh reaction from the other, we’ll work behind the person’s back with one of the producers.

You both have the same agent. With that in mind, have you talked about combining forces beyond your daily morning repartee and the 92Y show? I feel like you’re this sort of popular New York duo that could host a talk show or something.

Pat: When we talk with him or with NY1, it’s more in the context of, we’re both employed by NY1, than it is speculating about what could be. I think the 92Y show is borne from that same instinct, which is, when you find chemistry in one place, is it possible to bottle it up and put it somewhere else?

Do the two of you feel really in synch with the city, given your relationship to it on the air?

Pat: Jamie and I both live and breathe the city and get out as often as we can at night, so I feel in touch with it but I always feel like I could be more in touch. Like, I had to get something done to my car, and the place it had to be done was deep, deep, deep, deep into Queens—the fringe of the Queens-Nassau line. You’re like, “These people are our viewers and life in this neighborhood is so different from what we think of as the heavily urbanized Brooklyn-Manhattan-Queens-Bronx areas.”

Jamie: Twitter and Instagram help also, because besides people constantly tagging us in things, it also makes it easier to stay dialed in and to know what’s going on.

You both wake up at ungodly hours. Do you nap?

Jamie: I try to go right from work to an early workout class, and then stay up, make an early dinner and go to bed early.

I hope I’m not interfering with that. 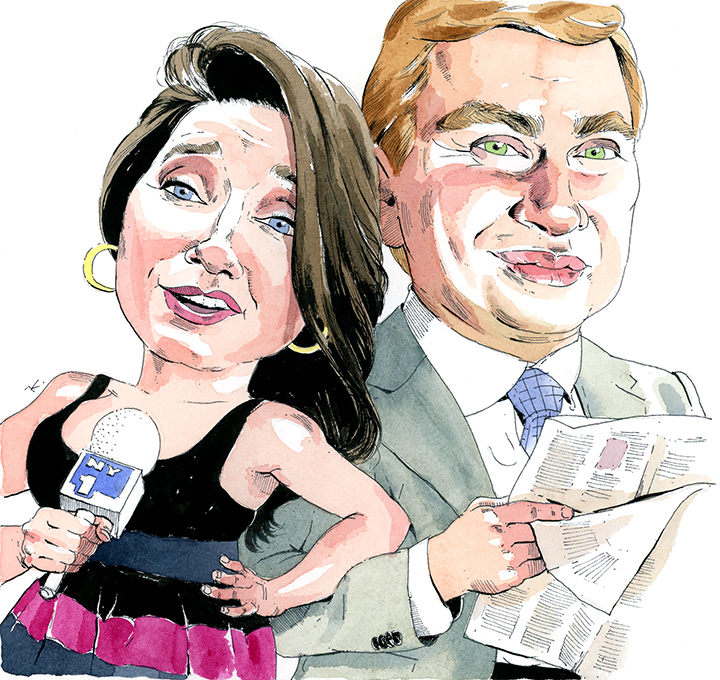