Wednesday’s mass shooting in San Bernardino, California has led to a media uproar about gun violence—journalist Igor Volsky exposed congressmen who had received money from the NRA, and the New York Daily News has run provocative covers about gun control for the past few days.

But the media may have finally gone too far in its pursuit of answers about the shooting.

On Friday afternoon, both CNN and MSNBC ran live reports from the home of the suspects in the California shooting, Tashfeen Malik and Syed Rizwan Farook, which is still an active crime scene. Anchors on both networks went through the suspects’ belongings—at one point MSNBC showed Mr. Farook’s mother’s driver’s license without blurring her private information (in hacking terms, this is referred to as doxxing).

MSNBC weekend anchor Melissa Harris-Perry was horrified by her network’s actions, but she was far from the only one:

There is literally no breaking news re: the #SanBernadino. @CNN and @MSNBC literally just created chaos and called it "breaking news."

MSNBC is doing something so stupid that even Twitter can agree that it's stupid. That's a special kind of stupid.

OK, now I'm going to go out and buy a gun to protect myself from MSNBC news crews.

Think of every bad decision you made this week. Now tell yourself, Hey, I'm not MSNBC.

"This has been Rita Skeeter for MSNBC."

MSNBC digging through personal items, including the child. This is CRAZY. pic.twitter.com/wYIuiTfGNT

Let’s all be thankful Don Lemon wasn’t around to make things even worse. 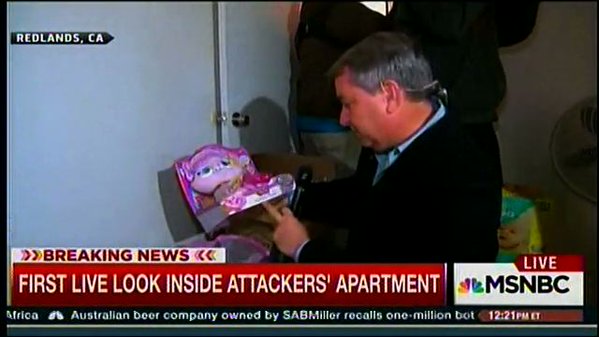