Good morning, it’s Wednesday in New Jersey, where the talk around coolers is how Chris Christie did in the debate, and politicians are planning to advance plans for casinos in the northern counties.

Quote of the Day: “I am sticking with ‘no.’ In the event of a more comprehensive bill coming forward, it has my unequivocal support.” – Assemblywoman Holly Schepisi, vowing to support Gov. Chris Christie’s veto of a Democratic gun control measure.

Source: Senate and Assembly Compromise on Gaming Expansion to Come by Friday
A source close to the Assembly Democrats told PolitickerNJ that a compromise between competing proposals to allow new casinos in North Jersey should arrive by the end of this week. The two bills will be going to committee Thursday. The conflict between Senate President Steve Sweeney’s (D-3) proposal and Assembly Speaker Vince Prieto’s (D-32) stems from Atlantic City’s share of the proceeds, with Sweeney’s offering a greater portion of the new casinos’ revenues to the ailing gaming capitol.
JT Aregood, PolitickerNJ Read more

Prieto Takes Aim Again at Veto Override of Gun Safety Bill
The Assembly Democrats on Thursday will take another crack at overriding Gov. Chris Christie’s vetoes of legislation to require notification of local law enforcement before expungement of mental health records of prospective firearms purchasers and enhance protections for victims of domestic violence by requiring attackers to surrender their firearms while domestic violence restraining orders are in effect.
Max Pizarro, PolitickerNJ Read more

Schepisi on Gun Override: ‘I Don’t Care If He Puts It Up a Hundred Times’
On Thursday, Assembly Speaker Vincent Prieto will reintroduce a vote in the Assembly in an effort to override Governor Chris Christie’s veto of gun legislation aimed at making it more difficult for those with a mental health record to get guns. Earlier this month, the Assembly was unable to repeat the success of the state Senate who overrode the veto in October. Not enough Assembly Republicans parted ways with Governor Christie, leaving the Dems three votes shy. Prieto’s decision to reintroduce the vote suggests that he may have secured the Republican votes to complete the override.
Alyana Alfaro, PolitickerNJ Read more

Bergen Sheriff Saudino: ‘There is no Place for Politics in Law Enforcement’
With the year winding down, eyes around the state are starting to turn to the 2016 election. In Bergen County, November will see Republican Sheriff Michael Saudino working to keep his seat.
Alyana Alfaro, PolitickerNJ Read more

Dems To Take Aim at Republicans’ Gun Control Records in Second Override Vote
As Assembly Speaker Vince Prieto (D-32) prepares to mount a second override vote against Governor Chris Christie during Thursday’s session, Democrats are calling the vote a chance for Republican delegates to vote in a fast-acting gun control bill instead of starting over with new Republican bills after Christie’s conditional veto. But Democratic strategist Mike Muller said that this second override is also an attempt to publicly force the Republicans’ hand on gun control as a matter of electoral strategy for 2017.
JT Aregood, PolitickerNJ Read more

What happened at Tuesday’s presidential debate
Republican presidential front-runner Donald Trump said during the fifth GOP debate Tuesday night that he is not trying to isolate the U.S. with his controversial proposal to temporarily ban Muslims from enter the country to protect America from possible terrorism.
Brent Johnson, NJ.com Read more

Dead people get $2M in N.J. property tax credits while home sellers lose $10M
Thousands of New Jerseyans who sold their homes in the year and a half it took the state to issue the most recent Homestead Benefit missed out on $10 million in property tax credits, according to an audit released Tuesday.
Samantha Marcus, NJ.com Read more

Christie to embark on 4-day ‘Telling It Like It Is’ N.H. bus tour
Gov. Chris Christie is taking a page out of U.S. Sen. John McCain’s playbook and hitting the road on a four-day bus tour in New Hampshire this weekend called “Telling It Like It Is” in hopes of winning the state primary in February.
Claude Brodesser-Akner, NJ.com Read more

North Jersey officials huddling over ways to block Pilgrim Pipeline project
On Wednesday, officials from 16 municipalities in the state, including Oakland and Mahwah, will gather in Florham Park to start discussing their next steps in stopping the proposed interstate Pilgrim Pipeline from being installed through their communities.
Marina Villeneuve, The Record Read more

N.J. state workers were paid $2.7M to ‘watch TV, play cards’ after facility closed
In the final weeks before the Christie administration closed a facility in Woodbridge for people with developmental disabilities, hundreds of state workers earned $2.7 million just for showing up — including some seen playing cards and watching TV, according to a report by the Office of the State Auditor.
Susan K. Livio, NJ.com Read more 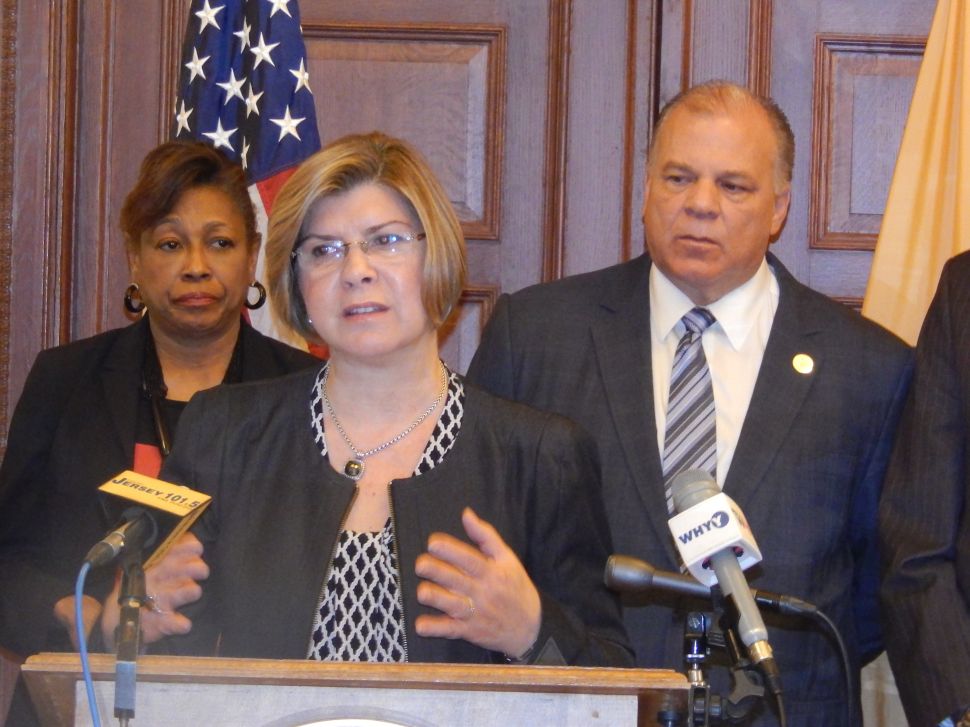