BREAKING NEWS: President Underwood will be making a special announcement tonight during the #GOPDebate.

A fake Netflix president Tweeted he will make an announcement during a debate for the actual, real life presidency…a debate that happens to include Donald Trump. If that isn’t peak 2015, I don’t know what is.

That’s right, House of Cards‘ Frank Underwood (Kevin Spacey) has a “special announcement” for us all, and he’ll give it during tonight’s GOP debate.

The obvious guess here is a premiere date for the Netflix original’s fourth season, maybe even with a trailer to go along with it. Perhaps we’ll get some answers on the state of the Underwood union? After all, we left Frank and Claire (Robin Wright) in kind of a rough place–Frank couldn’t force himself to make love to her, came pretty close to hitting her in the  Oval Office, then Claire said “eff this” and left Frank…classic first family stuff.

But we can’t really rule anything out, either. Maybe Frank just needs the world to know his personal bodyguard fell into a vat of chemicals and is now referring to himself as Mr. Freeze. 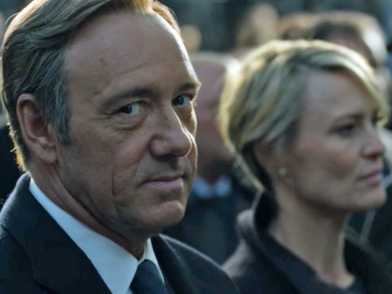