The city’s financial overseer unveiled the report at a presser at the Alfred E. Smith Houses in lower Manhattan, a complex slammed in the 2012 superstorm and left without electricity or working pipes for weeks afterward. Mr. Stringer said an investigation of 13 projects, interviews with employees and a review of the authority’s internal documents revealed that its emergency plans lacked a clear chain-of-command, that its personnel lack adequate resources and training, that it has failed to compile a complete list of residents with disabilities, that it has lost track of most of its emergency generators and that it has conducted drills in a haphazard and disorganized manner.

The comptroller’s office said that NYCHA possessed little more than “a mishmash” of data on its most vulnerable tenants, many of whom found themselves stranded in their homes amid the floodwaters three years ago, and had failed to keep track of the residents it had been in touch with after the storm. The audit also alleged that the authority’s Emergency Procedures Manual does not clearly delegate responsibilities, and that staff were often unclear on how they would react to another natural disaster.

In addition, NYCHA’s records on its back-up generators were often at odds with the reality at the developments, with complexes often having more or fewer generators than the inventory showed.

The study was just the latest in Mr. Stringer’s vowed “top-to-bottom” review of the troubled housing authority and, like most of the audits thus far, NYCHA rejected most of his findings. The authority responded with its most aggressive rebuttal yet, accusing the comptroller of deliberately “cherry picking” data so as to make NYCHA look bad.

In particular, it noted that the audit covered July 2013 and February of this year—which NYCHA alleged was an intentional attempt to ignore what it deemed its effective responses to the Legionnaire’s disease outbreak over the summer, to the security concerns surrounding Pope Francis’s visit in the fall and the approach of Hurricane Joaquin shortly afterward.

“With the new year, we hope the comptroller’s office will seek an elevated and more productive discourse with NYCHA—a partnership to unearth real issues where they exist,” said spokeswoman Jean Weinberg. “Unfortunately, this audit was a missed opportunity.”

The harsh magnifying glass Mr. Stringer has put on NYCHA is just one theater of his ongoing rivalry with Mayor Bill de Blasio, a fellow Democrat who appoints NYCHA’s board and chairperson. 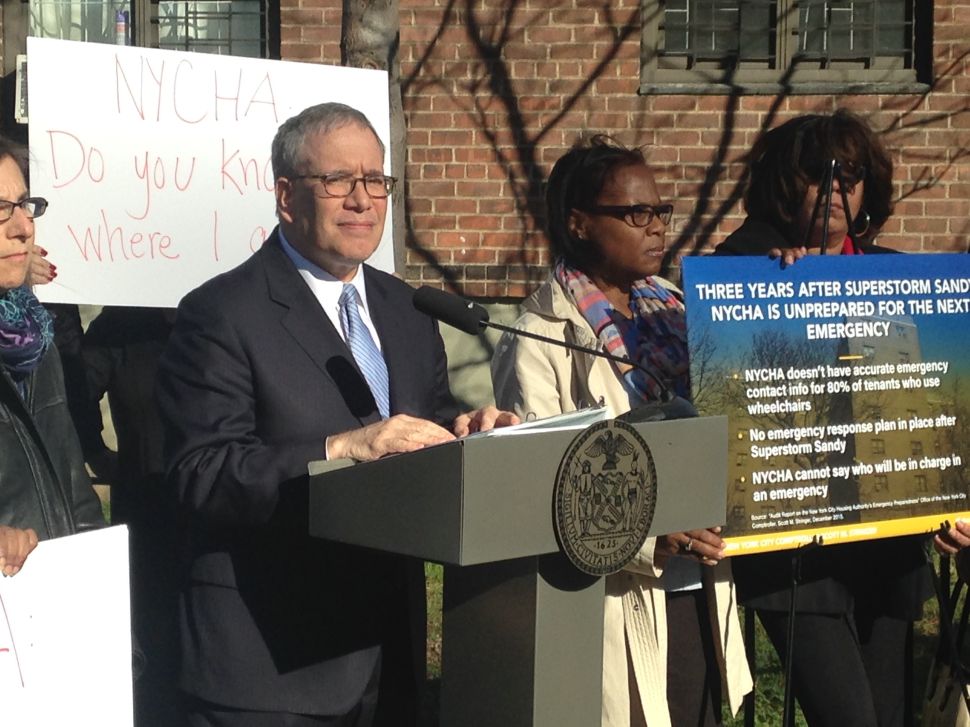