UNION – State Senator Ronald Rice (D-28) joined a coalition of black ministers on Kean University’s campus Friday as they called for the resignation of President Dawood Farahi. The ministers and their supports claim that the president’s administration wrongly discriminates against women and minorities.

Reverend Ronald Slaughter was one of the main event organizers. He said that the protest was held in an effort to “end gender discrimination and end structural racism.”

Rice, though he is not from Union County, said that he chose to support Slaughter and the ministers in their actions because of the way the perceived structural racism negatively impacts students.

“If, in fact, minority students are impacted in a negative way what people don’t realize is that it impacts non-minority students also,” Rice said. “We think that it is very important that everyone from New Jersey know the truth.”

According to Rice, it is the duty of legislatures to “correct the wrongs” at institutions like Kean. In order to do that, he has put forth the idea that Kean undergo an independent forensic audit to determine what the issues are and how they can be remedied.

“Our position and conversation as legislatures is to call for an investigation because we need to know the facts of what is taking place,” Rice told PolitickerNJ. “We thought that the board members that we spoke to would make a request to the appeals to have that done but I am not sure they did that. If they don’t do it we are going to have to figure out in the legislature how to get it done.”

Other speakers at the event included president of the Kean Federation of Teachers-AFT Local 2187 James Castiglione and New Jersey NCAA President Richard Smith.

One legislature that was missing was state Senator Ray Lesniak (D-20). Kean falls in his district and the senator has been vocal about his support of Farahi throughout the call for ministers to resign.

According to Smith, Lesniak’s lack of support show a lack of desire to “do the right thing” despite a growing number of those against Farahi.

However, Lesniak is far from the only Union County leader in Farahi’s corner. On Wednesday, the entire Union County leadership delegation, including Republican leaders Senator Tom Kean Jr. and Assemblyman Jon Bramick, sent a letter to Farahi supporting his position as Kean president. According to the letter, the leaders “wholeheartedly support Dr. Farahi and his visionary leadership as he moves Kean University forward.”

Friday’s action is the most recent in a series of events at Kean that Slaughter says demonstrates the issues with Farahi’s administration. Last month, fraudulent Twitter threats against black students at the school brought Kean’s issues into the spotlight. Additionally, Farahi has gotten negative attention for faculty layoffs and the purchase of an almost $200,000 conference table. In October, the school came to a $75,000 settlement with a former employee who claimed she was dismissed due to “her race, and/or age and/or gender.” 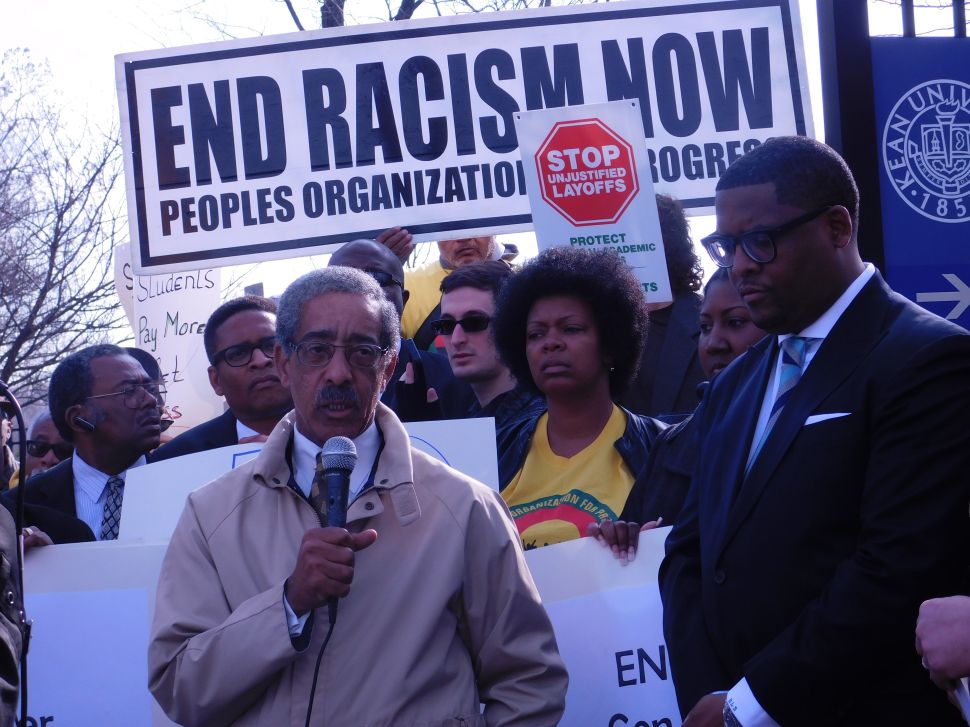